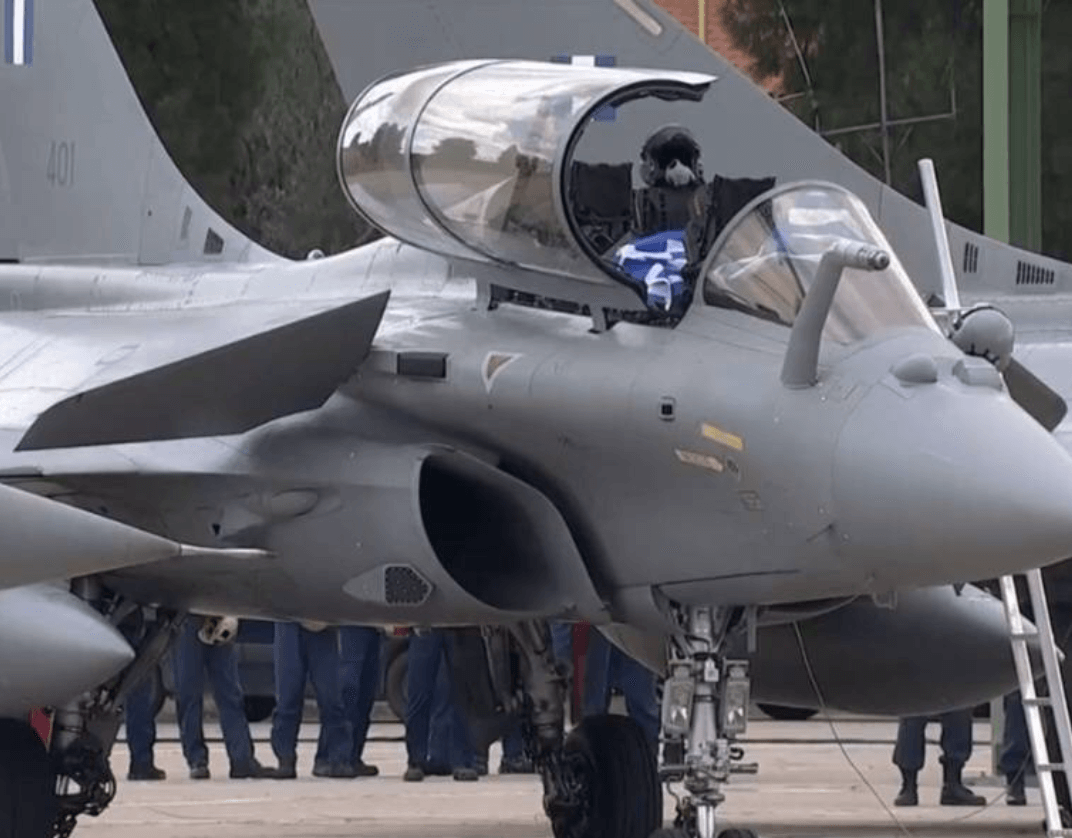 Today’s arrival of the Rafale F3R Hellénique marks the end of an era for the Hellenic Air Force’s Mirage 2000 EGM / BGM fighter jets.

The Mirage 2000, largely responsible for the decades-long deterrence in the Aegean, have reached their lifespan at the 332nd All-Weather Squadron, where they served for 34 years defending national interests and helping to maintain the security and integrity of the Homeland, Wing Commander Michael Koutris stated.

At the 114th Combat Wing at Tanagra Air Base, the end of the Mirage 2000 service simultaneously marks a new era not only for the Air Force, but for the Hellenic Armed Forces as a whole. The 332nd Squadron bids farewell to the Mirage and today welcomes the state-of-the-art Rafale.

The first Rafale fighter jet landed at 12:45 after crossing the Acropolis earlier.

Welcoming the aircraft, the control tower said: “Welcome to your new home. We wish for safe landings”. For his part, the Squadron leader of the first 6 Rafale stressed: “Greece, we will be worthy of your expectations. The 332nd Squadron flies into the future.”

Specifically, two of the six Rafale are two-seater to be used for the training of new pilots, while the other four will be single-seater. The training of eight pilots and 50 aircraft technicians has already been completed at the Merignac base in France.

In Tanagra, the arrival ceremony of the French fighter jets was attended by, among others, Prime Minister Kyriakos Mitsotakis, the Minister of National Defence, Nikos Panagiotopoulos, the Chief of the Hellenic National Defence General Staff, General Konstantinos Floros, the Chief of the Hellenic Air Force General Staff, Air Marshal Georgios Blioumis, and the French Ambassador to Athens Patrick Maisonnave.

During his greeting, Prime Minister, Kyriakos Mitsotakis, stressed that “our country is proud to welcome the first 6 of the state-of-the-art Rafale,” describing them as “a force multiplier that shields our country, a clear example of the fact that Greece changes and flourishes both in defence and diplomacy.”

“The new aircraft are here, 16 months after their order, ready for combat as the crews and support teams have completed the training,” said Mr. Mitsotakis, reiterating that the next six platforms will arrive in 2022 and the 3rd batch (of 6) by mid-2023, to be followed immediately by the delivery of another six aircraft of the overall armament plan.

“This is a geostrategic evolution frontline because these new fighter jets make the Air Force one of the strongest in Europe and the Mediterranean, which contributes to the diplomatic power of the country and seals the diplomatic alignment of Greece and France,” he said, adding: “The new Rafale is ready to take off for a new, more peaceful tomorrow in the region.”

The Prime Minister reminded that soon these aircraft will operate next to new French frigates with which they share not only weapon and electronic systems, but also a common network-centric philosophy.

In Kalamata, he continued, the new International Aviation Training Center will be inaugurated in the near future, while within the year our Navy will receive the first two of its seven brand new anti-submarine warfare helicopters as well as the much-needed torpedoes for the Greek submarines. Finally, the Army will procure modern ammunition for the tanks.

“We do not need anyone’s permission to acquire the Rafale. Our country, closing the door to any threat, keeps the windows of dialogue open,” he noted and concluded: “May the new Rafale fly safely”. 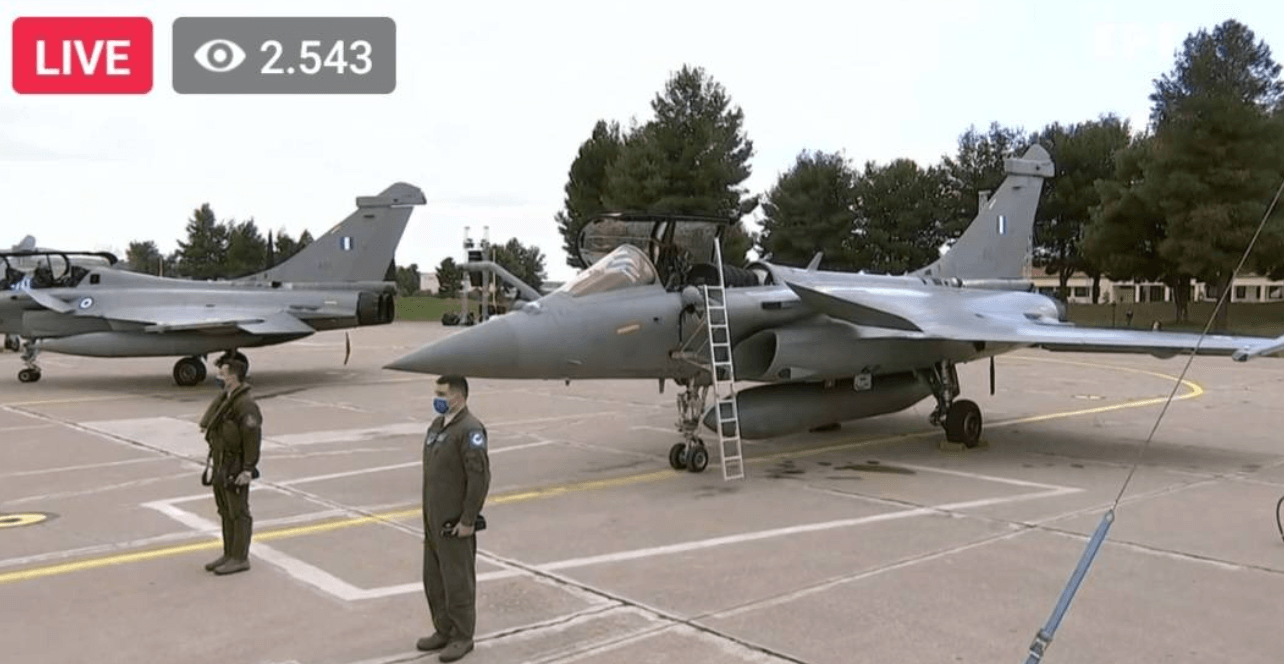 The reference of the Prime Minister to the personnel is also considered important, stating that “above all, investing in defence means investing in the people who serve it and for this reason, I want to announce a serious return of our country to the great servicemen.

“From now on, air and naval benefits related to flights, paratroopers’ operations, our submarine operations, underwater demolition missions and minesweepers are exempt from any tax. This measure concerns mainly the Hellenic Armed Forces, but also the Hellenic Police, the Fire Service, and the Hellenic Coast Guard and it applies to the compensation of the officers who provide medical assistance using air means.”

Speaking to Politico, Mr. Panagiotopoulos called today’s aircraft arrival special in terms of strategic Greece – French cooperation. “It’s a special moment for our strategic cooperation with France, but also for our common vision of European defence,” he said. “These next-generation superior aircraft are multiplying the Air Force’s deterrent power, strengthening our capability to meet any security challenge in our area,” he said.

The contract for the purchase of 18 Rafale fighter aircraft (six of which are new and 12 used) was signed about a year ago – on January 25, 2021 – by the Minister of National Defence, Nikos Panagiotopoulos, and his French counterpart Florence Parley. Their acquisition along with their armament will cost 2.32 billion euros. In total, Greece will procure 24 Rafale fighter jets. The additional contract for the purchase of an additional six new Rafale fighter jets is expected to be signed in the coming weeks.