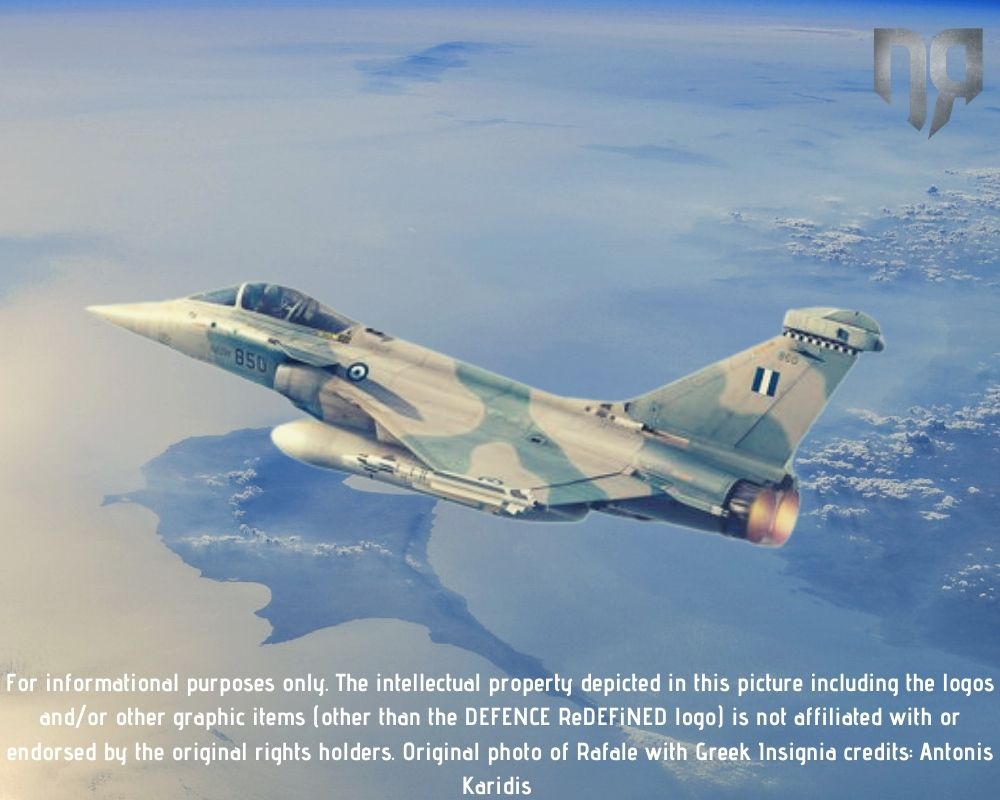 This article will try to address whether Rafale is a Fighter aircraft which Senior Commanders need to carry out a variety of missions at hostile environments. It will also address the way it can support the Integrated Defence Doctrine between Greece and Cyprus.

Rafale is a multi-role, twin engine Fighter aircraft, which based on its Sensor suite and weapons inventory can be used in a variety of missions, such as Fighter Area of Responsibility (FAOR), Close Air Support-(CAS), Strike, Aerial Reconnaissance, as well as Tactical Support for Maritime Operations, (TASMO).

Rafale is equipped with the RBE2-AA, an Active Electronically Scanned Array (AESA), Active Array (AA) radar which is capable of detecting and tracking simultaneously and accurately a great deal of air and maritime targets in all-weather conditions and in severe jamming environments. Its Synthetic Aperture Radar (SAR) capability is capable of generating in Real Time,(RT) three-dimensional maps for terrain-following above uncharted terrain in blind conditions. 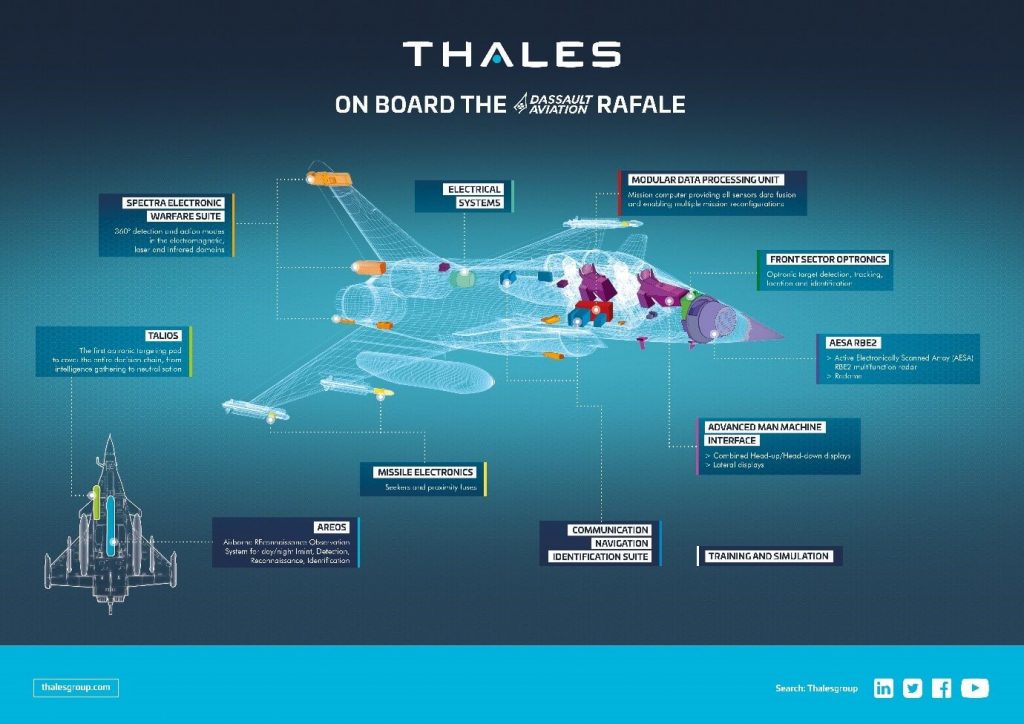 Its powerful TV sensor (cued by the Rafale’s active and passive sensors) is truly valuable to positively identify targets in situations where a visual contact is required by the Rules of Engagement, (ROE).

The targeting and laser designator pod, brings full day and night surveillance and laser designation capability to the Rafale, with remarkable precision. It permits laser-guided weapons to be delivered at stand-off ranges and altitudes.

The Reconnaissance pod is capable of obtaining high resolution images operating at Stand-off distances from high to low altitudes.

The Combined Interrogator-Transponder (CIT), can interrogate targets in different modes, both civil and military, including the secure Mode-4 and potentially Mode 5. Mode 5 uses a lethal interrogation format, which is used by a “shooter” prior to weapons release to reduce fratricide. A combination of Platform Identification Number (PIN) and National Origin (NO) will provide a Mode 5 unique identifier for the transponder. Mode5 capability can contribute to the overall Combat Identification (CID) process, thus avoiding Fratricide, or in other words “Blue-on-Blue” engagements.

“Spectra” Electronic Warfare (EW) suite includes a Passive Detection System,(PDS), which detects and analyses intercepted emitters based on an on-board library, a Threat warning capability which warns the Pilot of hostile missiles, lasers and radars, thus allowing him to react properly. It shall be pointed out that all the above briefly described sensors contribute to the generation of a Common Operational Picture (COP), the creation of the Enemy Electronic Order of Battle, (EEOB), and the most important, they improve Pilot’s Battlespace Situation Awareness, (BSA).

Rafale can carry a great variety of Air-to-Air, Air-to-Surface, and Air-to-Ground weapons. Indicatively we mention the following:

Meteor: An Active Radar Guided Beyond Visual Range Air-to-Air Missile (BVRAAM) with a range over 100 Km, which can operate even in a heavy electronic countermeasures environment. A two-way data link enables the launch aircraft to provide mid-course target updates or retargeting if required, including data from off-board third parties, (e.g. Third Party Targeting Sources- (3PTS).This capability is of paramount importance when attacking moving targets.

Picture below shows the different phases of a target engagement, when more than a sensor is in the loop. 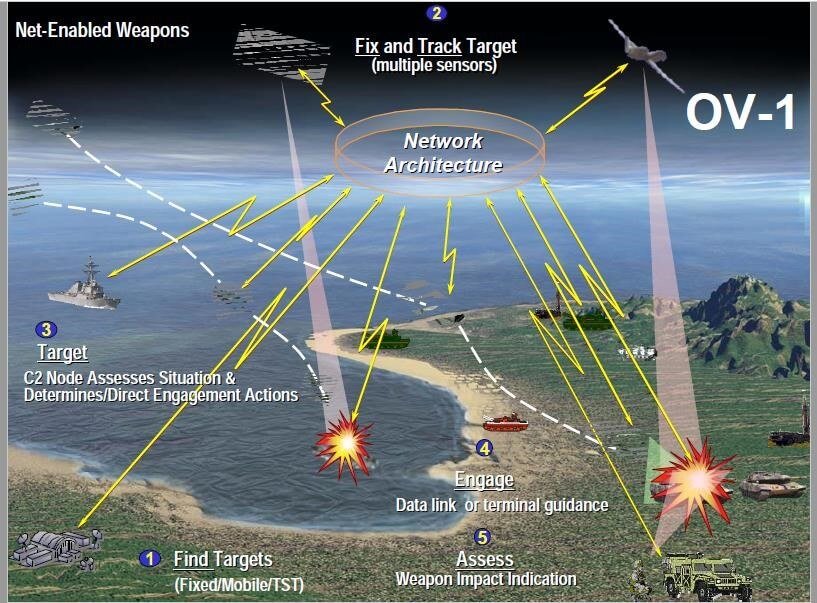 Its superior kinematic performance and the clever boost-ramjet propulsion system makes it vastly superior to anything else in the market.

Mica: A solid propellant–fuelled, multi-mission, air-to-air missile that can be integrated onto medium-to-lightweight, modern multi-role combat aircraft such as Rafale. Target designation for the missile is provided by electro-optical sensors, radar and helmet-mounted sight. 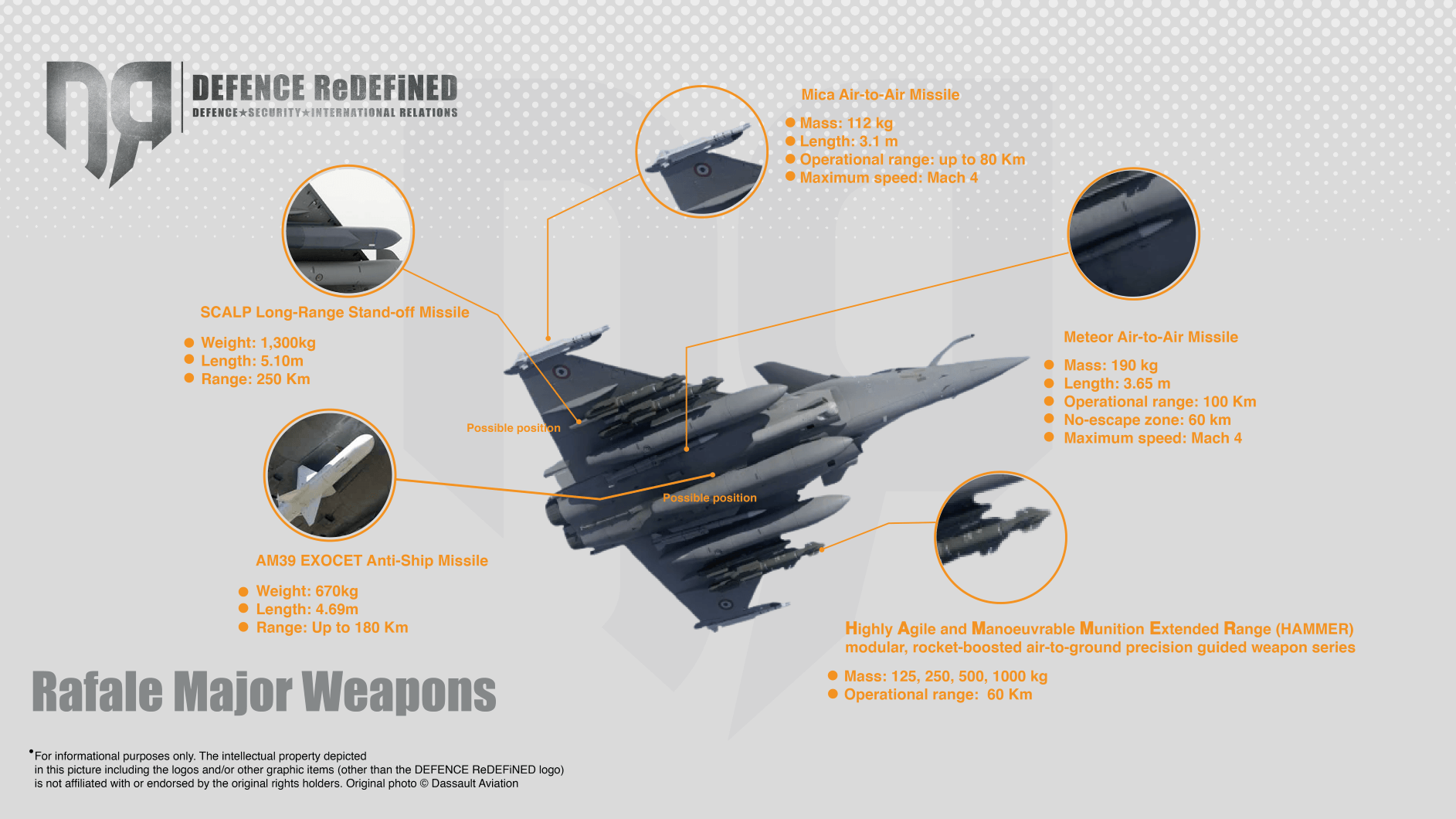 Exocet: The Air-launched missile is guided inertially in mid-flight and turns on active radar late in its flight to find and hit its target. As a countermeasure against air defence around the target, it maintains a very low altitude during ingress, staying one to two meters above the sea surface.

SCALP-EG: It is an Air-to-Ground missile, which can be used in offensive operations to strike targets at very long ranges.

In a crisis situation, Rafale fighter aircraft can support the integrated AD doctrine by conducting a number of missions depending on its configuration. Missions can be conducted either from mother air bases or deploying physically to Cyprus. Here is a description of some of the potential missions:

Formation(s) of Rafale fighters can patrol within the FAOR using any pattern or tactic deemed appropriate by the pilot in command. FAORs will be normally oriented parallel to the expected threat direction, and will be flown at altitudes which maximise the effectiveness of the Meteor and MICA missiles. Rafale’s low Radar Cross Section (RCS) and reduced Infra-Red (IR) signature make it difficult to detect.

While en route, as well as during patrol, formations will have to be under control of the ERIEYE Airborne Early Warning and Control (AEW&C), which can provide Early Warning (EW) by detecting and identifying low-flying incoming threat, while Rafale’s radar can focus on other threats flying at higher altitudes. 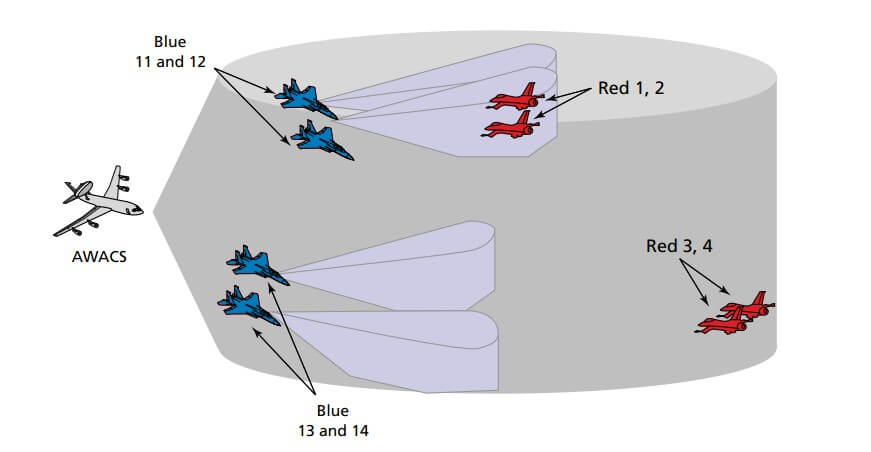 CAS operations are conducted against hostile targets which are in close proximity to friendly forces and which require detailed integration of each air mission with the fire and movement of those forces. Pilots are in close contact with controllers on the ground, (e.g. Tactical Air Control Party-(TACP)), who from a forward position direct the action of combat aircraft engaged in close air support of land forces.

Rafale aircraft can use its powerful cannon and/or guided or unguided bombs to strike enemy forces on the ground.

Picture below shows the connectivity of forces participating in a CAS mission. 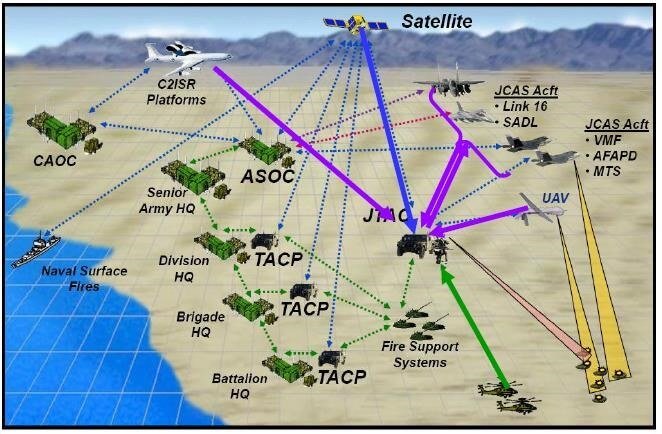 Connectivity of Forces in a CAS Mission

Rafale aircraft flying on a FAOR mission, may be requested by a Naval commander to provide support against threats which might launch weapons well outside the range of organic sensors, (e.g. Defensive TASMO).

In such a case, Rafales can engage enemy Fighters equipped with Anti-Ship missiles before they reach the launching point.

Rafale can also conduct offensive TASMO by performing Pre and Post attack Reconnaissance employing its Reconnaissance pods. Obtained Recognised Surface Picture (RSP) can be sent to ERIEYE which in such a case can forward it to the Naval Task Force (TF) via Link-11A. 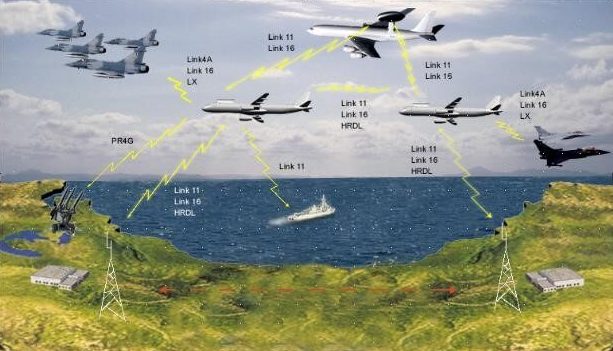 Rafales, once operational, will be called to conduct real-world missions, either by defending the Hellenic Flight Information Region (FIR) and/or supporting the integrated Defence doctrine. They are equipped with sensors and weapons of cutting edge technologies to carry out aforementioned tasks successfully.

Key factors to meeting those challenges are, among others, the integration of all forces in terms of Interoperability and well exercised Tactics, Techniques, Procedures, (TTP). In other words, the loop “Sensor-Decision Maker-Shooter” shall be as seamless as possible.

Also read: Air Vice-Marshal (Ret) Gabriel Dimitriou | “In the past, F-35 were caught on radar by the Cypriot Air Defence”