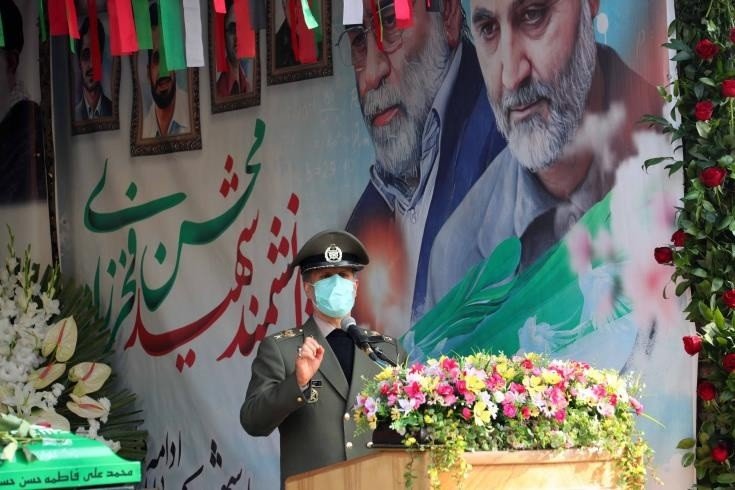 Iran confirmed yesterday that its prominent nuclear physicist, who was assassinated on Friday, had fallen victim to a “complicated” operation involving a “completely new” method and accused Mossad, the Israeli secret intelligence service and outlaw opposition group, for the assassination.

With a protocol reserved for the greatest “witnesses” of the Islamic Republic of Iran, the authorities paid a last tribute to this scientist, Mohsen Fahrizadeh, and promised to continue his work. Authorities have named the deceased Deputy Defence Minister and head of the Defence Research and Innovation Agency (Sepand).

Fahrizadeh was killed, according to authorities in eastern Tehran, in a car bomb attack. Few details became known about the exact circumstances under which the attack took place. According to the scientist’s son, his wife was in the car with her husband, but came out alive. Initial information on possible other deaths was never confirmed.

Speaking during the funeral, Admiral Ali Samhani, secretary of the Supreme National Security Council, spoke of “a complex operation using electronic equipment.” The People’s Mujahideen, an exiled opposition group, “must have been involved” but “the criminal element in all this is the Zionist regime and Mossad,” he said, adding that Fahrizadeh had been the target of the “enemy” for 20 years.”

Without citing sources, Iran’s Fars news agency reported that the attack was carried out with the help of a “remote-controlled machine gun” mounted on a Nissan with an open trailer. Citing an “informed source”, Press TV, an English-language state television news network, reported that weapons collected from the site of the attack had been “made in Israel”.

In Israel, authorities did not respond to Tehran’s allegations. Israeli Prime Minister Benjamin Netanyahu had named the assassinated scientist in 2018 as the head of a secret military nuclear program, the existence of which Iran has always denied.

In Beirut, the Foreign Ministry condemned the assassination and called today “to show as much restraint as possible to avoid the worst case scenario in the region.” Mohsen Fahrizadeh is one of those virtually unknown men who becomes famous after death. Little is known about him, but one thing is certain: he was important.