Statements by Petridis and Panagiotopoulos at the Economist conference – VIDEO
Defence Redefined
Published on 09/07/2021 at 17:30 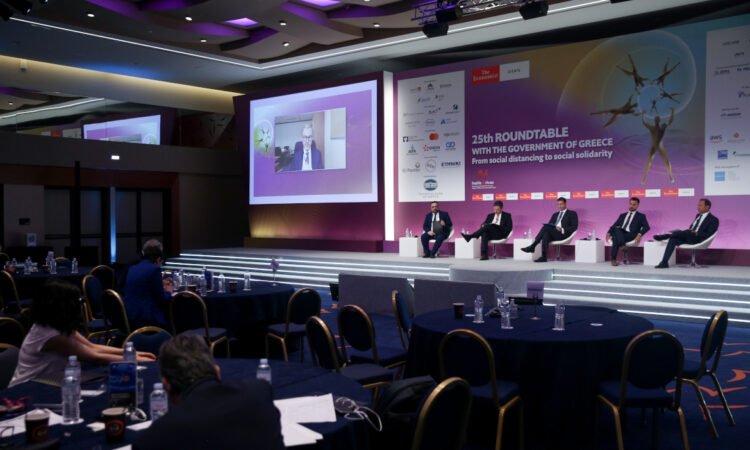 The aim of turning Cyprus into a pillar of stability in the Eastern Mediterranean region was highlighted by the Minister of Defence, Charalambos Petridis, in his speech at the 25th Economist conference held in Lagonissi.

Participating in the panel on “Security Challenges in the Eastern Mediterranean”, Mr. Petridis stressed the importance of regional synergies in achieving conditions of peace and prosperity in the region.

“Cyprus aims to be a pillar of stability for the wider region. In this direction, we are moving forward in bilateral, trilateral and multilateral cooperation within and beyond the European Union,” he pointed out.

In this context, the Minister of Defence made special reference to the relations Cyprus is developing with Greece, Israel and Egypt, while supporting that “it opens doors in the relations between Cyprus and the USA.”

For his part, the Greek Minister of Defence, Nikos Panagiotopoulos, in turn highlighted the role of Greece as a pillar of stability and security in the Eastern Mediterranean region.

Emphasising the importance of ensuring conditions of peace and stability in the region, he noted that Greece is active on two fronts in this direction. “The first is intensive diplomacy. The second is the optimisation of the capabilities of the Hellenic Armed Forces,” he pointed out.

Referring to Turkey’s stance, Mr. Panagiotopoulos spoke of “revisionist and destabilising behaviour”, arguing that “the problem is no longer seen as a bilateral difference between Greece and Turkey or Cyprus and Turkey,” but it constitutes a broader problem of the wider area.

“Turkey’s revisionist behaviour is destabilising the wider region. From Syria and Libya to the Caucasus region,” he said.

“Turkey has become a problem for everyone. The European Union now understands this. I think the United States has already realised that,” he said, urging Turkey to “respect the rules of international law” and “play by the rules.”

The panel also included US Ambassador to Greece Jeffrey Payat, who stressed that the United States is committed to developing military relations with Greece by “upgrading and deepening” bilateral relations and “expanding the Greek-American Defence Cooperation Agreement.”

In particular, regarding military cooperation, the American ambassador referred to the presence of American forces in joint exercises, but also to the cooperation with the Hellenic Armed Forces in Souda, Alexandroupolis, Petrochori and Stefanovikeio. He described “the vision of Greece and the USA for the Eastern Mediterranean as common”, since, according to him, the two countries “share common interests and values”.