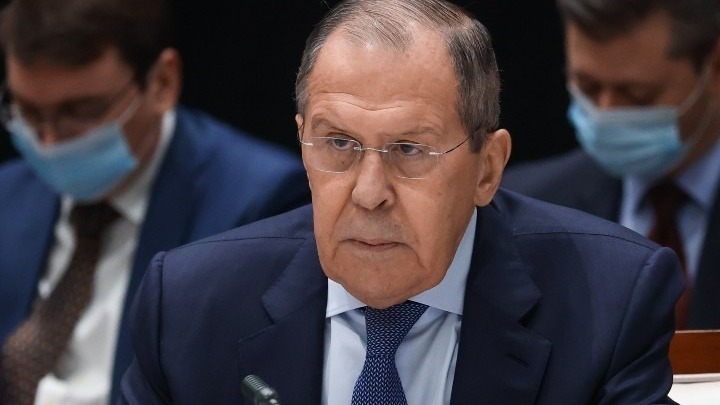 The West longs for some real provocations in Ukraine, said Russian Foreign Minister, Sergei Lavrov, telling the Russian State Duma (lower parliament) that “our Western partners are, without exaggeration, in a kind of war intoxication. That is all they are talking about: we will punish you if you attack, we will save Ukraine, and so on.”

Speaking at a special hearing on Russian foreign policy in the plenary session of the Russian lower parliament, Lavrov said that the removal of Western diplomats from Kyiv only “intensifies the hysteria” at a time when Ukrainian politicians themselves are already calling for calm, “but neither the West nor they want to calm down” and with their “surreal behavior” Western countries seek either “to lure Kyiv into a military operation in Donbas” (i.e.: the Russian-speaking provinces of eastern Ukraine), or “bury the Minsk agreements” to resolve the conflict in the region, which “Moscow continues to insist that there is no alternative for.”

“Moscow is ready for any turn of events,” the Russian Minister said, adding that “we never attacked anyone, we were always attacked in the first place and those who did it always got what they deserved.”

Referring to Moscow’s demand for “security guarantees” shortly before the US formally submits its written responses to the Russian proposals to the Russian Foreign Minister, the latter reiterated that Russia would not agree to a process of “endless talks”, nor with the EU’s ambition to join the debate, but if there is no constructive response and the West continues its provocative line, then Moscow, as President Vladimir Putin has repeatedly stated, will take the necessary response measures.”

“The security of Russia and its citizens is an indisputable priority and will be reliably ensured under any circumstances,” Lavrov said, considering that “US-led Western countries are trying to deal with the objective course of history, they are seeking to secure a unilateral lead for themselves,” while those who think differently and pursue an independent policy, primarily our country and the People’s Republic of China, try, as they say, to punish them with all kinds of inappropriate tools in the form of all kinds of sanctions, demonization in the field of the media, provocations of the secret services and much more.”

“The West is not ready to accept the emerging multipolar world,” he said. Asked about the statements of NATO Secretary-General, Jens Stoltenberg, Sergei Lavrov replied that “for a long time I have not even considered his statements, in my opinion, he has lost touch with reality.”

The Russian Minister said that during Putin’s recent telephone conversations with the presidents of Cuba, Venezuela, and Nicaragua, it was agreed to deepen “the strategic partnership in all fields with no exceptions,” but that Russia’s talks on US-controlled biological laboratories are underway with neighboring countries in order for them to “operate in a transparent manner, without any foreign troops.”

Sergei Lavrov also said that “we are trying to reduce the dependence on the dollar and the Americans are actively helping us in this, because they are doing everything possible to undermine confidence in this currency, to make it dangerous for international trade – not only for Russia, but for every country in the world.”