INTERNATIONAL RELATIONS
Meeting between Dendias and Truss | Activation of the Greek-British Memorandum in the field of Defence
Defence Redefined
Published on 08/03/2022 at 12:15 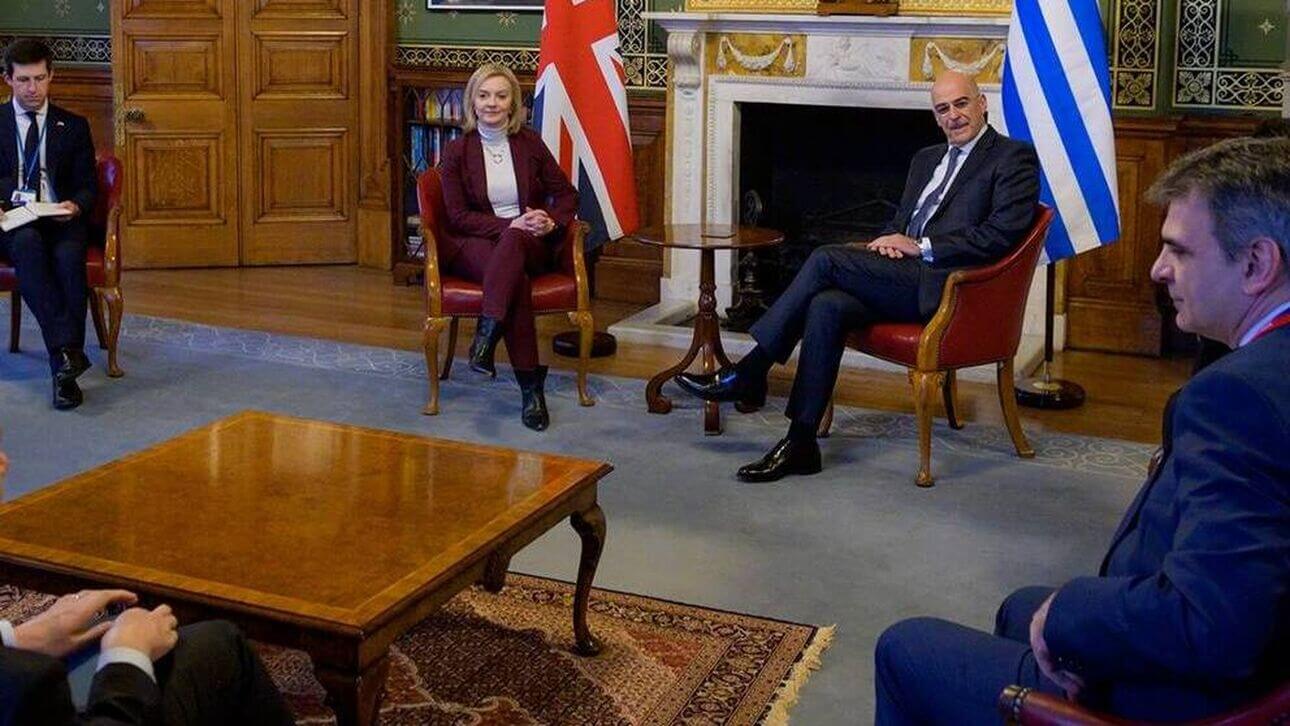 The meeting of Foreign Minister, Nikos Dendias, with his British counterpart, Liz Truss, on the developments in the war in Ukraine took place in an extremely good atmosphere in London.

Ι met with #UK Foreign Secretary @trussliz to exchange views on the security situation in Europe following #Russia’s invasion of #Ukraine, review developments in the #WesternBalkans, #EasternMediterranean, as well as bilateral issues. pic.twitter.com/MdCFWB2mxc

During the meeting, the situation in Europe after the Russian invasion as well as the developments in the Western Balkans were discussed. According to diplomatic sources, the meeting of the two Ministers took place in an excellent atmosphere at the Foreign Office.

The two Ministers exchanged views on the situation in Ukraine and analyzed the scenarios from now on “considering the ways of coordination and cooperation between the two countries to end the war as soon as possible.”

Dendias and Truss also discussed the activation of the Greek-British Memorandum of Understanding, especially in the field of Defence. It is a “Strategic Bilateral Framework”, as it has been characterized, between Greece and the United Kingdom that regulates the relations between the two countries after Brexit, while deepening their cooperation in a wide range of areas from defence and security to tourism and education.

The two Ministers also discussed the situation in the Western Balkans, the Eastern Mediterranean, and the active role that the United Kingdom is called upon to play in the wider region.

Also read: Ministry of Foreign Affairs | Athens’s démarche to Ankara over the challenge of islands sovereignty

Mr Dendias did not fail to thank the British Foreign Office and Mrs. Truss personally for the recent statement of British support regarding the issue raised by Turkey over the demilitarization of the Greek islands following the relevant statements of the head of Turkish diplomacy, Mevlüt Çavuşoglu. It is worth noting that in mid-February a spokesman for the British Foreign Office had made it clear that Britain “does not consider the sovereignty of the Greek islands to be called into question.”

Immigration and security issues in the Sahel of Africa were also briefly discussed as well as the prospects of cooperation with India, which both Ministers are expected to visit in the near future.

Mr. Dendias invited Mrs. Truss to Greece; an invitation accepted by the British Minister of Foreign Affairs, saying that she has visited our country many times, but sometimes in the capacity of Minister.

Finally, Liz Truss stated that the United Kingdom and Greece are “united in condemning Putin’s barbaric invasion of Ukraine” while expressing her condolences for the deaths of Greek expatriates in Ukraine.