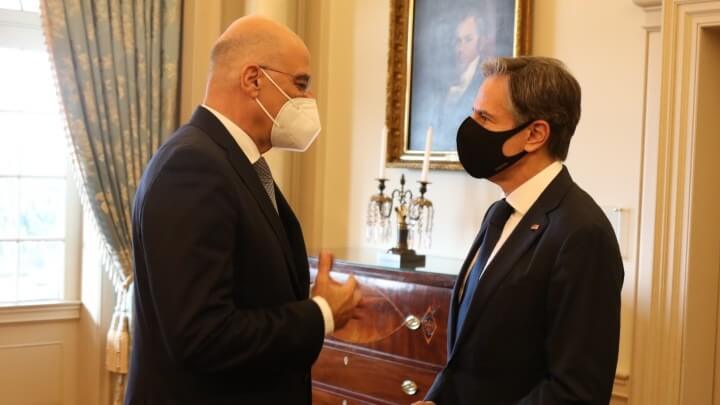 The strategic and stabilizing role that Greece plays across the Balkans to the Eastern Mediterranean is reflected in the Greece-US Mutual Defence Cooperation Agreement (MDCA).

Nikos Dendias and Anthony Blinken arrived at the “Benjamin Franklin” room of the State Department, where they signed the five-year renewal of the agreement during a special ceremony.

Diplomatic sources estimate that the MDCA is a vote of confidence in Greece and the expanded geopolitical role it is called to play, as the US chooses to strengthen its geopolitical and strategic footprint in our country while moving away from Europe and focusing on its strategic interest in the Pacific. Therefore, Greece is one of the few European countries in which the United States invests for the future.

In fact, the agreement has a five-year duration, thus giving a long-term character to the defence relationship between the two countries and allowing the agreement to get rid of the current geopolitical situation and not depend on the US relations with other countries in the region.

Also, diplomatic sources noted that this is the first time that the US does not put Greece and Turkey ‘in the same basket’. Washington does not seem to be intimidated by Turkey’s provocative behavior and does not hesitate to deploy its forces in Greece. The choice of Alexandroupolis is considered a typical example that indicates the American will to bypass the Bosphorus Straits, proving the dynamics of Greek-American relations.

I had the pleasure and honour to sign the Amendment to the Defence Agreement between the Hellenic Republic and the United States. It is an Agreement that safeguards Greek interests; an Agreement that, we believe, establishes a protective shield for our country. (1/2) pic.twitter.com/GB8GxkDkgm

According to diplomatic sources, the sovereignty and territorial integrity of the country is further shielded, both through the text’s explicit reference to it and the presence of the US in key areas such as Evros and Crete.

US Condemnation of Turkish Casus Belli

For the first time in a conventional text concerning our country, the US clarifies that the threat of violence is an unacceptable practice. This report is interpreted by the Greek side as an indirect condemnation of the Turkish Casus Belli.

In this context, the decision to mutually protect the sovereignty and territorial integrity against actions that threaten peace – including armed attacks – is confirmed. In fact, both sides are committed to preventing such actions, but also to opposing them.

Strengthening the US Military Presence in Areas of Crucial Importance

The new agreement strengthens the American footprint in areas of strategic importance to Greece. In addition to the facilities at the Souda naval base, the US Armed Forces will have institutionalized access to the Litochoro firing range, to the Hellenic Army Aviation Brigade in Stefanovikeio, Magnesia, and to Alexandroupolis which is the gate through which deployed US military forces can be based in Eastern Europe.

Not only does this new agreement not rule out the future US presence on the Greek islands except Crete, but it also includes explicit provision for the extension to other facilities. According to diplomatic sources, the American side did not want to commit directly to other regions at least for the time being.

In addition, the extension of the agreement now paves the way for funds to be disbursed by the US Congress, laying the groundwork for US investment in defence facilities and military infrastructure projects. The agreement allows Greece to use these modernized facilities, and therefore, this will be to the benefit of the Greek Armed Forces.

Finally, the agreement has a five-year duration and provides for a grace period of two years in the event that one of the two parties decides to terminate it.

For the Greek side, the agreements with Washington and Paris complement each other and are not competitive, as they demonstrate Greece’s efforts for European and Euro-Atlantic security. Finally, Mr. Dendias clarified that this agreement, as well as the previous agreement with France and the agreements with the UAE, create a shield of protection for Greece which is not directed against anyone. On the contrary, it creates an axis of stability and improvement of the quality of life of the societies of the region.

With information from: AMNA, defenceredefined.com.cy