Libya | Recapture of territories, the BUK systems and ceasefire – Interactive map
Defence Redefined
Published on 02/06/2020 at 14:12 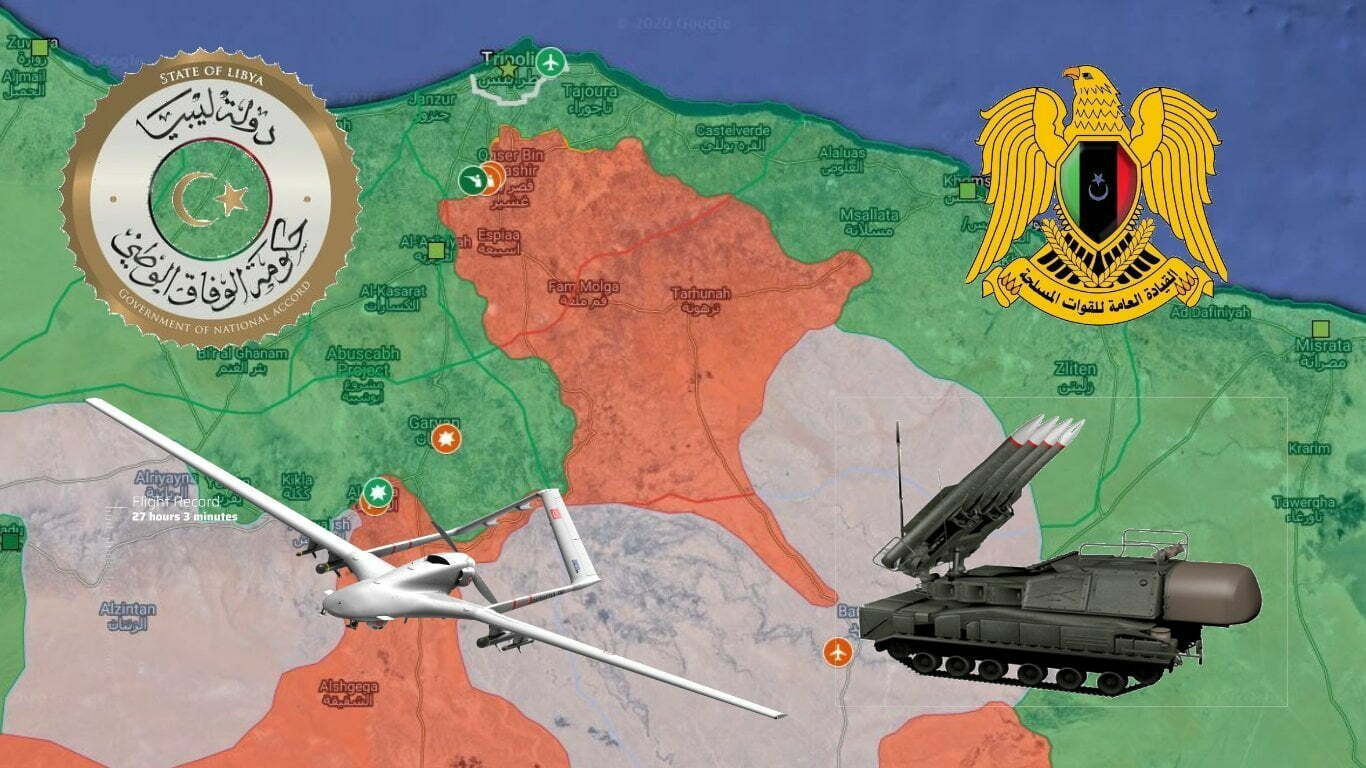 The forces of General Khalifa Haftar (LNA), which have suffered many defeats in recent weeks, announced on Monday 01/06 that they have recaptured the Al Assaba community in southeastern Tripoli.

Navigate to the interactive map by clicking on the icons for more information.

This area has so far been under the control of the forces of the internationally recognized Government of National Accord (GNA).

“Units of the armed forces have regained control of the Al Assaba zone this morning after a series of airstrikes,” Ahmed al-Mismari, a spokesman of Haftar, the powerful man in eastern Libya, posted on Facebook (see map).

According to the Cyprus News Agency (CNA), images and videos showing the entry of Haftar’s forces into the city, which is 120 kilometers away from Tripoli, where the headquarters of the GNA are located, were shown on social networking sites and on local television networks.

Without clearly admitting that the GNA lost this community, the spokesman of the forces supporting the national unity government spoke of “proliferation” of airstrikes in Al Assaba region.

“The air force targeted three vehicles, a military Tiger-type armored vehicle of the United Arab Emirates, one with a machine gun and a truck loaded with ammunition,” said Mohammad Gnunu.

Al Assaba was controlled by forces of LNA until recently, when it was occupied by forces of the GNA. After the recapture of the city, the Libyan National Army (LNA), led by Khalifa Haftar, launched a bombing raid in the city of Garian, north of Al Assaba (see map).

With the latest developments, there are three open fronts in Libya. Specifically, there is one in the capital Tripoli where forces of the LNA strongly defend the Tripoli International Airport, one in southern Tripolitania Province, where the forces of LNA started new operations to recapture areas which were lost in the previous days and one west of Tripoli, in the city of Syrte, where reference is made on social media regarding the encampment of Russian mercenaries at a local airbase (see map).

#Libya #ليبيا
According to sources, #Russia-n military forces took control of the military bases in the city of #Sirte and the important airbbase of Ghardabiya. This could lead to a fundamental change in the course of the battles in Libya. pic.twitter.com/kEBapHOP4W

In addition, social media is reporting on anti-aircraft systems parked at the Al Jufra airbase in the Jufra District of Libya to protect against possible Turkish F-16 airstrikes against Haftar’s forces. In particular, according to analyst Babak Taghvaee – Bapak Takwaie, the LNA has developed on this basis BUK M1 or M2 air defence systems as well as several Pantsir S1E systems (see map).

In another development, international media reported that General Khalifa Haftar had agreed to a ceasefire and talks with the Government of National Accord (GNA).

UNSMIL welcomes the acceptance by GNA and LNA of the resumption of talks on the ceasefire and associated security arrangements based on the draft agreement submitted by UNSMIL to the parties during the Joint Military Commission talks (5+5) on 23 Feb.https://t.co/23VsiSpXk9 pic.twitter.com/Ls31VhNAQW