In recent years, the gradual development of Lethal Autonomous Weapon Systems (LAWSs) in the theater of operations has increased dramatically.

LAWSs are considered autonomous weapon systems not only capable of scanning an area of ​​interest, detecting and identifying hostile targets, but also deciding independently – or not – to lock in on the threat and attack it for a quick, lethal closure. These capabilities are products of, among other things, advanced algorithms developed and enhanced by artificial intelligence (AI) technologies.

Israel Aerospace Industries’ (IAI) Mini-Harpy multi-purpose tactical munition belongs to this category and the purpose of this article is to present its main features and technical characteristics.

The Mini-Harpy combines the capabilities of two IAI loitering munitions, the Harop and the Harpy, and is designed to provide unrelentingly up-to-date situational awareness and close the attack circle at a low cost.

Further, it seeks to neutralize radiation-emitting threats, such as radars, and to suppress/destroy enemy air defence systems (SEAD / DEAD missions) by launching attacks from shallow to vertical angles. Furthermore, the mini-Harpy can be used for attacks against armored and non-armored vehicles as well as against personnel.

Fire and Forget as well as Human-in-the-Loop function

The Mini-Harpy can be classified as either “Fire-and-forget” or “Launch-and-leave” munition, definitions that refer to munitions that do not require further human intervention as soon as they are launched. In other words, in such cases, the enemy target does not need to be “identified” by a laser or “colored” by aircraft radar.

Specifically, intelligence about target engagement is entered into the munition shortly before the launch phase. The intelligence can come from coordinate systems and radar estimates to an image of the target point. In this sense, it can be said that the Mini-Harpy is a reactive system that seeks “if-then situations”, where the system reacts according to a given sensory input.

However, the Mini-Harpy can operate in Human-in-the-Loop mode as an option, where the munition can engage targets and attack only on human command. In practice, the system is designed to allow operators to control until the last minute, thus providing options for canceling and / or repeating the mission. In any case, according to the manufacturer, this weapon system has as its principle of operation the engagement of targets, making collateral losses and losses of friendly forces unlikely.

Perhaps the most important features of this weapon system are its reduced radar signature, its silent due-to-electrical-propulsion operation, and its ability to barrage massively at enemy targets makes it particularly deadly in saturation attacks, as evidenced by the recent Nagorno-Karabakh conflict, in which Azerbaijan used unmanned aircraft and loitering munitions, including the Harop as you can see in the video below.

The modern field of operations in Greece and Cyprus

The acquisition of loitering munitions by the Hellenic armed forces and/or of the National Guard of the Republic of Cyprus should be considered tacit at some point in the future since the systems at issue combined with other weapon systems such as Unmanned Aerial Vehicles (UAVs) have radically and irreversibly changed modern warfare.

** The views and/or comments expressed in the articles belong to each author and may not constitute an opinion and/or position and/or be adopted as is by the company and/or the site administrators. More in the terms of use of the website. 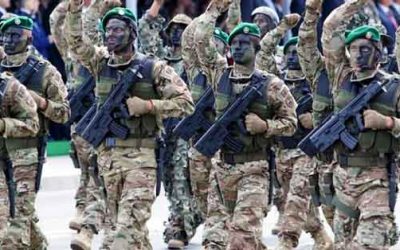