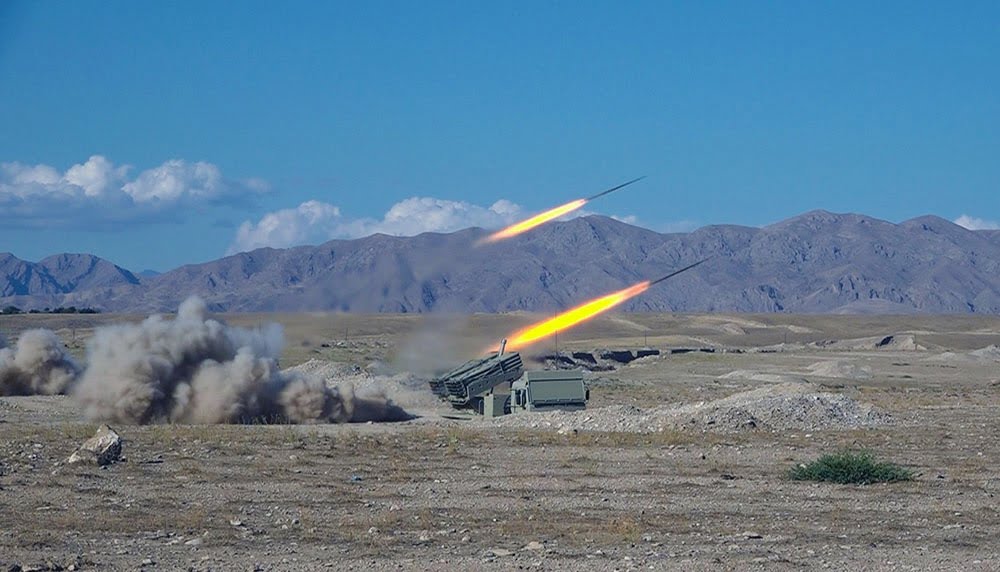 For the 6th day the planet is watching the war in the disputed area of ​​Nagorno-Karabakh between Armenia and Azerbaijan. The severity of the attacks is unprecedented (compared to previous conflicts of lesser intensity between the warring parties) and although the respective Ministries of Defence do not give “real” numbers of casualties and material losses, the numbers are still very large.

The battles that are taking place in the Nagorno-Karabakh region are being fought on the Armenian side, mainly with the defence of infantry units, armored forces, air defence systems and artillery. On the Azerbaijani side, we observe the use of artillery and extensive use of unmanned aerial vehicles (armed and unarmed) as well as loitering ammunition, of Turkish and Israeli construction, which are power multipliers and have made the difference in combat so far.

From the earliest days of the war, Turkish Bayraktar TB2 UCAV and loitering ammunition (some referred to in simplistic terminology as suicide drones or kamikazes) destroyed a large number of (obsolete) OSA and Strela-10 anti-aircraft systems of Russian origin. According to various sources, Azerbaijan has a squadron of drones consisting of Aerostar (similar to those purchased by the National Guard), SkyStriker, Orbiter 1K (which is converted into a kamikaze drone with an explosive charge of 3kg, Orbiter, Harop (another kamikaze drone), Heron TP, Hermes 450 and Hermes 900. 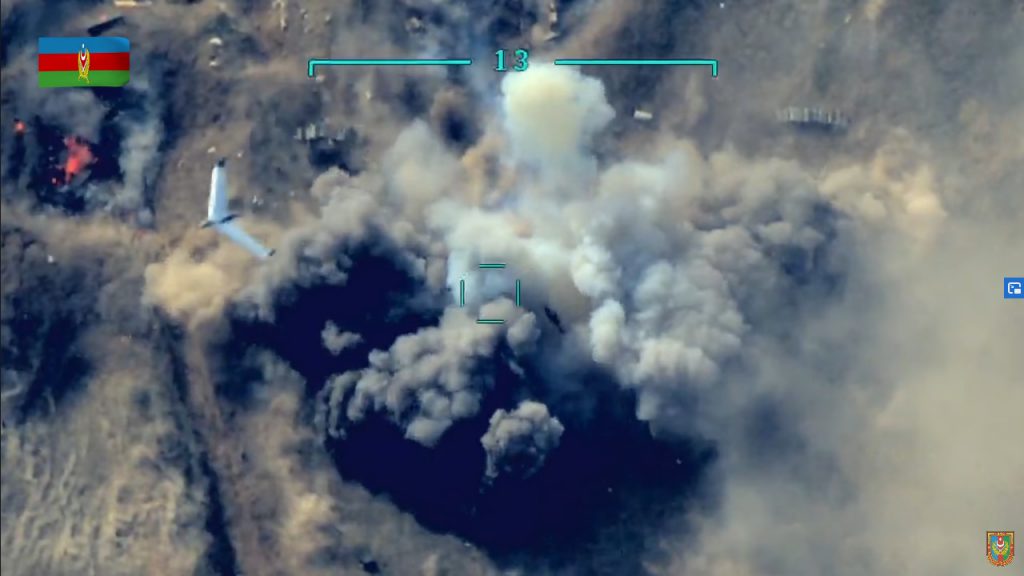 Orbiter 1K flying over a target propab;y being hit by another UAV or Loitering Munition Platform

In recent days, according to a video released by the Ministry of Defence of Azerbaijan, these UCAVs and “kamikaze” drones have been mercilessly hitting both military equipment and personnel causing heavy losses to the Armenian ranks.

Footage from Armenian soldiers shows the moment an Azerbaijani IAI Harop loitering munition (suicide drone) targeted what is claimed to be a troop transport bus in Vardenis, Armenia. pic.twitter.com/OzTgF5bHyg

In response to the widespread use of UAVs by Azerbaijan, there is information that Armenia has used decoy equipment, such as anti-aircraft systems to mislead Azeri unmanned aerial vehicles. This tactic was successfully applied by the Serbian army, misleading NATO force pilots using wooden decoys during the 1999 bombings. 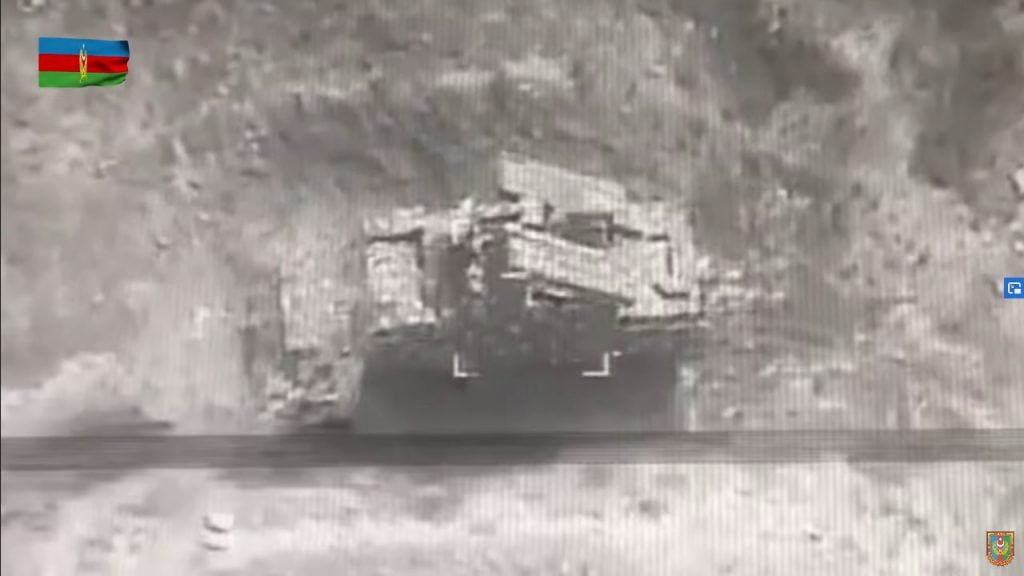 On its part, Azerbaijan seems to have converted the old AN-2 jets into drones, which it also uses as “bait” to the anti-aircraft forces of Armenia in order to reveal their positions and their subsequent engagement by the loitering ammunition. 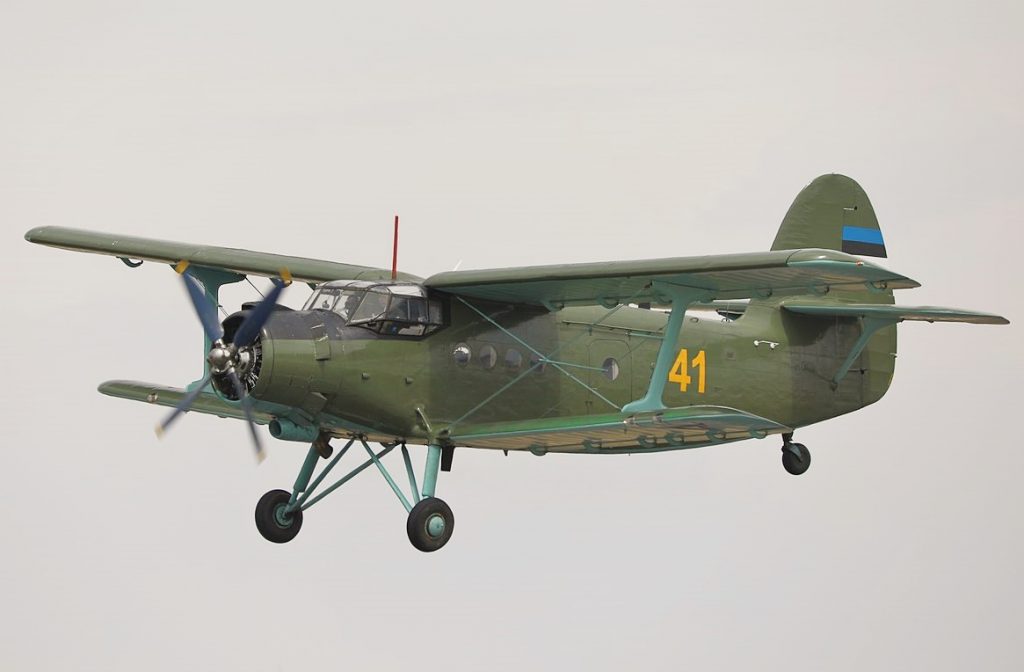 In another development, yesterday, October 1, the Prime Minister of Armenia, Nikol Pashinyan, stated that the S-300 air defence systems fired missiles in the area of ​​Yerevan, the capital of Armenia. In the area of ​​Kotayk and Gegharkunik, the capital’s air defence shot down the 4 unmanned aerial vehicles that invaded the airspace of Armenia. It is noted that this is the first military use of the S-300 system in full-scale conflict.

Despite heavy losses to Armenian forces, the Azerbaijani army has not made significant progress on the ground. At the same time, hostilities can be described as intense with the use of almost all available weapons. 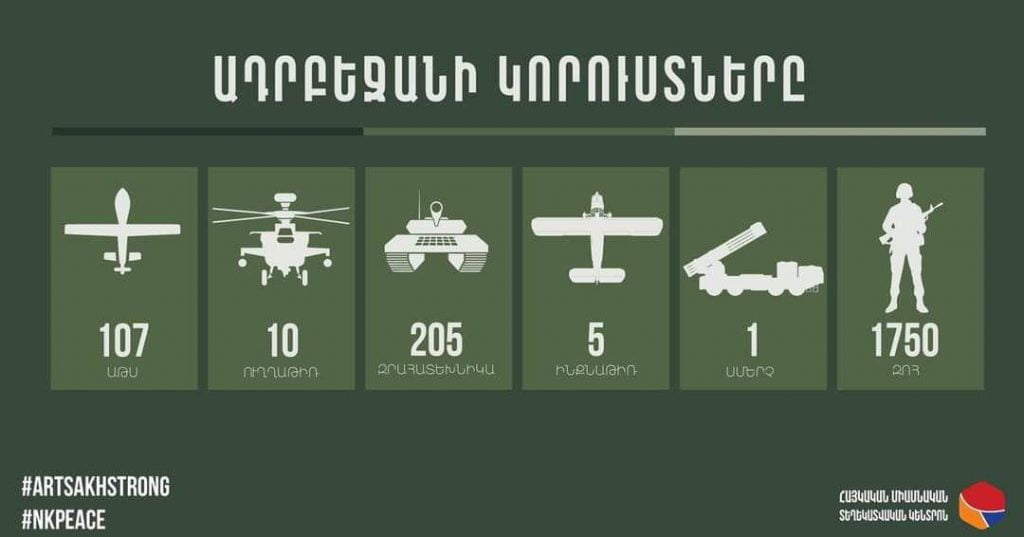 The losses of Azerbaijan, according to the Ministry of Defence of Armenia 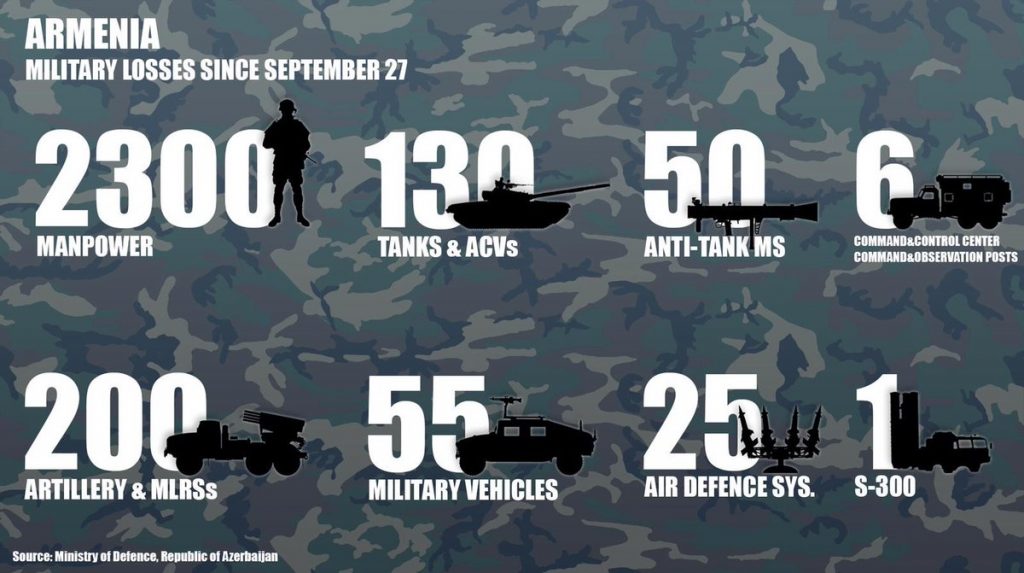 Regarding the political events, today the Ministry of Defence of Armenia issued a statement stating that: “Armenia remains committed to the peaceful settlement of the Nagorno-Karabakh conflict. While the aggression against Nagorno-Karabakh will continue to receive our strong and decisive response, we are ready to work with the countries of the OSCE Minsk Group to restore ceasefire based on the 1994-1995 agreements.”

Stay tuned to DEFENCE ReDEFiNED for ongoing updates as well as for more analyses-conclusions that emerge from the examination of the conflicts in question.