June 5, 1967 | The Six-Day War – The Destruction of the Arab League and Israel’s Triumph 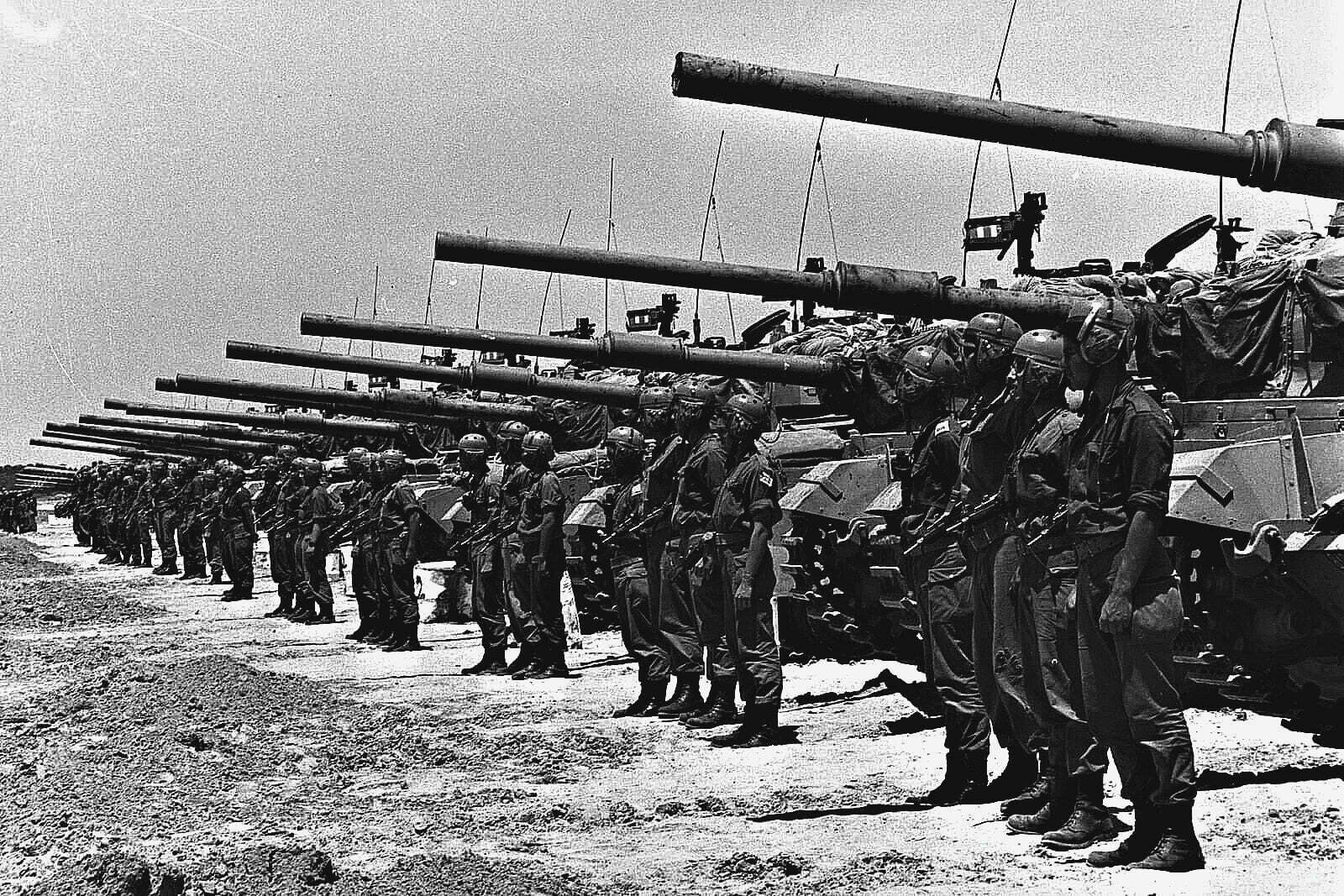 The “Arab-Israeli War of 1967”, also known as the “Six-Day War”, broke out between Israel and Egypt, Jordan and Syria. Iraq, Saudi Arabia, Kuwait and Algeria had contributed to the Arab League with men and weapons.

Historians and analysts of the time give different interpretations to the events that preceded and provoked this large-scale war. The official narration of the events begins in May 1967, when Egypt expelled the UN forces (UNEF) from the Sinai Peninsula, which had been parked there since 1957 as a result of Israel’s invasion in Sinai in 1956. Subsequently, Egyptian President Gamal Abdel Nasser gathered 1,000 armored vehicles and 100,000 troops on the border with Israel, he forbade entrance to the straits of Tiran to all ships carrying the Israeli flag or strategically important materials and gave a united Arab response to Israel.

Israel, seeing the developments, attacked first. On June 5, 1967, a series of airstrikes were launched against the Egyptian Air Force, marking the beginning of the “Six-Day War”.

On the first day of the conflict, the Israeli airstrike destroyed about 90% of the Egyptian Air Force. Egypt had by far the largest and most modern air force of all the Arab forces, which consisted of 450 warplanes, all Soviet, and a large proportion of the top, for the time, MiG-21. 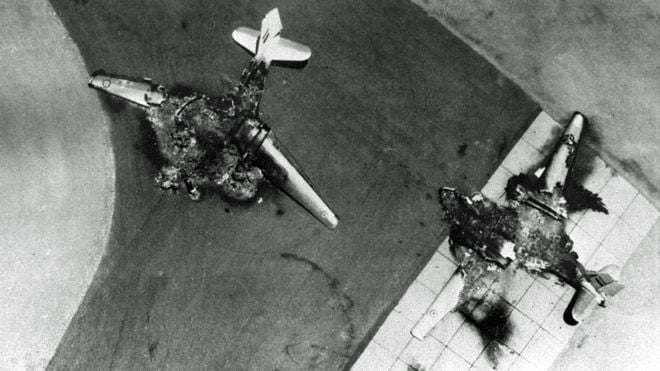 The Israeli air force had the French Mirage III and Mystère IV, which were armed with guided missiles. During the air strike, the Israeli pilots, marking a wide circle at low altitude above the Mediterranean, attacked, without their formation being noticed by the Egyptian radar. Their planes flew close to each other, confusing the radars in terms of their actual number.

The attack on the first day of the war was a complete success for the Israelis. As long as the Egyptian planes were not damaged by the attack, they could not take off and thus became targets for the next waves of the Israeli attack. Since the first wave of attacks, 16 Egyptian bases, from the Suez Canal to Cairo and from Luxor to the Red Sea, had been out of action, while nine others had been destroyed in the rest of the Arab League.

More than 300 Egyptian planes were destroyed and 100 Egyptian pilots were killed. Among the missing Egyptian planes were the 30 Tupolev Tu-16 bombers, as well as 27 of the 40 Ilyushin Il-28 bombers, 12 Su-7 fighter-bombers, more than 90 MiG-21s, 20 MiG-19s, 25 MiG-17s and around 32 transport planes and helicopters. The Israelis lost 19 planes, mostly due to operational losses. 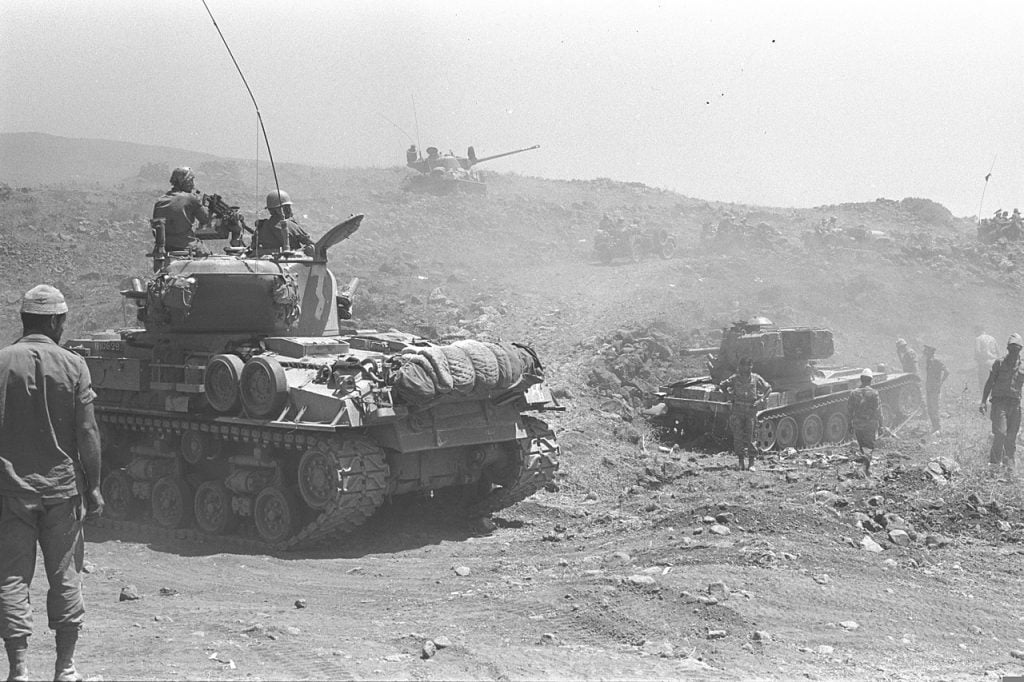 Israeli tanks in the Golan Heights

The Israeli Air Force also eliminated the Syrian Air Force, thus gaining the upper hand in the air. In the afternoon of June 5, the Israeli air planes, having finished with Egypt, destroyed two thirds of the Syrian Air Force, and forced the remaining one third to retreat to distant bases, without being able to play a greater role in the ongoing war.

Israel’s air superiority allowed it to achieve equally important victories on the ground. Within 24 hours, at the Golan Heights in Syria, the Israeli army arrived very close to the capital of Syria, Damascus.

Within three days, Israel had control of the Gaza Strip and the entire Sinai Peninsula as far as the East Bank of the Suez Canal. Also, on the first day of the war, King Hussein of Jordan began bombing Israeli forts. In a counterattack, Israel forced the Jordanian army to withdraw from East Jerusalem and most of the West Bank. On June 7, Israeli forces triumphantly entered East Jerusalem after 1900 years.

During the “Six-Day War”, the Israeli Defence Forces destroyed and occupied hundreds of enemy Soviet tanks, planes and weapons from Arab countries. 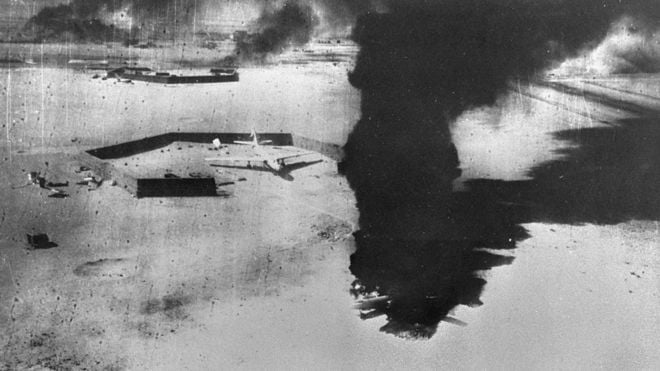 Egypt had to rebuild its army with the help of the Soviet Union. The “Six-Day War” actually lasted 132 hours and 30 minutes. Israel had mobilized 264,000 men, including reservists. Egypt had 150,000 men, Jordan 55,000 and Syria 75,000. The casualties for the Israelis were 679 dead and 2,563 wounded, while the Arabs had about 21,000 dead and 45,000 wounded, although the numbers on each side vary. Lebanon, despite being a member of the Arab League, did not get involved in the war, except when it attacked Israel with two Hawker Hunter aircraft, one of which was destroyed by Israeli aircraft.

The Six-Day War was attended by soldiers who excelled in the later political developments in the Middle East. The head of Israel’s General Staff was Yitzhak Rabin, later prime minister. The Israeli attack on Sinai was led by Ariel Sharon, who was also elected Prime Minister of Israel. Syrian forces were led by Hafez al-Assad, the president of Syria until his death in 2000, and the father of the current president of Syria, Bashar al-Assad.