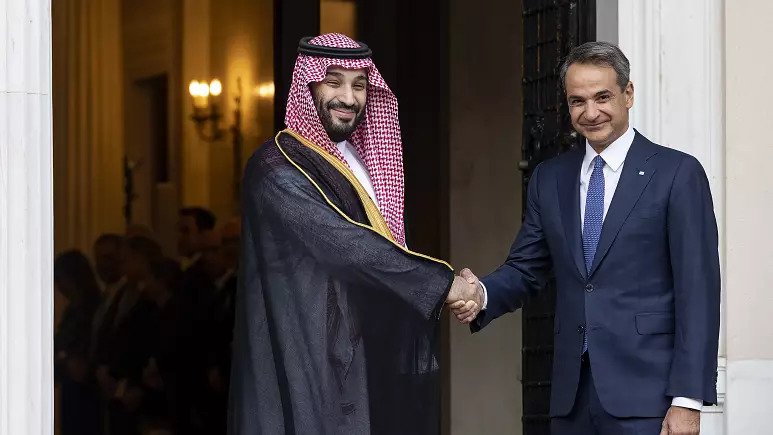 In the presence of Prime Minister, Kyriakos Mitsotakis, and the Crown Prince of Saudi Arabia, Mohammed bin Salman, Nikos Dendias signed a memorandum of understanding on the Formation of a Strategic Partnership with his Saudi counterpart, Faisal bin Farhan.

Government sources state that the said meeting took place in a warm atmosphere, indicative of the strong interest of both sides in further deepening the already close bilateral relations and expanding the dynamically developing Greek-Saudi cooperation, which was also confirmed during Kyriakos Mitsotakis’ visit to Riyadh in October 2021.

In this context, with the signing of a relevant agreement, the establishment of the Supreme Strategic Cooperation Council (SSC) of the two countries was officially instituted, which consolidates the strategic relationship of the two countries and the systematic promotion of bilateral cooperation in all areas of mutual interest.

The Prime Minister underlined the importance of the East to Med data Corridor (ECM) project, the underwater and land data transmission cable system that will connect Europe with Asia via Greece and Saudi Arabia and make Greece a data entry gateway to the EU, simultaneously connecting it to the Middle East and Asia.

He also had the opportunity to present to the Crown Prince of Saudi Arabia the initiatives that our country has undertaken to become an energy hub that connects the wider region with European markets.

In this context, the two leaders discussed the prospects of cooperation between the two countries in the field of “green energy” as well as the possibilities of transferring electricity from Saudi Arabia to Europe through our country, which can become the “bridge” between the Middle East and Europe.

Kyriakos Mitsotakis pointed out the new investment opportunities that Greece offers in tourism infrastructure, the real estate market, maritime transport, and the logistics sector, while he emphasized the significant investment potential in port infrastructure and the land transport network in Alexandroupolis.

The two leaders also focused their attention on the new prospects opening up for cooperation in digital connectivity, with the transformation of the two countries into important regional data centers owing to their geographical location.

The same sources report that Kyriakos Mitsotakis and Mohammed bin Salman also discussed international and regional developments. The Prime Minister noted that Saudi Arabia is a stable partner with a particularly important role in the Gulf region and beyond.

The Prime Minister’s private meeting with the Crown Prince of Saudi Arabia was followed by extensive talks between the two delegations.

The delegations’ meeting was followed by the signing and exchange of agreements between the two sides in the following areas: establishment of a Supreme Council for Strategic Cooperation, energy, military cooperation, bilateral investments, scientific and technological cooperation, health, crime combating, culture and sports, technical cooperation in the fields of standardization and quality, cooperation in archiving and file management.

In addition, in the presence of the Prime Minister and the Crown Prince of Saudi Arabia, the representatives of Mena Hub (STC), TTSA, Public Power Corporation (PPC) and CYTA signed the agreement on the construction of the East to Med data Corridor (EMC) underwater cable.