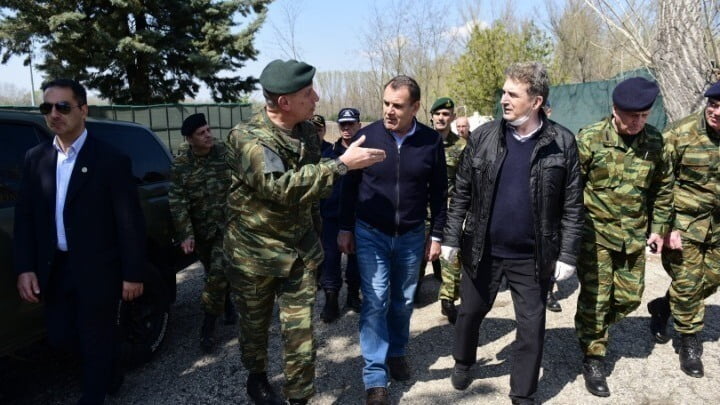 The Ministers of National Defence, Nikolaos Panagiotopoulos, and Civil Protection, Michalis Chrysochoidis, visited today units and outposts in the area of ​​responsibility of the 4th Army Corps. The Ministers were accompanied by the Chief of the Hellenic National Defence General Staff, General Konstantinos Floros, and the Chief of the Greek People’s Liberation Army (ELAS), Lieutenant General Michael Karamalakis. The aforementioned visited military outposts in the area, the border bridge “Kipon”, the ELAS Coordination Center in Orestiada and the base of the 12th Mechanized Infantry Division.

One year after Turkey’s mass channeling of immigrants to Greece on the border of Evros, where the government decided to build a protective fence, the project is expected to be completed by the end of the month. The project in the area of ​​Feres consists of a strong metal railing 5 meters high and 27 km long. Its potential extension and the construction of additional parts of the fence – with the contribution of EU funds – are currently being considered. The latter concerns the areas between Didimoticho and Soufli as well as the Orestiada Triangle (Dilofos, Marasia, Ormenio).

The projects taking place along the border in order to upgrade the level of security include the construction of new roads for monitoring the area and the maintenance of barriers along the river. The technological equipment that will include drones, thermal cameras and the Roborter system for border detection and monitoring is also expected to be completed.

The Roborter system collects heterogeneous data from various sources such as thermal cameras, aerial, ground and amphibious surveillance equipment, sensors and robots to provide monitoring authorities with a clear picture of the situation and the border security. It can be used for guarding land and sea borders, but also for detecting environmental pollution.

Regarding Greece, in addition to its use in Evros, the system is already being trialled in the protection of maritime borders in the Kos – Karpathos complex, where three trials of the system have already been completed.