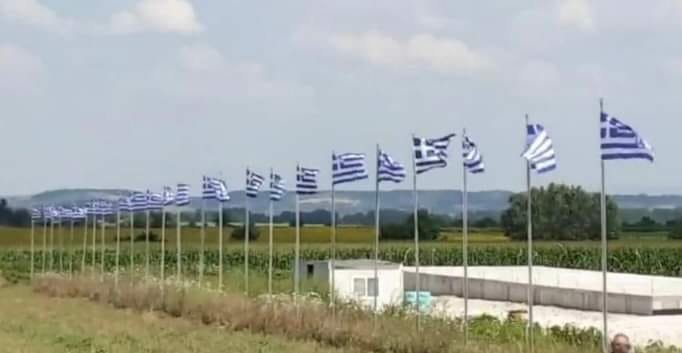 Thirty Greek flags are fluttering on poles near the Greek-Turkish border. This is a move by Greek expatriates, who offered the flags to the residents of Evros and then raised them in Evros.

Specifically, 30 Greek flags were placed and have been fluttering since the day before yesterday at the Evros Police Station, sending a message of deterrence to any neighbor’s plans regarding the exploitation of immigration.

Thirty flags, as many as the 29 villages and 1 city of the municipality of Orestiada, which, according to information from GRTimes, were offered by Greek expatriates from Germany.

The installation of poles kicked off a few days ago, led by the President of the Fylakio Community, Mr. Christos Tyrbakis. The flags in question were placed right next to the new structure, which is under construction.

At the same time, the construction of the small church in the Fylakio Reception and Identification Center opposite the structure is underway. In fact, a resident of the village decided to donate his plot to the Church in order to build the particular church, while he had asked for the church to be named “Agia Sophia”.

“These flags demarcate the area where the church of Agia Sophia will be erected. Each flag also belongs to a local community and we even included a village that has now been deserted.

The demographic problem is huge in the region. We remind you that this is Greek territory and it shall remain so,” said the President of the Community, Mr. Christos Tyrbakis, to GRTimes.