INTERNATIONAL RELATIONS
Erdogan | Warnings to Sweden and Finland over commitment fulfillment
Defence Redefined
Published on 01/07/2022 at 12:30 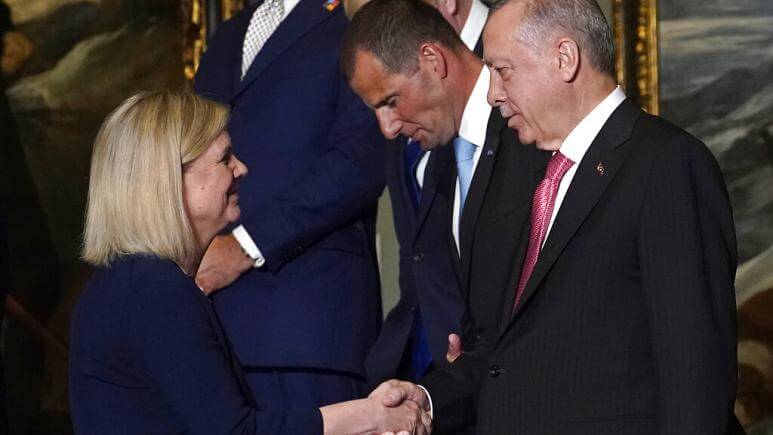 Turkish President, Recep Tayyip Erdogan, threatened again on Thursday to block Sweden and Finland from joining NATO only 48 hours after the signing of the agreement between the three countries.

Addressing the press towards the end of the summit of the North Atlantic alliance in Madrid, he demanded that the two Nordic countries “play their role in the fight against terrorism,” otherwise he will not ratify the agreement signed on Tuesday night.

“If they fulfill their duties, we will submit (the agreement) to the parliament of Turkey for approval. If they don’t, we will not do so,” he explained.

Since mid-May, Ankara has blocked the process of NATO enlargement and the inclusion of the two northern European states in the military alliance, accusing them of protecting Kurdish fighters from the Kurdistan Workers’ Party (PKK) and the People’s Protection Units (YPG), which it describes as “terrorist”.

However, on Tuesday night the three governments signed an agreement that theoretically paves the way for Sweden and Finland’s NATO membership, something they decided to seek after Russia invaded Ukraine, abandoning their decades-long neutrality status.

A senior Turkish diplomat in Washington said the adoption process could begin as early as September and could last until 2023. The summer recess in the Turkish Parliament began on July 1.

Mr. Erdogan referred to “Sweden’s promise” to extradite “73 terrorists”. “They will send them, they promised. It is mentioned in the documents. They will keep their promise,” he added without elaborating.

Stockholm hit back on Thursday night, reminding that decisions on extradition issues are made by the judiciary, which is independent. “In Sweden, the law is enforced by independent courts,” Justice Minister, Morgan Johansson, said in a written statement to AFP.

“Persons who do not have Swedish citizenship may be extradited at the request of other countries, but only if this complies with Swedish law and the European Convention on Extradition,” he insisted.

Recep Tayyip Erdogan did not provide details about these 73 persons. Ankara has been demanding for several years the extradition of Kurds, members of armed organizations, or people associated with the Fethullah Gülen movement exiled to Sweden.

The Turkish head of state also called on Helsinki and Stockholm to finalize their laws regarding the presence on their territory of members of the PKK and YPG, organizations that operate on Turkey’s borders with Iraq and Syria.

In the corridors of the summit, a European diplomatic source spoke bluntly about “blackmail” by the Turkish President.

The agreement signed on Tuesday stipulates that Turkey will lift its objections to the two states’ accession to NATO in exchange for their cooperation concerning members of the Kurdish organizations it targets.

The very next day, Ankara demanded what it considers due, namely Sweden and Finland to proceed with the extradition of “terrorists”.

They are members of either the PKK, an organization described as “terrorist” by Ankara and its Western allies, or the movement of preacher Fethullah Gulen, whom Mr. Erdogan accuses of masterminding the attempted military coup in Turkey in July 2016.

The demand was received coldly in both Helsinki and Stockholm. “For all these cases there have already been decisions in Finland,” commented Finnish President Sauli Niiniste, while Finland’s Ministry of Justice clarified for its part that it has not received any new extradition requests from Turkey in recent days.

For her part, Swedish Prime Minister, Magdalena Andersson, promised closer cooperation with Turkey regarding the lists of PKK (fighters). “But we will continue to abide by Swedish law and international law,” Ms. Andersson added in an Instagram post.