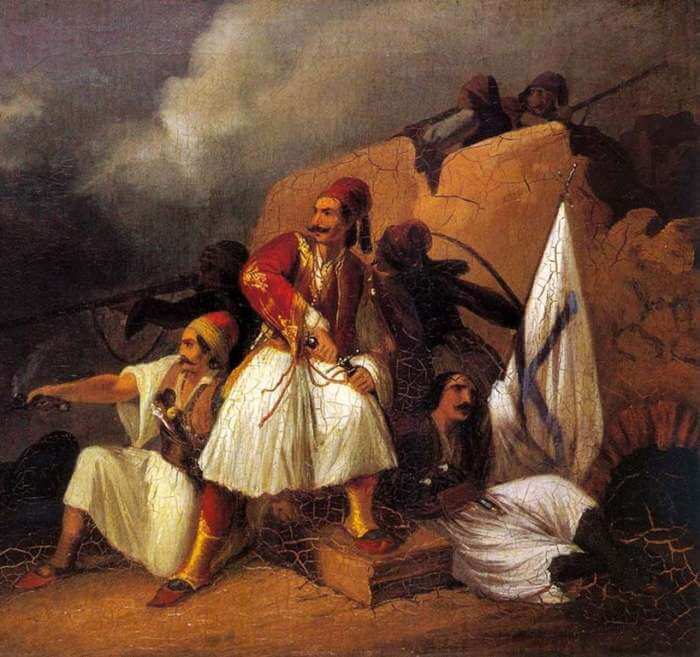 The general perception regarding the spiritual preparation and dissemination of revolutionary ideas in the 19th century Greek world links the effect brought by the classic “European Enlightenment” via the Greek intellectuals of the time with the emerging political class of the Greek revolutionaries.

The consensus, as is formed in “school history”, presents the Greek Revolution almost directly deriving from the realization of the secular, anthropocentric and rational political conceptions of the “Enlightenment” in a revolutionary act and connects the revolution in France in July 1789 with the national revolution of the Greeks.

Although the revolutionary regime in France quickly disintegrated and collapsed, returning to absolutism, the prevailing historiography continues to link the later revolutionary venture of the Greeks with the “extrapolation of the the French Revolution ideals”, and therefore implies that there was an obvious and direct link with the strategic assessments of the Greeks.

The established view rather underestimates two important pre-revolutionary facts: the rich history of the Greek armed uprisings before 1821 and the fact that the liberal “revolutionary chain” – that led to the establishment of the nation-state in Europe – had rather the successful American Revolution against British colonial rule (American War of Independence, 1765-1783) as its starting point.

The rich history of the Greek armed uprisings before 1821 is perhaps the most important and all-time pre-revolutionary fact. After all, long before 1821, the revolutionary act of the Greeks had already been extensive, with dozens of mass, organized and non-organized uprisings throughout Greece. The spread of revolutionary movements in post-American Independence Europe, the United Irishmen uprising (1798) against British rule in Ireland, and the outbreak of the Serbo-Ottoman Conflict (1804–1835) laid the foundation for an emerging national-popular consensus as the only functional framework for proposing political and social claims.

Indeed, in America the first successful establishment of an independent state (republic) takes place, based on the national constitution and the institutional establishment of liberal democratic elements of government, such as the election of government “by the people, for the people”, the guarantee of property rights, the freedom of speech, press and religious beliefs.

The subsequent world-historical overthrow of the “By the Grace of God” dynasty of the Bourbons in France in 1789, which quickly malformed, failed to transform the anthropocentric and emancipatory elements into government (La Terreur – Terror Regime), leading to fruitless wars with neighbouring kingdoms and to Napoleon Bonaparte’s military absolutism (Empereur des Français), which of course resulted in the “restoration” of monarchy (!), albeit temporarily.

Also read: “Greek Revolution”: The Geostrategy of the Great Powers

Judging by its outcome (1815), the French Revolution probably ceased to be an encouraging influence. In contrast to the political success and duration of the American Independence (1773), the French Revolution, with the ensuing regime violence and the subsequent restoration of monarchy should probably be a counter-example to the Greek revolutionaries. The American National Independence launches a nation-liberation trend, which is probably related more meaningfully to the Greek one. Undoubtedly, it is difficult to determine the exact impact of the American Revolution on the Greek Issue, as it was probably very limited, however, from a strategic point of view, it is an exaggeration to attribute the “revolutionary impulse” of the Greeks to the indomitable “Enlightenment” dynamics of the French Revolution.

Despite the influence of its messages on the Greek intelligentsia, the French Revolution, as a political process and regime, did not contain the basic constituent elements of the Greek reality (self-determination – ethnicity – religion). Firstly, the Greek Revolution unfolded as an assertion of individual and collective national self-determination, freedom of representation (which culminated in the Revolution of September 3, 1843), the abolition of institutional discrimination based on religion and generally the nation’s dignity in defining its fate as an equal and sovereign entity according to its culture, needs and traditions.

Secondly, the Greek Revolution, unlike the French, in spite of disagreements and conflicts, was not fundamentally anti-clerical, although it was certainly anti-absolutist. Moreover, the unequal institutional relationship (one of subordination) between Islam and Christianity in the Ottoman Empire gave a strong religious dimension to the revolution, although at the same time, the compromising spirit of the higher ecclesiastical priesthood was confronted with the dynamic influence of the bourgeoisie, the sailors and Greeks abroad and was realized owing to the pure freedom and courage of the “Pirates and Klepths”.

Thirdly, the cultural, religious and linguistic affinity, or even practical political consensus for the establishment of a nation-state, was the basis of the political objective. The Greek Revolution was not the result of a systematic political education of society on the ideals of the French “Enlightenment” worldview, that is, humanism, rationalism and secularism. In general, the circles of Greek intellectuals were limited and operated mainly outside the Ottoman territory or were part of the educated clergy. The awakening sermons of “Greek Enlightenment” were difficult not only to reach but also to be understood by the cattle breeders, farmers, sailors, fishermen, merchants, craftsmen and klephts of the Ottoman Empire.

While they empirically understood (experienced) the historical state of subjugation, they did not, however, have the ability to conceive of an alternative reality, to grasp the organized political vision and plan that would free them from the fate of collective subjugation. The risky mediation of “Filiki Eteria” bridged the gap between the long-suffering people and the small, yet emerging, number of Greek bureaucrats, merchants, sailors and students. Without “Filiki Eteria” the vision of liberation would remain trapped in the papers, visions and discussions of Trieste, Vienna, Iasi and Paris. The ambition of the Greeks abroad fertilized the revolution and constituted the necessary link between the “enlightened intelligentsia” and the actual revolutionary act.