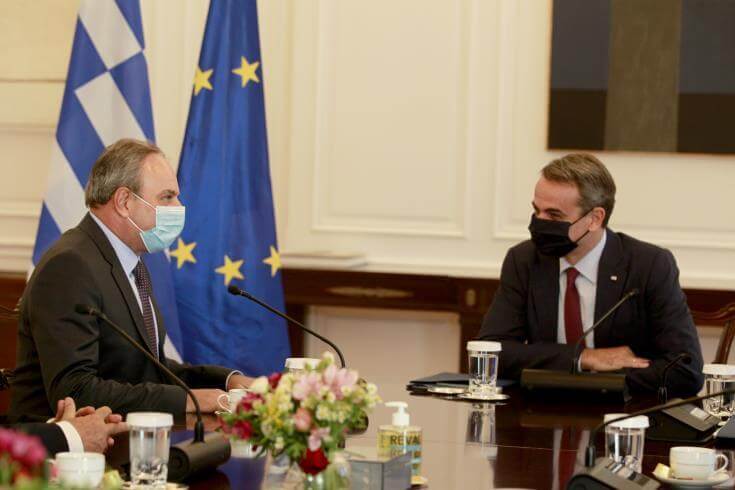 The commitment of Greece to the decisions of the UN Security Council as the only acceptable context of negotiation to resolve the Cyprus issue was highlighted by the Greek Prime Minister, Kyriakos Mitsotakis, during the meeting with the Secretary-General of AKEL, Stefanos Stefanou, who is visiting Athens for a series of contacts.

The Greek Prime Minister congratulated Mr. Stefanou on his recent election to the leadership of AKEL and assured him of Greece’s continuous support to a solution to the Cyprus problem.

He further added that the necessary conditions for the solution of the Cyprus problem are the abolition of the anachronistic system of guarantees as well as the withdrawal of the occupying Turkish troops from the island.

During the discussion, Mr. Mitsotakis and Mr. Stefanou also discussed the issue of Turkish provocation, with emphasis on the illegal actions in Varosia, emphasizing that they are in complete contradiction with the Security Council resolutions and the positions of the international community, thus making it particularly difficult to resume negotiations on the Cyprus issue.

From the side of the Greek Government, the meeting was also attended by the Director of the Diplomatic Office of the Prime Minister, Ambassador Eleni Sourani, and the Deputy Government Spokesperson, Aristotle Peloni.