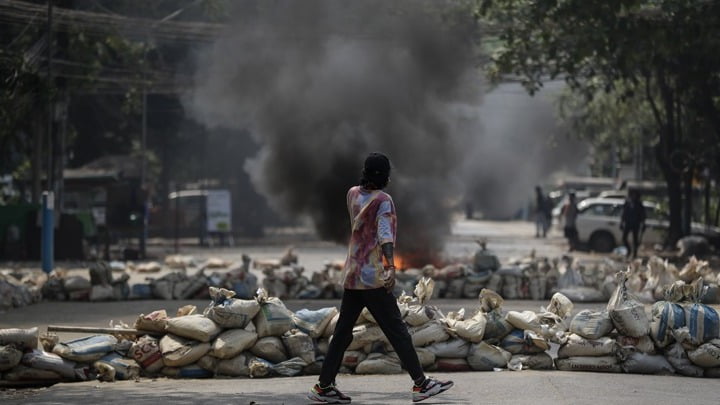 Saturday was the deadliest day since the February 1 coup in Myanmar, since at least 107 people were killed, including seven children. This event sparked outrage in the European Union and the President of the United States, who unequivocally condemned the junta violence.

“It’s horrible,” Joe Biden told reporters yesterday. “It is absolutely outrageous and, according to the information I received, many people have been killed for no reason.”

Last night, the European Union, through its Foreign Minister, condemned the “unacceptable escalation of violence”, the “absurd path” taken by the military junta in Myanmar. In a statement, EU High Representative Giuseppe Borrell described Saturday as a “day of horror and shame”.

Demonstrators demanding the restoration of democracy had called for new mass mobilizations on Saturday, the day when the armed forces celebrations usually take place before their leader – and now the leader of the military junta – General Min Aung Hlaing.

On Saturday night, Min Aung Hlaing and his wife hosted a luxury open-air dinner in Naipaudu with their guests, including Russian Deputy Defence Minister Alexander Fomin. The official newspaper “The Mirror” wrote that the dinner was followed by a concert and a drone spectacle.

The United Nations estimates that 107 people were killed Saturday, including seven children, but warned that the death toll could rise further. Local media reported 114 dead.

An earlier report spoke of at least 90 people dead.

According to an army-controlled television station, the death toll was 45 and 552 arrests were made because protesters used firearms and bombs against security forces.

The death toll from the coup is at least 423, according to the Association for Aid to Political Prisoners, an NGO that keeps a record of casualties following the overthrow of the political government.

Citizens took to the streets of Rangoon and other cities on Sunday to demand the restoration of democracy, with many funerals taking place across the country.

“A girl was shot in the head and died in hospital, two men were killed on the spot,” said a first aid worker in Moniu.

In Hlaing, Rangoon district, a 16-year-old boy lost an arm when a grenade exploded while trying to throw it back at security forces who had thrown it at protesters, a first aid worker said.

Senior military officials from 12 countries, including the United States, Britain, Japan and Germany, have condemned the use of force by the Myanmar army against “unarmed” civilians, stressing that any “professional army” must “abide by international rules” and “to protect the people they serve, not to harm them”, with their extremely rare joint statement.

Also read: Myanmar | Blood flows non-stop from February 1 – Over 100 dead in one day