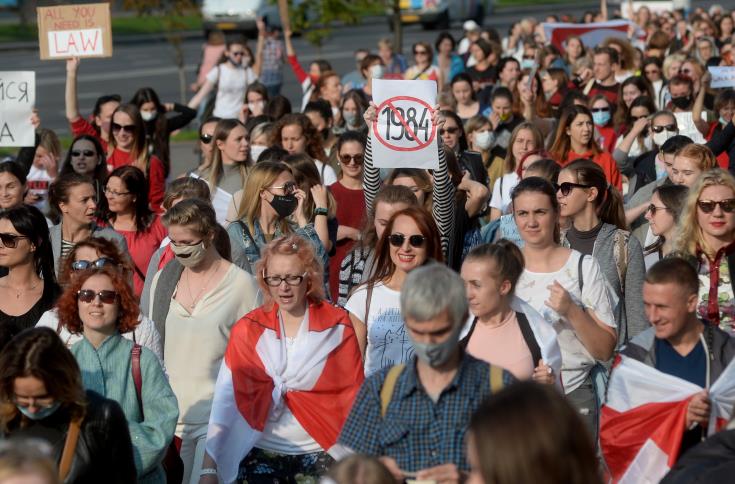 Tens of thousands went on the streets of Minsk and other cities in Belarus. This was the 36th day of protests against Alexander Lukashenko.

Belarusian police cordoned off a central square in the capital, Minsk, with barbed wire and began arresting dozens of protesters as they rallied for another anti-government rally today, a month after the presidential election.

One witness who spoke to Reuters agency said he saw a crowd of at least 10,000 people to go to Independence Square, where the headquarters of the government and the office of President Alexander Lukashenko are located.

On Saturday, at least 5,000 people marched in the capital, demanding the release of an opposition leader. A total of 114 people were arrested across the country last night, 99 of them in the capital, the interior ministry said.

Also read: The Belarusian army is on high alert – VIDEO

According to Interfax, the arrests today amount to about 250. Oktyabrskaya Square in central Minsk was cordoned off today with barbed wire. Independence Square was also blocked. Russia’s TASS news agency reported, citing Minsk police, that the arrests in the capital began before the protests. A woman who claimed to be Tatiana told Reuters that she had joined a large group of about 1,000 protesters. “Our soldiers surrounded us, selected some people, took them out of the crowd and beat them,” she said. Olga Semondanova, a senior Interior Ministry official, told Tass that police and ministry forces stepped up on the streets of Minsk to prevent the “illegal” protest, as she described it.

With information from: CNA,APA-MPA,Reuters-AFP-Tass / GBA, Euronews

Also read: The teleconference of the 27 on Belarus has been completed, full solidarity in Greece and Cyprus