Bayraktar TB2s | Parade with Hensoldt sensors in Turkmenistan
Defence Redefined
Published on 09/10/2021 at 17:16 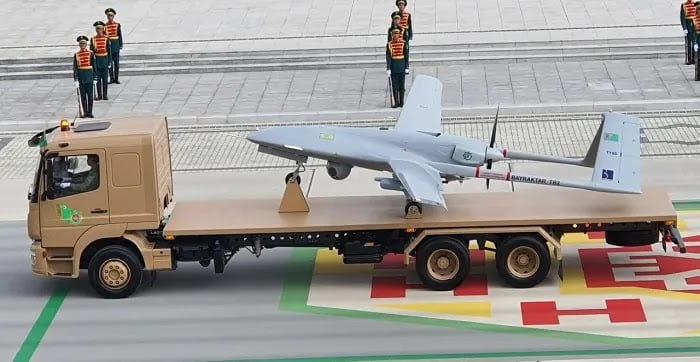 Turkmenistan’s latest display of military might, in the form of a parade commemorating the 30th anniversary of achieving independence, featured, among others, the country’s newly-acquired Turkish Bayraktar TB2 unmanned combat aerial vehicles (UCAVs).

The purchase of TB2 by Turkmenistan marks the latest in a string of acquisitions of the now infamous system. In fact, when also including the most recent recipient of the TB2, Morocco, the Bayraktar TB2 is the most commercially successful UCAV to this date in terms of the number of country operators.

Turkmenistan’s TB2s come equipped with a German ARGOS-II HDT EO/IR FLIR system produced by the German company Hensoldt rather than the Canadian WESCAM MX-15D or the Turkish Aselsan CATS. The modularity of the TB2 enables the fitting of several different types of FLIR systems, a feature that likely has contributed significantly to the drone’s commercial success.

The Canadian government’s decision to suspend the export of key drone parts to Turkey has once again thrown a spotlight on Turkey’s ongoing efforts to develop a self-sufficient defence industry.

However, Germany evades the issue of private-sector technology used by Turkish drones in the Artsakh War.

Turkmenistan’s TB2s also feature a number of improvements over earlier versions of the drone, including what appears to be an anti-jamming device on top of the fuselage and a second tail-mounted camera for night operations.

It appears that the Bayraktar TB2s will be based at a newly constructed airbase designed specifically with UAV operations in mind. Officially known as “The Center of Unmanned Aerial Vehicles”, the base is the first of its kind in the region and clearly signifies the value Turkmenistan puts in UAVs and their effective operations. First opened in August 2015, the center has so far been involved in the production and assembly of several types of small drones. 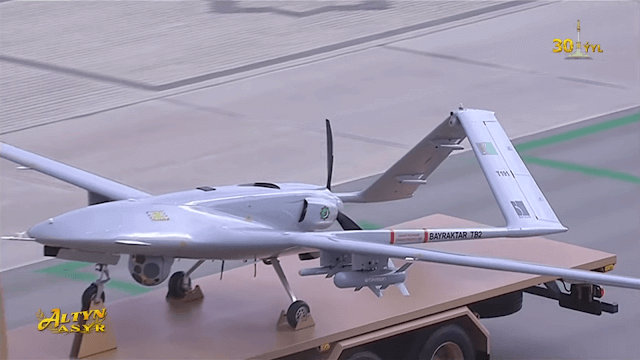 Its most recent expansion includes a small airbase with one runway dedicated to UAV operations along with hangars and all other necessary infrastructure for the operation of unmanned aerial vehicles.