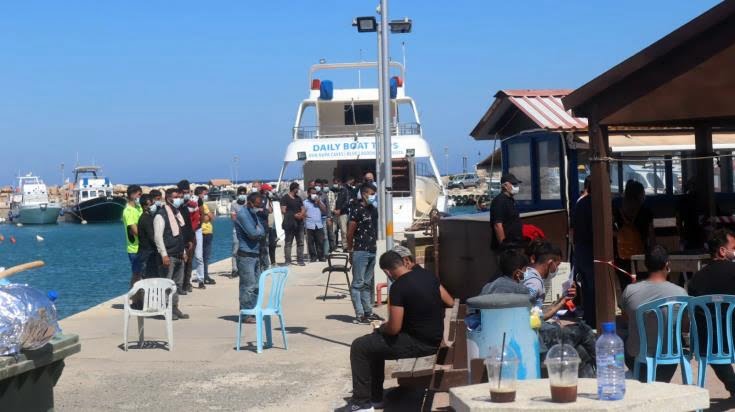 The captain of the boat that was transporting 97 immigrants from Syria to Cape Greco has been arrested.

A written statement from the Press Office of the Police Headquarters states that in the context of the investigation of a case involving the arrival of a number of illegal immigrants on Wednesday, May 19, in Cape Greco, the captain of the boat was arrested by court order.

A search of the details of all 97 illegal immigrants from Syria revealed that two of them were registered in the stop list as prohibited immigrants and were arrested by the Police.

Meanwhile, today in the square of the Community of Avgoros in the province of Famagusta, 14 people of Syrian origin were found, namely 10 men, a woman and 3 children.

Also read: All 64 illegal immigrants who arrived in Larnaca transferred to “Pournara”

It seems that all 14 people passed through the occupied areas and the British Bases and arrived in Avgorou.

Policemen went to the scene, recorded the details of the immigrants and tested them for COVID-19. Then they will be taken to the Emergency Reception Center “Pournara” in Kokkinotrimithia.

Meanwhile, a total of 98 illegal immigrants from Syria, who were found yesterday at noon, off Cape Greco, are still on board.

The ship was detected by the Port and Maritime Police around 13.30 at noon, 14 nautical miles northeast of Cape Greco.

A Police patrol boat went to the area and stopped the boat in question carrying 35 men, 23 women and 40 children.

Later today, accompanied by the Port and Maritime Police, all 98 illegal immigrants are expected to be taken to Larnaca, where they will disembark, so as to have their details recorded, test for Covid-19. After that, they will be taken to the “Pournara” Emergency Reception Center in Kokkinotrimithia.

Also read: Cape Greco | No access was permitted to 56 illegal immigrants so they returned to Lebanon