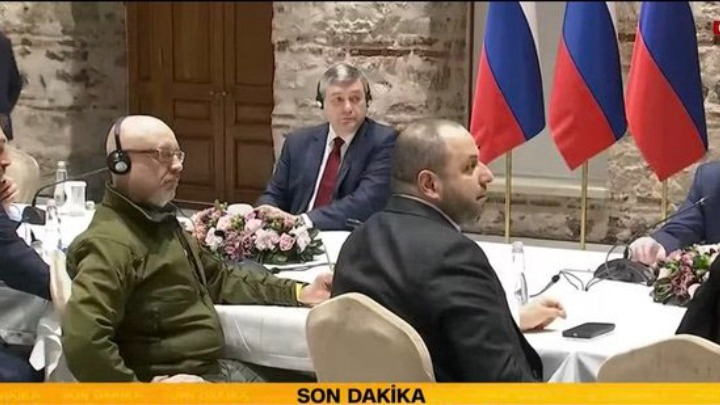 Talks between Russia and Ukraine begin at Dolma Bahce Palace in Istanbul, with Turkish President Recep Tayyip Erdogan welcoming the two delegations, stating that both sides have legitimate worries.

Addressing the negotiators prior to the commencement of talks, Erdogan added that the time had come for concrete results and called for an immediate ceasefire in Ukraine.

“It is up to both sides to put an end to this tragedy. Achieving a ceasefire and peace as soon as possible is in everyone’s interest. We believe that we have now entered a period in which concrete results are needed from the talks,” Erdogan said. The Turkish President also said that “the prolongation of the conflict is not to anyone’s benefit”, at a time when tens of millions of civilians have been forced to flee their homes in Ukraine.

“The negotiation process, which is being conducted under the command of your leaders, has raised hopes for peace,” he added. “Everyone expects good news from you,” he concluded. For his part, a Ukrainian journalist commented that “it was a cold reception, no handshake”, but did not specify whether he saw it himself or whether he was informed by officials.

Mikhail Pontoliak, an adviser to Ukrainian President Volodymyr Zelensky, wrote on Twitter that the delegations were discussing “the basic terms of the negotiation process. The delegations work in parallel on the whole range of friction points”.

The Ukrainian embassy in Ankara announced that talks have begun between the heads of the two delegations and will be followed by talks among all delegations. Russian oligarch Roman Abramovich is also present at the talks, according to photos published from the meeting in Dolma Bahce.

These negotiations between Russia and Ukraine – the first to be held live for more than fifteen days – are expected to be difficult and there are not many expectations that they will yield results.

The first meeting between the Foreign Ministers of Russia and Ukraine after the start of the war took place on March 10 in Antalya.