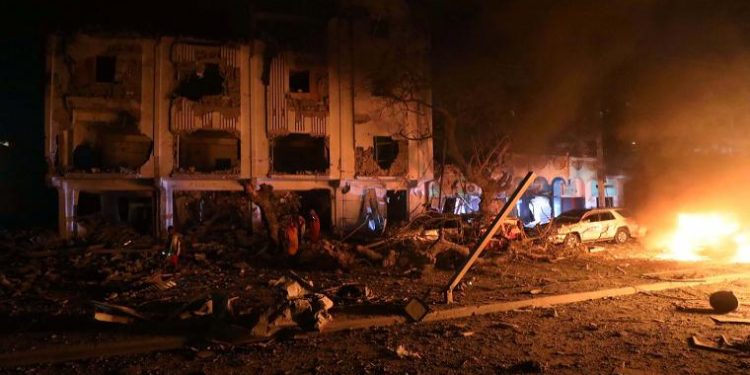 At least nine people, including local officials, and 10 others were wounded in two suicide bombings in central Somalia on Monday, which Shabaab claimed responsibility for, on a day when authorities announced that a top operative of the jihadist organization had been killed.

Mohammed Mualim Ali, head of police in Hiran district, said that the terrorists carried out suicide attacks using two vehicles packed with explosives in Baladwene about 300 kilometers north of the capital Mogadishu, adding that nine people were killed, including Hirsabel state’s Health Minister and the official in charge of Finance, while more than ten others were injured.

The attack, which targeted a government building, was claimed by the jihadists of al-Shabaab (“Youth”), an organization linked to al-Qaeda and fighting against the federal government for fifteen years.

Earlier yesterday, the Somali government announced the death of a top Shabaab leader, with a $3 million bounty, in an airstrike in the south. He was considered a candidate to succeed the ailing Shabaab leader Ahmed Dirige.

Abdullahi Yare, co-founder of the jihadist movement, was killed in a US UAV strike coordinated by the Somali military and its “international security partners” on Saturday, October 1, near the coastal town of Haramka, the Intelligence Ministry said.

In a press release, the US Africa Command (AFRICOM) confirmed that it conducted an airstrike on October 1 against the Shabaab network near Jilib, about 370 kilometers southwest of Mogadishu.

Also read: Somalia | At least 20 dead as Al-Shabaab steps up its actions

AFRICOM said the command’s initial assessment is that the strike killed a Shabaab leader and that no civilians were killed or injured. On Twitter, the US embassy in Somalia said it condemned the Shabaab attack in Balanduene, which targeted government officials working to bring peace to the region.

After being elected on May 15, President Hassan Sheikh Mohamud, faced with escalating Shabaab activity, vowed to eliminate it by waging all-out war.

On September 12, the head of state announced that members of Shabaab would be the target of upcoming operations and called on the population to stay in areas of the country under the control of jihadists.

Amid the Shabaab rebellion, the new government is called upon to prevent famine caused by Somalia’s worst drought in 40 years.

Shabaab was driven out of the country’s main cities, including Mogadishu, in 2011, but its fighters remain entrenched in vast areas of the province and are multiplying their attacks.

In May, US President Joe Biden decided to restore the US military presence in the country to help with operations against Shabaab, approving a Pentagon request. He thus reversed the decision of his predecessor, Republican Donald Trump, made at the end of his term to withdraw most of the US forces deployed there.

With information from: APA MPA, AFP

Also read: First US air strike on Somalia against al-Qaeda under Biden administration