SECURITY
Shark Robotics | Unmanned vehicles for firefighting and the armed forces at EUROSATORY 2022 – VIDEO & Photos
Defence Redefined
Published on 26/06/2022 at 15:01

The French company Shark Robotics showcased the range of unmanned vehicles it manufactures during the Eurosatory 2022 International Defence and Security Exhibition.

The fleet of unmanned multi-purpose vehicles presented by the company serve  various needs in the security and defence sectors such as firefighting and logistic support for the troops. DEFENCE ReDEFiNED visited the company’s booth during Eurosatory and talked with Shark Robotics’ CEO, Mr. Cyril Kabbara, who presented their interesting products (video at the end of the article).

The Barakuda multi-role Unmanned Ground Vehicle (UGV) can support infantry teams in a variety of missions on the modern, highly demanding battlefield. Among other things BARAKUDA is capable of carrying a stretcher for the wounded or it can be reinforced with ballistic protection to cover a combat team especially when operating in an urban environment. Furthermore, it can also carry equipment to lighten the equipment weight of the soldiers.

Shark Robotics UGV can overcome obstacles up to 30 cm high, feature Picatinny rods for placing various equipment, while it can be equipped with a water cannon, a large flow fan and a disinfection kit. 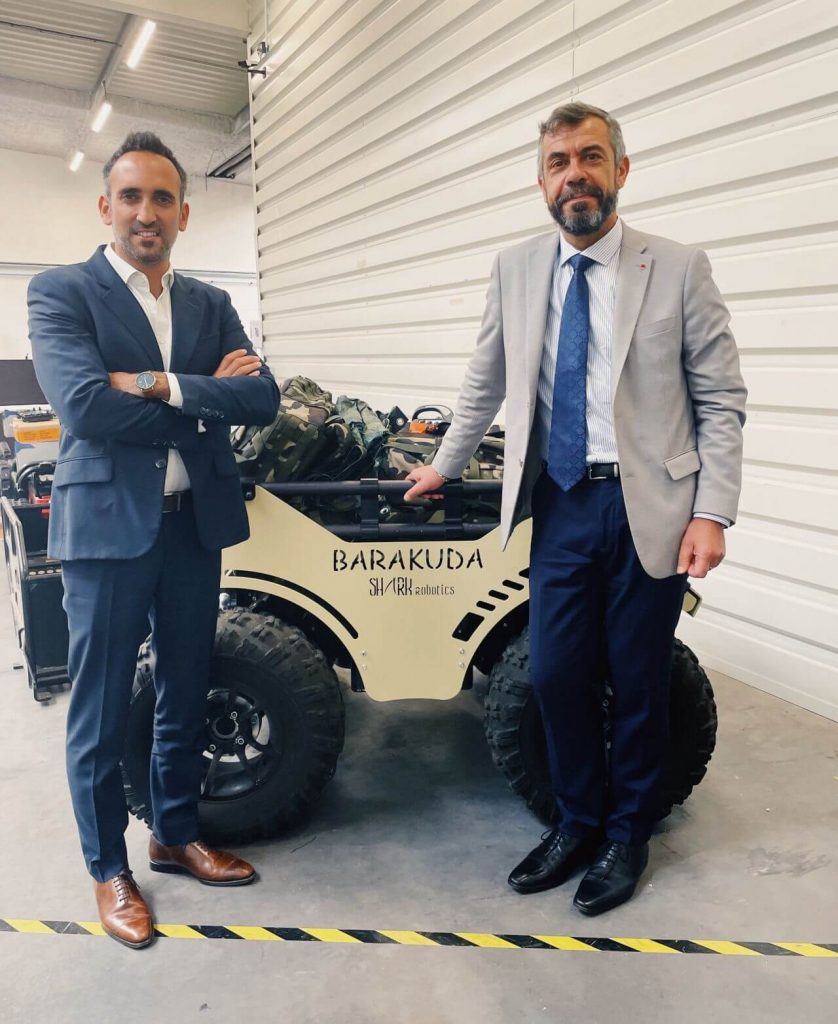 Colossus Robot makes an impression with his firefighting capabilities. This particular robotic vehicle was also used during the firefighting operations at Notre Dame in Paris during 2019. 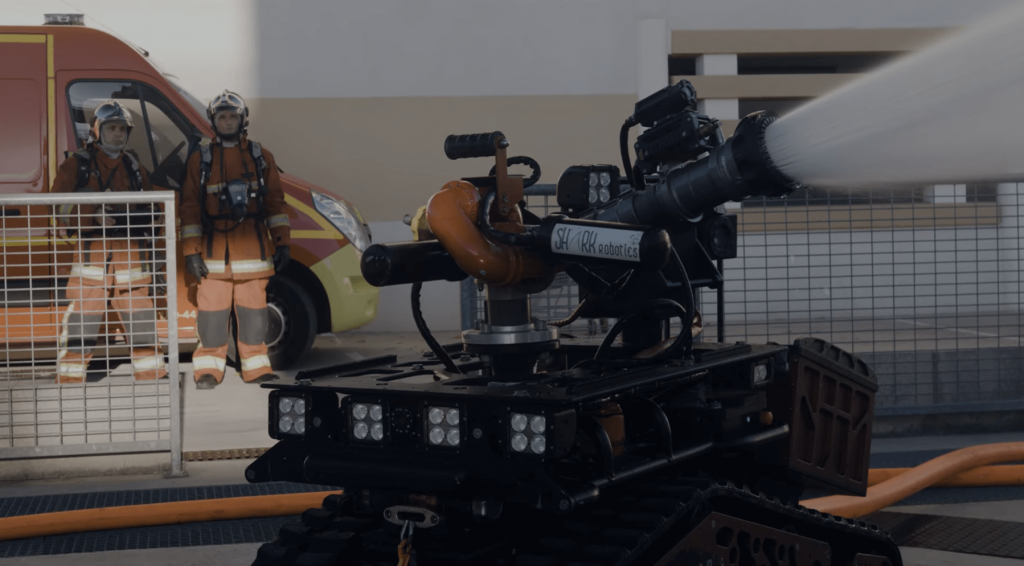 More specifically, in April 2019, Colossus intervened for 10 hours in support of the Paris Fire Brigade during the Notre Dame de Paris fire. The robots’ involvement had been decided at a time when the situation was becoming too dangerous for the firefighters: the temperature exceeded 800°C, the roof of the church was threatening to collapse, molten lead was falling inside the cathedral. Colossus participated in the preservation of the works inside Notre Dame thanks to the detection of hotspots and the extinction of the fire, towing hoses normally requiring the strength of 15 firemen. 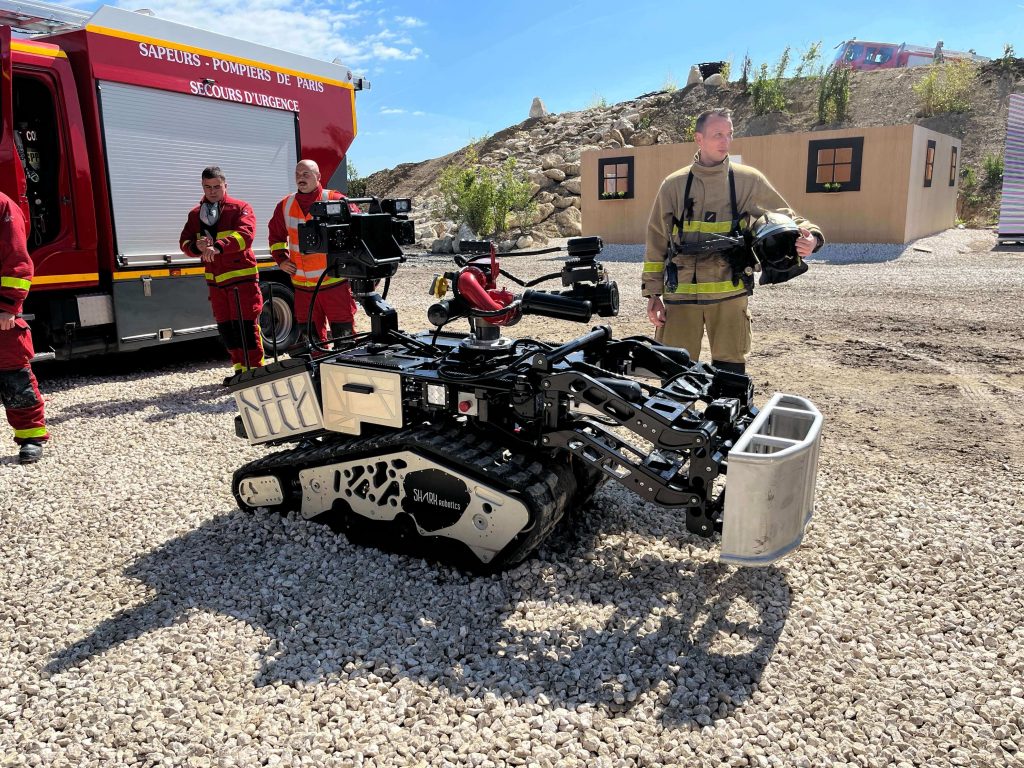 The Colossus is equipped with a water/foam cannon with a capacity of pumping 1000-3000 litres/min under a pressure of 7-15 bars and the ability to pull a load of one ton. It also features a turret with a thermal camera (zoom X30) and a wide coverage of 180°.

It can be used for a total of 9 different missions, including – apart from firefighting – obstacle removal with the special SH30 Arm which has a lift capacity of 60 kg, as well as carrying wounded personnel. Disinfection and observation are also included in its capabilities. Colossus is powered by two electric engines (4000W each) and 6 14S8P – 48V – 27AH lithium-ion batteries (Shark Energy Ultra Resistant).

The series of unmanned vehicles for firefighting is completed by the Rhyno Protect. Rhyno Protect is considered the “little brother” of the Colossus and has a water cannon with a capacity of pumping 1000 litres / minute, a camera with 360° rotation and Picatinny rods. Like the Colossus, it may be equipped with a SH30 Arm for a variety of missions, a stretcher for the wounded, an equipment transport basket as well as a CBRN and sanitising kit. Rhyno Protect operates with 2, 24V – 50 A lithium-ion batteries (Shark Energy Ultra Resistant). 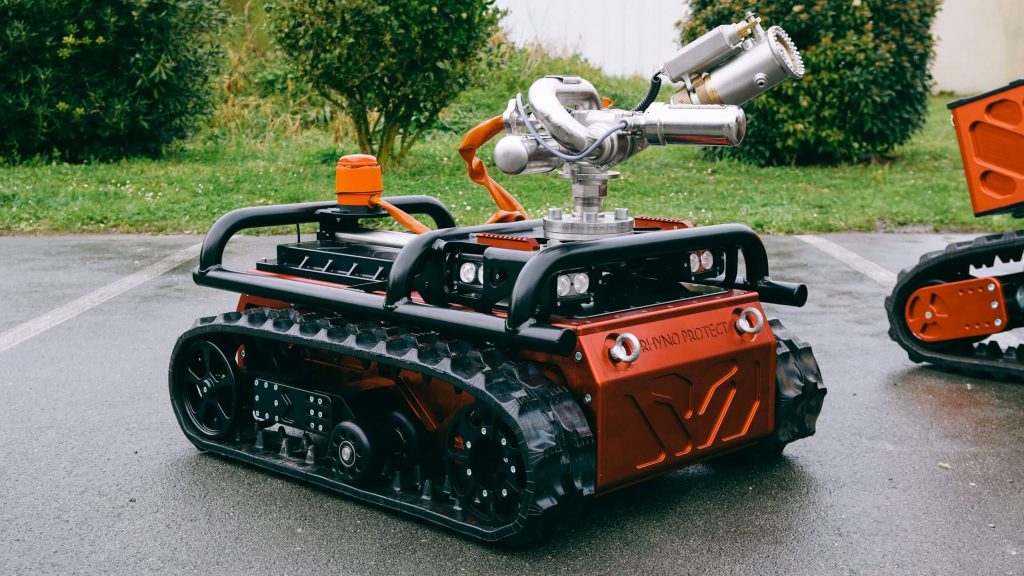 Another product presented to us is the Bulkhead robotic traffic spike system. The system in question has remote operation and – within 2 seconds – it can deploy a strip with metal spikes up to 4.2 metres long which immobilise a vehicle at a speed of up to 110 km/h by puncturing (deflating) its tires. This system is patented and can stay in standby mode for 10 days or execute 400 unfold cycles. 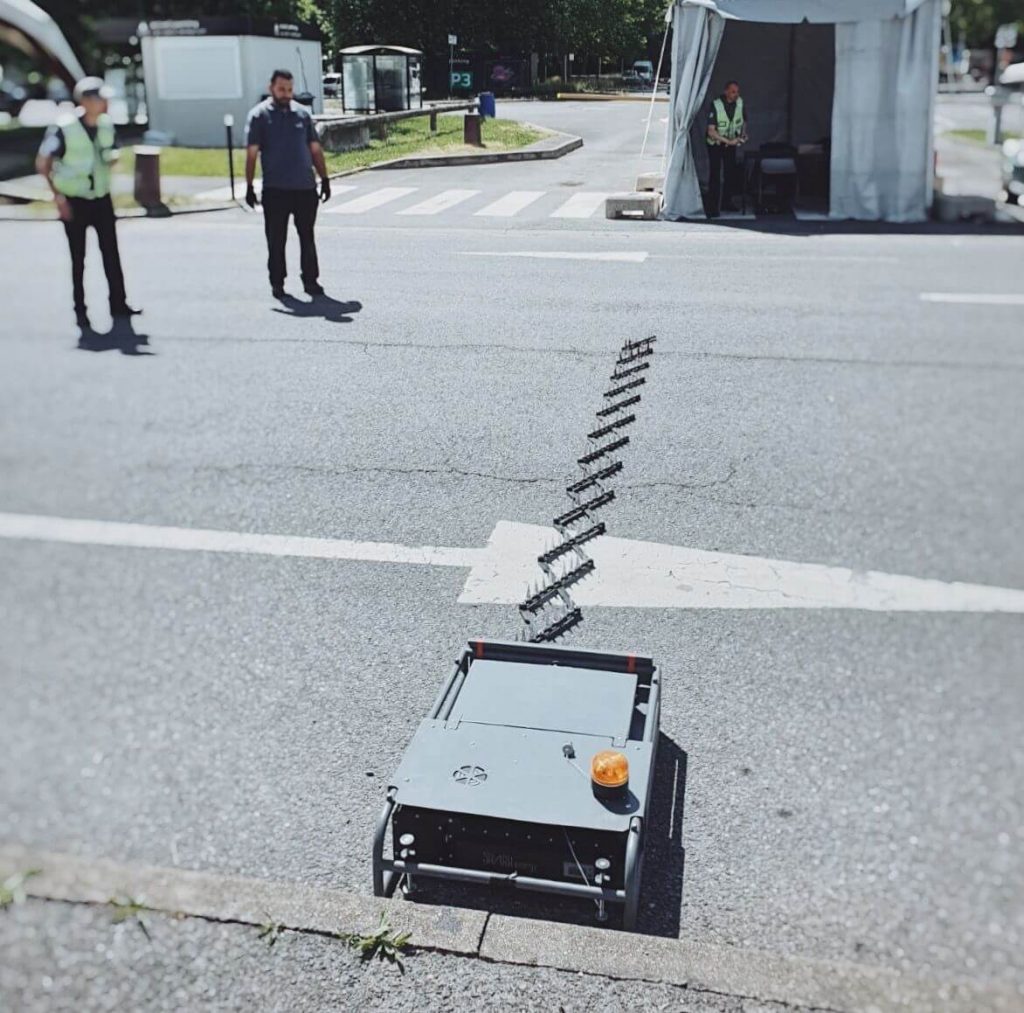 Shark Robotics has provided so far 6 robotic vehicles to the Paris Fire Department and 2 to the Marseille Fire Department, while it is in constant research and further development of its products.