NEWS
MEDOUSA-12/2022 | Major aeronautical exercise in Alexandria – A major mission of the National Guard – VIDEO and Photos
Defence Redefined
Published on 24/11/2022 at 16:51 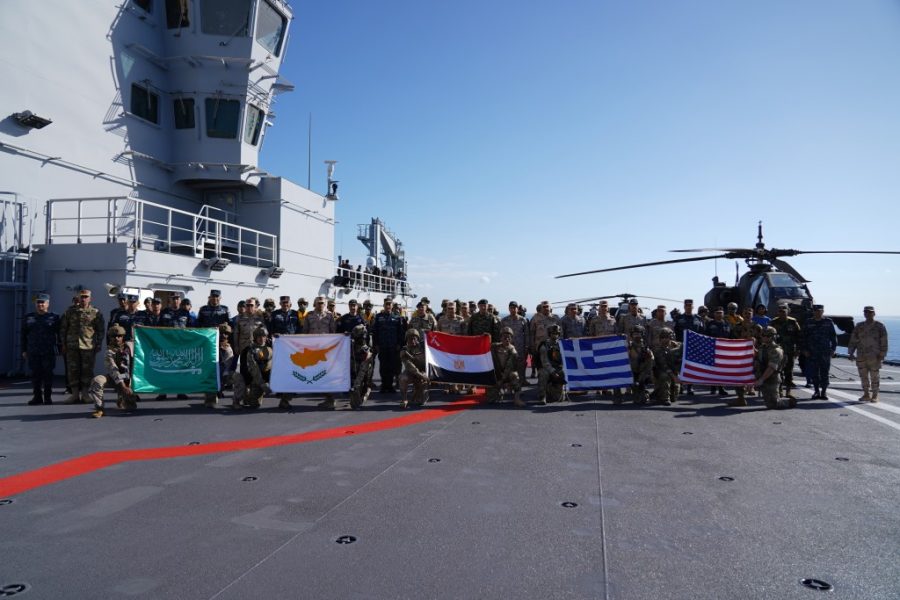 From November 19 to 25, 2022, the multinational aeronautical exercise “MEDOUSA-12/2022” took place in the sea area of ​​Alexandria, with the participation of aeronautical means and Special Operations units from Greece, Egypt, the Republic of Cyprus and Saudi Arabia. France, Germany, Romania, the United Arab Emirates, Jordan, Morocco, Bahrain and Congo participated with observers. The National Guard participated with General Support Ship ‘ALASIA’ and the Navy Command’s Underwater Demolition Team, an AW-139 helicopter of the Air Force Command and a Special Operations Team of the Special Forces Command. 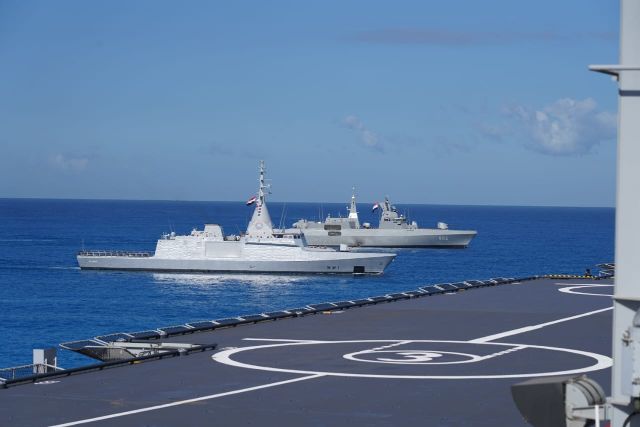 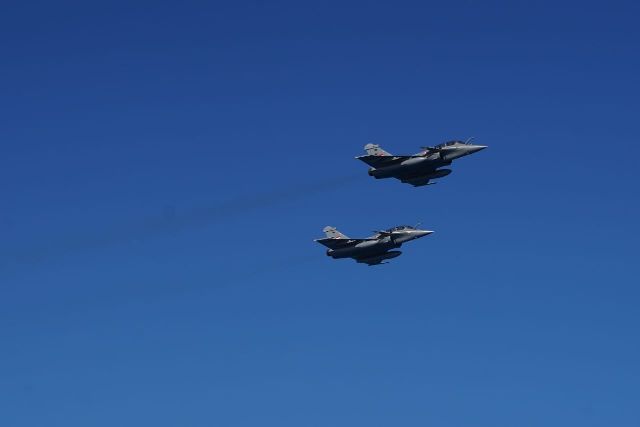 During the final phase, operational scenarios were executed which included static line jumps and paratroopers’ freefall from helicopters, boarding of a warship, joint landing action on the coast of “El Omayed” as well as virtual air attacks by attack helicopters and fighter jets. The Final Phase was completed with the aeronautical units’ salute before the Distinguished Visitors. 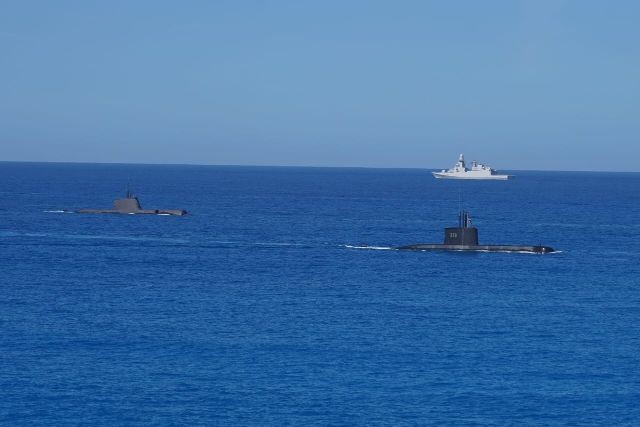 In his brief greeting before the Distinguished Visitors and after congratulating both the multinational Staff that directed the exercise and the personnel of the participating countries on its perfect organization and execution, the Chief of the National Guard pointed out the importance of international cooperation, including military exercises in improving mutual understanding and interoperability between the Special Forces at the operational level, and more broadly at the strategic level, in maintaining peace and security in the sensitive area of ​​the Eastern Mediterranean. 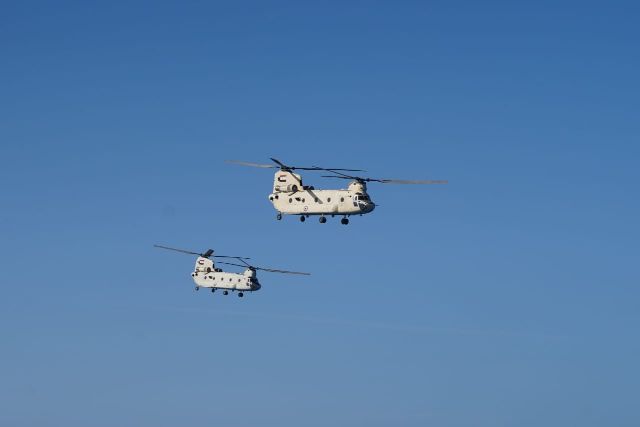 In his brief greeting, the Chief of HNDGS expressed his absolute satisfaction with the successful conduct of the exercise, which proved once again the high operational level of the participating units, and referring to the value of multinational partnerships, he emphasized their importance for security and stability in the wider Mediterranean region, which Greece and Egypt firmly support in practice. The participation of the National Guard in this year’s exercise MEDOUSA, which was the largest deployment of personnel and assets in an exercise abroad, significantly contributes to the increase of the operational capabilities of the participating states and confirms the excellent relationship and the high level of military cooperation that has been developed between the National Guard and the Armed Forces of these states. In addition, it reflects the wide network of partnerships developed by the National Guard in accordance with the directions of the Ministry of Defence, actively contributing to the common pursuit of ensuring security and stability in the wider region of the Eastern Mediterranean. 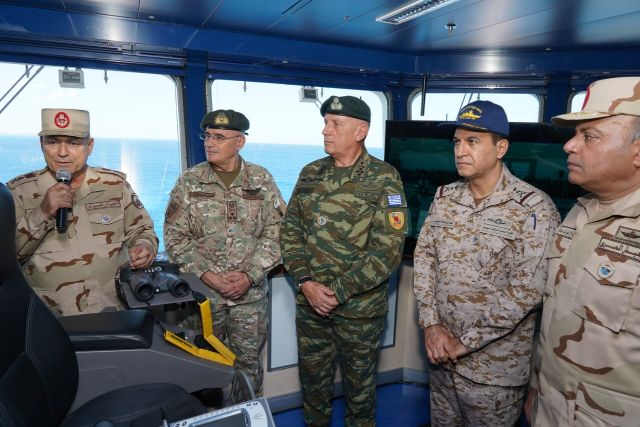 In the context of the visit of the Chief of the National Guard, Lt. Gen. Demokritos Zervakis, to Egypt, to monitor the Multinational Exercise “MEDOUSA 12/2022”, he held a meeting on Thursday, November 24, 2022, with his counterpart, Lt. Gen. Osama Roshdy Askar at the Headquarters of the Egyptian Armed Forces. 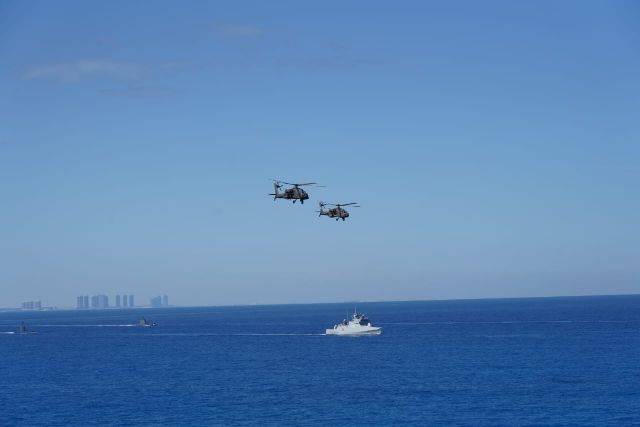 During the meeting, the two Chiefs initially assessed the exercise and, in addition to highlighting the excellent design and conduct by the personnel of the 4 participating countries, as well as the steadily increasing interest of other friendly countries in participating in the exercise, they recognized the contribution of both exercise MEDOUSA and other respective international exercises to regional security and stability. They also discussed the current developments in the Eastern Mediterranean and the Middle East as well as other issues that have a wider impact on global and regional security and stability, such as the situation in Ukraine and Libya.

In addition, there was a review of the progress of the implementation of the Bilateral Defence Cooperation Program, the corresponding Tripartite cooperation with Greece for the current year as well as an extensive exchange of views regarding the actions planned to be included in the respective programs for 2023, the conclusion of which is in the final stages.

With information from: HNDGS, GEEF