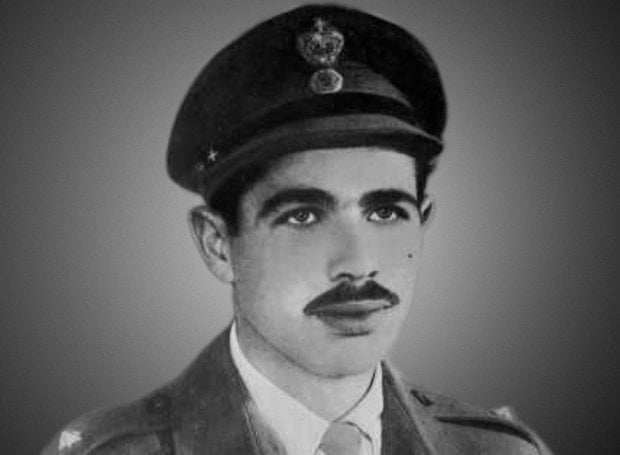 Born on February 22, 1928, in Lysi village, in the province of Famagusta, Grigoris Afxentiou was to write his name in the History of Hellenism, next to the names of the great heroes of the Nation.

Son of Pieris and Antonia Afxentiou, Grigoris attended the Primary School of his village and the High School of Famagusta, the one closest to Lysi. Then, he went to Greece to study at the Hellenic Military Academy, however he failed the entry exams. He nevertheless enlisted in the Hellenic army and attended the School of Reserve Infantry Officers. He graduated from the Army as a Reserve Infantry Lieutenant and then served on the Greek-Bulgarian border for a few months, before returning to Cyprus in 1952 where he worked with his father. 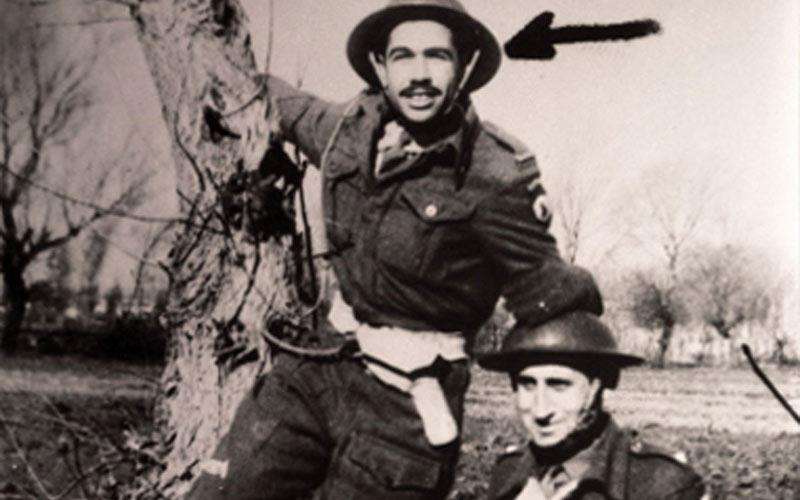 Grigoris Afxentiou in the uniform of the Greek Army

The beginning of the Liberation Struggle of EOKA in 1955 found Grigoris ready to take action. On January 20, 1955, the first meeting of Afxentiou took place with Georgios Grivas, who was the leader of EOKA. Then, Grigoris took the Military Honour oath rather than the established oath of EOKA, and so he participated in the liberation struggle against the English.

Under the pseudonyms “Zidros”, “Rigas”, “Aiantas”, “Aris”, “Mastros”, “Antaios” and “Zotos”, he fought hard against the British occupation forces, and very soon he was given the position of EOKA deputy chief. The English were looking for Grigoris since the first day of the Liberation Struggle, on April 1, 1955. So Afxentiou, then the Chief of Famagusta-Varosia, was transferred to the province of Kyrenia, where he served as head of EOKA until September 1955. After that, he served as Chief of Pitsilia, until the end, that is, until March 3, 1957.

Afxentiou’s action in the Liberation Struggle was multifaceted as he undertook training tasks for fighters in guerrilla warfare techniques, sabotage and attacks against British detachments, convoys and even facilities. He was the most wanted man by the British, who initially put 250 pounds on his head followed by the exorbitant amount of 5,000 pounds.

Both in Pentadaktylos and in the area of ​​Troodos where he later took refuge, the action of Grigoris Afxentiou spread terror among the British troops and his fame became known beyond Cyprus. Secretly and under novel circumstances, he married one night in the monastery of Achiropoietos in Lapithos on June 10, 1955, his then fiancé Basilia Panagi. On December 11, 1955, in an action that even the greatest generals would admire, he demonstrated his excellent military skills in the historic Battle of Spilia, beguiling two phalanxes of English soldiers ascending towards the hiding places of the area into colliding with each other. The Easter of 1956 found the “Eagle of Machairas” recovering in the monastery of Machairas, after an appendicitis surgery. There, for the first time, he appeared before the English in disguise as a monk, with a beard and a robe.

On December 31, 1956, on New Year’s Eve, Afxentiou is surrounded with his team in the village of Zoopigi, where a fierce battle ensues. Grigoris is injured but escapes, but Makis Georgallas falls dead.

On March 3, 1957, following a betrayal, the British discovered his hideout near Machairas. Dozens of British soldiers surrounded the hideout in vehicles and helicopters. After shouting at the fighters to surrender and receiving no response, they started firing at the hideout. The battle lasted for many hours. The team of Afxentiou inside the hideout included the fighters Andreas Stylianou, Augoustis Efstathiou, Antonis Papadopoulos and Pheidias Symeonidis, whom, however, Afxentiou ordered to leave the hideout and surrender so as to be saved. Determined not to fall into the hands of the English alive, he said to them verbatim:

“So far you’ve learned how the Greeks fight. Today, you will learn how they die”

On his own, Grigoris Afxentiou faced the forces of the largest empire in the world, wounded by a grenade fragment. Upon the urging of the English to surrender, he had only one answer to give: “Molon Labe” (“Come and take [me]”) (quoting Leonidas, King of Sparta). Shortly afterwards, four soldiers attempted to storm the hideout. Afxentiou welcomed them with a barrage of fire. The three soldiers retreated in fear, while the fourth, a captain, fell dead. After the grenade was dropped in the hideout Grigoris’ comrade-in-arms, Augustis Efstathiou, was ordered by the English to return and verify if Afxentiou was alive and to persuade him to surrender. Augustis preferred to stay on his chief’s side. Afxentiou then shouted to the English:

The only color photograph of Grigoris Afxentiou

The battle continued until the afternoon. The purpose of Afxentiou was to make the battle last until nightfall and take advantage of the darkness to attempt an exit. The British soldiers, realizing the two fighters’ purpose, spilt gasoline on the hideout, set it on fire and burned Afxentiou alive, while Augustis Efstathiou, suffering severe burns, attempted to escape and was arrested.

After his death, Grigoris’ father, Pieris, and his mother, Antonou, revealed in the strongest possible way what it means to have values, ideals and, above all, a great soul. Initially, it was his father who came out of the morgue smiling, where he had been called to identify his son’s burnt body. According to the testimony of the lawyer Michalis Triantaphyllides, Pieris Afxentiou, passing through the morgue, after the identification process, had a grin from ear to ear, even though everyone knew what he saw there. However, entering the car, heading to Nicosia, Pieris Afxentiou burst into tears. Asked by the lawyer why he suddenly started crying, he replied: “No, my son, we shouldn’t let the ‘dogs’ see us crying.”

Antonou Afxentiou, on the other hand, said it all at her funeral:

“It is an offend

for a mother of such a hero

to offend her brave son,

whom she will enjoy.

My Homeland is worth of

and since he did not surrender

let him be blessed by me”

The burnt body of Grigoris Afxentiou was buried on March 4 in the Central Prison of Nicosia, in the area now known as “the imprisoned graves” by the British soldiers for fear of people’s protests.

At the site of the last battle of Afxentiou, a monument has been built while a huge statue of his figure was erected in the adjacent monastery. Many Greek and foreign poets were inspired by the struggle and death of Grigoris Afxentiou and wrote poems in his honor, such as the Cypriot poet Costas Montis and Giannis Ritsos with the poem “Farewell”. His memory is honored every year with a memorial service at the Machairas Monastery, on a date approaching that of his death. In October 2016, the Minister of National Defence of Greece, Panos Kammenos, honorably handed over the rank of Lieutenant General to the relatives of Afxentiou.

The Centre of Folklore and Historical Unity of Thrace-Cyprus “Grigoris Afxentiou” was founded by the Association of Cypriots of the Prefecture of Xanthi and the Municipality of Vistonida with the help and support of the Council of Historical Memory of the EOKA Struggle 1955-1959. The Center is in the Afxentio settlement about 10 km from Xanthi, because the settlement was renamed from Neo Katramio to Afxentio in honor of Grigoris Afxentiou, at the request of its inhabitants in 1960. The settlement was founded in 1924 by refugees from Asia Minor.

Document on the life and action of Grigoris Afxentiou: