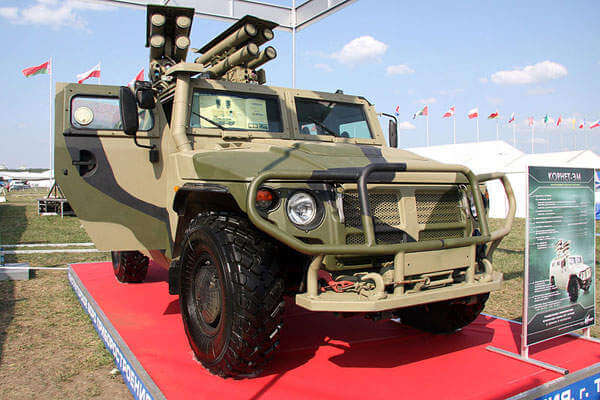 The Kornet-EM is a multi-purpose anti-tank missile system designed and manufactured by KBP Instrument Design Bureau. The missile system was first unveiled in Moscow (MAKS) in August 2011 and subsequently at the Russian Arms Expo (RAE) in September 2013.

According to the company, the missile system is designed to destroy advanced and modern tanks fitted with explosive reactive armor, light-armored vehicles, and fortifications. It can also engage surface-level marine and low-speed aerial targets at ranges between 150m and 10,000m.

The Kornet-EM missile system is an upgraded version of the Kornet anti-tank missile system. The new system is designed to penetrate explosive reactive armor from 1,100mm to 1,300mm and offers high immunity against jamming.

It can fire three missiles including the 9М133М-2 anti-tank guided missile and the 9М133FМ-2 and 9М133FМ-3 guided missiles. The twin Kornet-EM salvo firing unit mounted on the vehicle’s platform carries an ammunition payload of 16 pieces, including eight ready-to-fire missiles.

The Kornet-EM is available in two configurations, which include an automatic launcher for deployment on carriers and a transportable launcher for combat operations under different environmental conditions.

The automatic launcher is controlled by an automatic and laser beam riding guidance system. It is fitted with high-resolution cameras and third-generation thermal imaging sight. Each launcher module weighs 75.2kg. The automatic launcher can lay missiles at an azimuth angle of ±180° and elevations between -5° and +45° for ranges between 200m and 15,000m. It engages the targets automatically and can perform salvo firing at two targets simultaneously.

The Kornet-EM system can also destroy armored targets equipped with explosive reactive armor (ERA), by firing two missiles in a single beam. The system can be deployed on various carriers with small loading capacities.

Regarding the portable-transportable launcher, it can be installed on wheeled and tracked vehicles. It can fire at an azimuth of 360° and elevation ranging from -5° to +20°. Also, a sighting channel with a variable magnification of 12х to 20х is fitted to the Kornet-EM portable-transportable launcher to increase the range of target detection and reduce sighting errors. The system also features a laser beam riding guidance system.

Details of the missiles

The 9М133М-2 anti-tank guided missile travels at a speed of 300m/s and can be fired against targets ranging between 150m and 8,000m. The missile weighs 31kg including the 1,210mm long container. The missile can penetrate into armor with thicknesses between 1,100m and 1,300mm.

The 9М133FМ-2 guided missile weighs 31kg and has a 1,210mm long container. The missile travels at a speed of 300m/s and can reach a maximum distance of 8,000m. The explosive force of the missile is 10kg TNT equivalent.

The 9М133FМ-3 guided missile weighs 33kg and has an explosive force of 7kg TNT equivalent. The maximum speed and range of the missile are 320m/s and 10,000m respectively.

As announced by the Ministry of National Defence 2 months ago, the then Deputy Minister of National Defence, Alkiviadis Stefanis, informed the members of the Special Standing Committee on Armament Programs and Contracts of the Hellenic Parliament about the program, which was welcomed, over the acquisition of Kornet-E Anti-Tank Guided Missile System. Greece completed the receipt of the first systems, which are already operational, in 2002.