Anastasiadis – Sanchez | Cyprus issue, immigration and Turkish provocations at the meeting of the two leaders in Madrid
Defence Redefined
Published on 09/12/2021 at 16:30 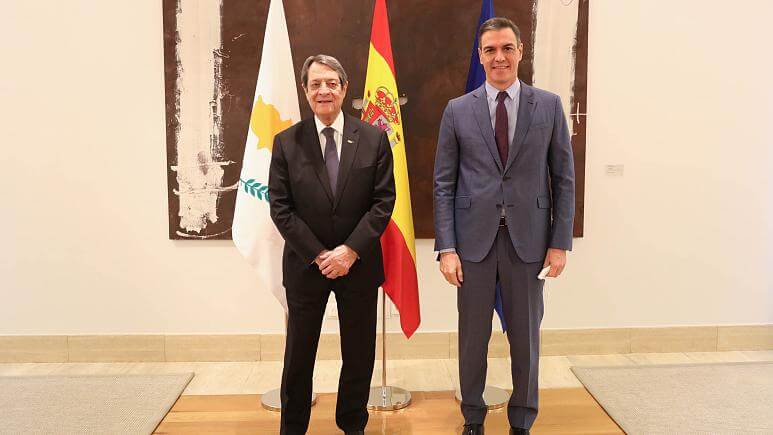 The Cyprus issue, illegal immigration, and Turkish provocations were the main topics of discussion between the President of the Republic of Cyprus and the Prime Minister of Spain Pedro Sanchez in Madrid.

President Anastasiadis is paying an official visit to Spain today, where after having his first meeting with King Philip VI of Spain, he met and held talks with the Spanish Prime Minister.

During the meeting, issues related to, among others, the European agenda, the developments in the Cyprus issue and the Turkish challenges in the maritime zones and on the territory of the Republic of Cyprus, immigration, the efforts to deal with coronavirus pandemic, regional developments, Southern Neighborhood policy and Western Balkans issues were discussed.

During the meeting, the two leaders reiterated the excellent relations between Spain and Cyprus and discussed global challenges and important issues on the European agenda. The two leaders also exchanged views on the COVID-19 pandemic and stressed the importance of exchanging knowledge, know-how, best practices, and technology. They also reaffirmed their commitment to the EU Recovery and Resilience Fund to boost their two countries’ economies and recover from the impact of COVID-19.

They also agreed on tackling immigration, and in the light of the Mediterranean countries of first entry, stressed the importance of adopting a new Asylum and Immigration Pact that will allow the EU to respond quickly and guarantee effective management of immigration flows, based on shared responsibility and effective solidarity.

Also read: Cyprus | Exploration and exploitation of block 5 not to affect Turkey

In addition, the two leaders expressed their great satisfaction with the signing, on this occasion, of three Memoranda of Understanding, in the health sector, the political consultations between the Foreign Ministries, and the cooperation between the Spanish Diplomatic School and the Cyprus Diplomatic Academy. They also expressed their strong will to strengthen and deepen relations in trade, innovation, tourism, culture, and education.

The leaders reiterated that a peaceful, stable, secure, and prosperous Mediterranean is a strategic priority for the EU and expressed their support for the sovereignty and territorial integrity of the two countries. They also stressed the importance of respecting the sovereign rights of each state in their maritime zones in accordance with international law, including the Law of the Sea.

Finally, they reaffirmed their strong support for a comprehensive and sustainable settlement of the Cyprus problem, on the basis of a bi-communal, bi-zonal federation with political equality, as set out in the relevant UN Security Council resolutions and in line with the acquis, EU principles and values.

They also stressed that, with regard to Varosia, all resolutions and statements by the UN Security Council and the decisions of the European Council, should be respected and applied in order, inter alia, to create a favorable environment which will, in turn, contribute to a comprehensive and sustainable political settlement. This will not only benefit the people of Cyprus, both Greek- and Turkish-Cypriots but will also make a significant contribution to peace and stability in the wider region.

Also read: M. Varvitsiotis | “We are not happy with the strengthening of the defence cooperation between Madrid – Ankara”