Ν. Dendias | Greece at the disposal of Libya for the delimitation of maritime zones
Defence Redefined
Published on 12/04/2021 at 16:47 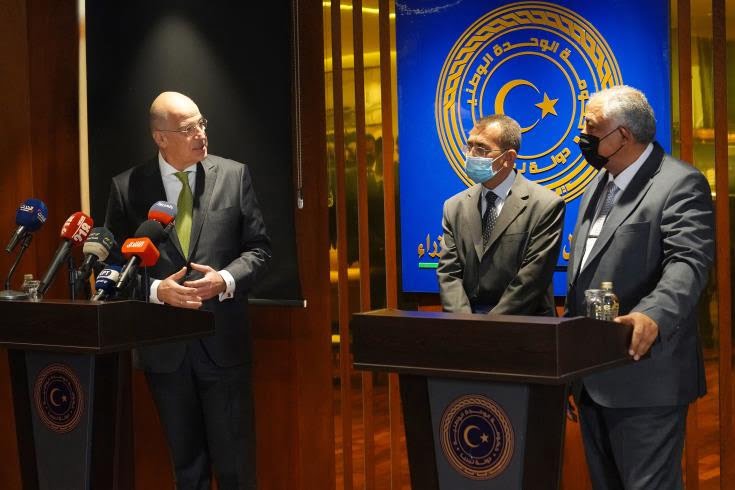 In his statements following his meeting with the Deputy Prime Minister of Libya, Hussein Atiya Abdul Hafeez Al Katrani, Greek Foreign Minister Nikos Dendias underlined Greece’s readiness to hold the necessary talks with Libya on the delimitation of maritime zones between the two countries.

As Nikos Dendias noted, his visit to Libya is a continuation of the visit of the Greek Prime Minister last week and signals the full support of the Greek Government “in the transitional government of Libya and in the electoral process that will take place in December.”

“Greece has always argued that the solution to the problem in Libya must be brought about by the immediate withdrawal of all foreign troops and foreign mercenaries from Libyan territory. This must be done immediately and the Libyan people must be responsible for the fate of their country,” Dendias said.

On the issue of the Turkish-Libyan memorandum, the Greek Foreign Minister noted: “[I] would like to thank you, Deputy Prime Minister, for your direct stance on the illegal ‘memorandum’ signed by the GNA Administration and Turkey on maritime zones. I would also like to thank you for reminding me of what we already know, that is, the decision of the House of Representatives not to ratify this illegal ‘memorandum’.”

At the same time, regarding the delimitation of the maritime zones between the two countries, Mr. Dendias stated that “Greece is at the disposal of Libya to agree on our maritime zones. After all, as you rightly told me, we had almost reached a conclusion in 2010. There were only a few things left to conclude then this agreement.”

“And of course, we are here to activate the entire agreements framework with Libya and to conclude new agreements to help in any way we can in the reconstruction of the country,” he added, noting that the reopening of the Greek Embassy in Tripoli and the re-establishment of the Greek Consulate in Benghazi are part of this effort.

Closing, Mr. Dendias referred to the Greek community in Libya, which, as he said, “is ready to help rebuild the country.”

During his visit to Libya, the Greek Foreign Minister will meet the spokesman of the House of Representatives Aguila Saleh as well as members of the Greek community in Libya.

Also read: Mitsotakis’ visit to Libya | “Greece is ready to support Libya in all ways”