Ischemic Bandage (Tourniquet) | Dealing with massive hemorrhage on the battlefield
Published on 21/08/2021 at 17:15 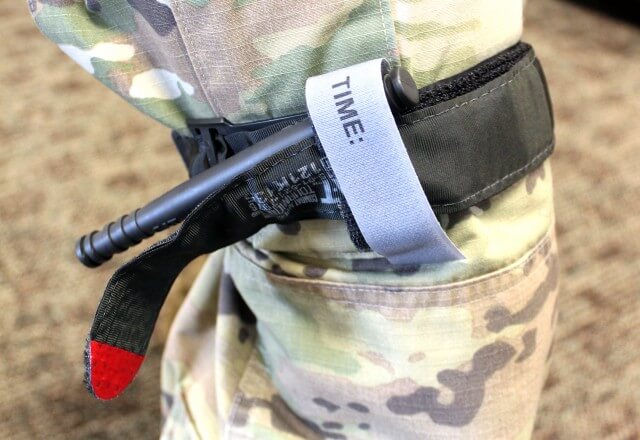 One of the sectors – among the most crucial ones – that has recently been introduced to the National Guard is the tactical care of the wounded on the battlefield.

Systematic science research on modern battlefields has allowed the development of the field of the care of the wounded on the battlefield; thus, armies can now provide certified and systematic training to their personnel.

One of the most usual causes of death on the battlefield is massive hemorrhage. According to a study by the US Army Institute of Surgical Research, based on data collected from 2001-2004 from Special Forces units involved in the war on terror, 25% of potentially preventable deaths involved massive hemorrhage caused by limb injuries. Investigations with similar results have been conducted for other cases too.

One of the most common ways to prevent massive hemorrhage caused by limb injuries is the use of an ischemic bandage (tourniquet). Various types of ischemic bandages have been used on the battlefield for centuries and their modern form has already been tested in several conflicts. There has been a strong suspicion for a long time as to whether they damage the limbs by blocking the blood flow, which is why their use is avoided by first aid hospitals. However, research has so far shown that their use is safe and – many times – life-saving, especially on the battlefield.

The ischemic bandage is placed slightly above the bleeding limb wound, not on the joints or over equipment. If the casualty is in Care Under Fire (CUF), the tourniquet can be placed high and tight even over the clothing due to the condition. At the Tactical Field Care stage, where enemy fire has been disengaged and the casualty is at a point where coverage is provided, it is placed directly on the skin and the placement time is controlled.

Every soldier must have at least one ischemic bandage in a prominent place. The reason is because the bandage used on each injured person is his own. Therefore, it is ideal for each soldier to have more than one as both limbs may be injured or the urgent treatment of another wounded (citizen etc) may be required.

Mainly due to the specificity of the battlefield, the use of an ischemic bandage is more effective than direct pressure at the site of bleeding or pressure bandaging, as these methods are more time-consuming and increase the risk of being once again attacked by enemy fire. In addition, each soldier must be trained so that, if possible, they can place it on themselves. In this way, there is no need for a first responder, which deprives another weapon from the army fighting against the target.

The US military has found that three types of ischemic bandage are fully effective in blocking blood flow. Combat Application Tourniquet (CAT), SOF Tactical Tourniquet (SOF-T) and Emergency and Military Tourniquet (EMT). The CAT and SOF-T can be applied by tightening a mechanism with a special rod. They are light and relatively cheap, while the CAT in particular is preferred as an indispensable part of personal gear. It is the type most commonly used in the National Guard. The EMT is more expensive and used with air pressure. It is mainly used in emergency departments, as it is vulnerable to debris and explosions.

Training in the items of tactical care of the wounded on the battlefield is mostly based on the American training system Tactical Combat Casualty Care (TCCC). In recent years, the National Guard has commenced the training of TCCC personnel in academies in Greece and abroad, while a similar academy operates in Cyprus with the cooperation of the competent health agencies, the police and the army. Similar training is provided to the police forces. At the same time, the use of the ischemic bandage began to expand in almost all units and especially in the special forces where it is a given.

In addition, once the personnel of many units are trained on these items, the basic knowledge is then transferred to the rest. It is worth mentioning that similar training is attended by reserve volunteers.

The Ministry of Defence and the National Guard General Staff (GEEF) must ensure that officers and soldiers have the basic equipment and training for the care of the wounded on the battlefield and in particular to procure ischemic bandages en masse. The result will not only be fewer casualties on the battlefield, but also higher morale before the battle as the soldier has in mind that he can take care of himself, rely on his comrades and help him when needed.

Also read: Individuals request the 106 SNE for use | What applies today for the provision of medical care in the National Guard