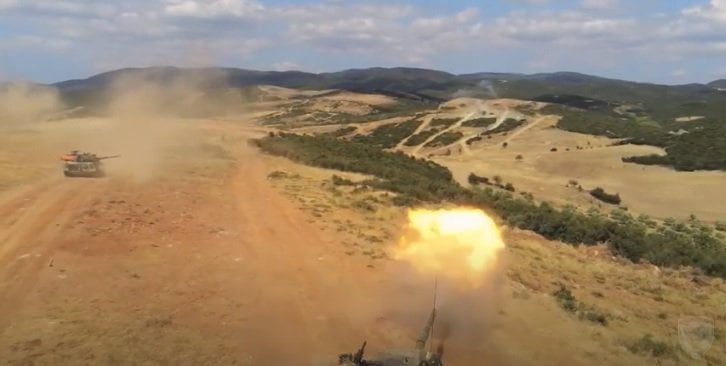 According to an announcement by the Army General Staff (GES), Tactical Exercises were conducted in two different firing ranges on August 26 and 27, 2020.

Specifically, on Wednesday, August 26, 2020, the Tactical Exercise (TAMS) “EKTORAS-20” was held at the Exercise-Firing Field “AETOS” in Alexandroupolis.

In the exercise, in which procedures and techniques of conducting offensive operations were examined, participated personnel and means of the 31st Mechanized Brigade (“ΚΑΜΙΑ”), such as Leopard Main Battle Tanks (MBTs) and M113 Armoured Personnel Carriers (APCs) .

In this exercise, likewise procedures and techniques of conducting offensive operations were examined, with the participation among others of Leopard MBTs and VBL armored reconnaissance vehicles, of the 50th Mechanized Brigade (“APSOS”).

Both exercises were conducted in the presence of the Commander of the Delta Army Corps (“THRAKI”), Lieutenant General Angelos Ilaridis.

Also read : “NIKITIS-DIMITRA 2020” Exercise | Watch the video made by the General Staff of the National Guard