INTERNATIONAL RELATIONS
USA | “We will defend Taiwan militarily in the event of a Chinese invasion”
Defence Redefined
Published on 23/05/2022 at 17:30 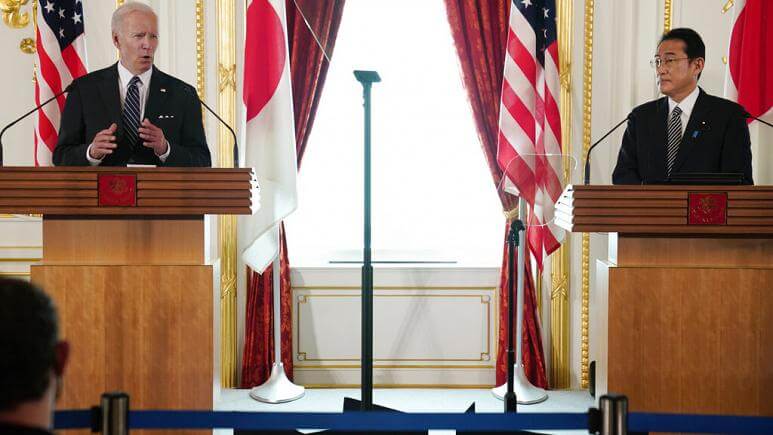 The United States will defend Taiwan militarily if Beijing invades the autonomous island, US President, Joe Biden, warned from Tokyo, noting that China is “flirting with danger.”

“This is a commitment we have made,” he said when asked if the United States would intervene militarily against a Chinese attempt to seize the territory by force. “We agreed with the policy of one China, we signed it (…) but the idea that (Taiwan) could be occupied by force is simply not appropriate,” he added.

Japan and the United States “will monitor the recent activities of the Chinese Navy as well as any movements related to the joint exercises of China and Russia,” said the Japanese Prime Minister, Fumio Kishida, after meeting with the US President.

“We strongly oppose attempts to change the status quo by force in the East China Sea and the South China Sea,” Kishida told a joint news conference with Biden. “In addition, we have agreed to work together on various issues related to China, including human rights,” he said.

Referring to Russia, the US President also said in the same press conference that “Russia must pay a long-term price over its barbarism in Ukraine” with sanctions from the US and their allies. “This is not just about Ukraine,” he said. “If the sanctions were not maintained in many ways, then what message would this send to China at the cost of an attempt to occupy Taiwan by force?”, he asked.

Noting that he expects such an invasion “will not happen”, Biden noted however that this will depend “on the intensity with which the world will make China understand the price it will have to pay in case of invasion.”

However, Biden also noted that he was considering lifting tariff barriers for China, stressing that they were not imposed by his government. “We have not imposed these tariff barriers,” he said when asked by reporters about the possibility of lifting them, adding that it was “under study”.

At the same time, the US President announced the start of a new economic partnership in the Indo-Pacific region with the top 13 participating countries, including the United States and Japan, but not China.

The Indo-Pacific Economic Framework (IPEF) is not a free trade agreement, but envisages further integration between its member countries in four key areas: digital economy, supply chains, green energy, and the fight against corruption. Beijing reacts strongly to this prospect.

China has asked US President, Joe Biden, “not to underestimate its strong determination for its sovereignty,” after his statements that he will defend Taiwan militarily in case of an invasion by the Chinese Army.

Since the end of the China Civil War in 1949, Taiwan is governed by a democratically elected government. Beijing still aims to “reunite the island with its motherland”. Ιt has not ruled out using force, especially if the Taiwanese authorities formally declare the island independent.

For its part, the Taiwanese Foreign Ministry today thanked the United States for its support.

The Ministry said it welcomes and thanks Biden and the US government for reaffirming their commitment to Taiwan, adding that the island government will continue to strengthen its defence and deepen its cooperation with countries such as the US and Japan in order to protect its security.