INTERNATIONAL RELATIONS
USA – Israel | Biden and Lapid pledge that Iran will not acquire nuclear weapons
Defence Redefined
Published on 16/07/2022 at 09:58 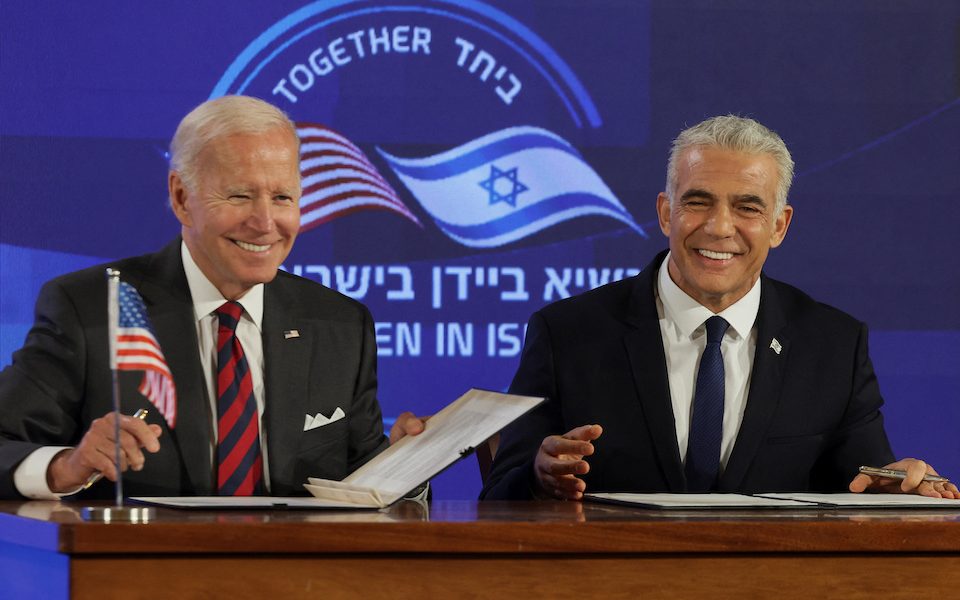 US President, Joe Biden, and Israeli Prime Minister, Yair Lapid, have signed a joint pledge that Iran will not acquire nuclear weapons.

“We will not allow Iran to purchase nuclear weapons,” said Biden during the press conference that followed the signing of the “Jerusalem Declaration”, as reported by APA MPA.

“The United States emphasizes that an integral element of this pledge is a commitment that Iran will never be allowed to purchase nuclear weapons and that it is prepared to use all elements of national power to ensure that outcome,” the declaration reads.

“The only way to stop a nuclear Iran is if Iran knows that the free world will use violence,” said the Israeli Prime Minister after the signing ceremony.

In 2015, Iran signed an international agreement to limit and control its nuclear programs. In 2018, then-US President Donald Trump pulled out of that deal, calling it inadequate, a withdrawal that Israel had welcomed at the time. Israel now says it would support a new deal but with stricter terms. Yet Iran is reacting to new restrictions.

Biden has been pushing for a return to talks, but said it was up to Iran to respond. “We will not wait forever,” said the US President.

Biden told reporters that he and Lapid also discussed how important it is “for Israel to be fully integrated into the region.” Lapid, for his part, estimated that Biden’s upcoming visit to Saudi Arabia is “extremely important for Israel”.