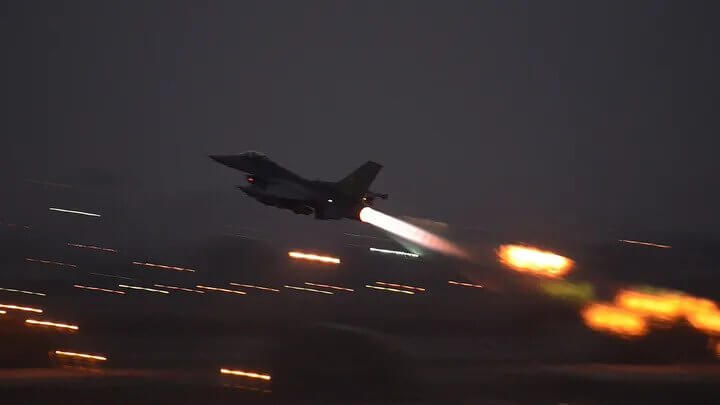 US congressmen submitted to Congress a bipartisan amendment to the US defence budget (NDAA) that prohibits the President from transferring weapons to a NATO member that has committed repeated violations of the airspace or territorial sovereignty of another NATO member this year.

The MPs who tabled the amendment, which “depicts” Turkey, are members of the parliamentary group for Greek issues in Congress. It is noted that the amendment leaves a window open that allows the President to override the restrictions if he certifies to Congress that doing so is in the vital interest of US national security.

In this context, the President should provide a detailed description of the specific measures taken to ensure that US weapons are not used for violations of the sovereignty of another NATO member.

In the joint statement issued by US Congressmen Tina Titus, Chris Pappas, Charlie Crist, Carolyn Maloney, Frank Pallone, and John Sarbanes, they acknowledge that Ankara’s retreat in its opposition to Sweden and Finland joining NATO is a welcome development.

However, they remind that in the last decade, Turkey has not been a productive member of NATO, nor a reliable ally of the US and point out that there are still too many outstanding issues which should not allow the transfer of F-16s to Turkey.

In particular, in their joint statement, the US lawmakers emphasize that:

On June 30, President Biden confirmed his intentions to proceed with the sale of F-16 fighter jets to Turkey. In his remarks, he noted that before proceeding with any arms sales and transfers, Congress would have to approve the request.

While Turkey’s backtracking on its opposition to Sweden and Finland joining NATO is a welcome development, there are still too many outstanding issues not to proceed with the sale of F-16s to the Erdogan government. Over the past decade, Turkey has not been a productive member of NATO or a reliable US ally.

Turkey, specifically the Defence Industry Directorate, remains under sanctions through the Countering America’s Adversaries Through Sanctions Act (CAATSA) as a result of its purchase of the Russian S-400 missile defence system. The Biden administration has not provided answers on how Turkey would qualify to be exempt from those sanctions and how the administration would mitigate the risks of the F-16s co-existing with a Russian weapons system. After all, this is why Turkey moved away from the F-35 program.

Since the beginning of 2022, Turkey has violated the airspace of NATO ally Greece more than 2,377 times, including 120 overflights over Greek territory. Turkey’s competitive actions in the Aegean as well as its hostile attitude towards the Greek government make it clear that the Turks do not intend to suspend these aggressive and destabilizing actions anytime soon.

If the United States were to proceed with the sale of F-16s, US-made warplanes would undoubtedly be used to violate Greek airspace. That would violate the Arms Export Control Act, which only allows the transfer of equipment for legitimate self-defence operations. Over the past seven months, none of Turkey’s actions in the Aegean in relation to Greece could be described as defensive, but rather as an act of intimidation. The US administration has not provided information on how it is working to stop Turkey from these hostile actions towards a US ally.

Finally, in addition to Turkey’s aggression in the Eastern Mediterranean, President Erdogan has announced that he is on the verge of a new invasion of Syria with the specific intention of targeting Kurdish forces in the North. Many of these forces have fought in the past and assisted US operations in the region.

If Turkey were to acquire F-16 fighter systems, they would clearly be used in this new offensive against our Syrian Kurdish allies. The administration has not provided information on how it will ensure that these individuals, on whom we have relied in the past and may need to do so again in the future, are protected from US-deployed weapons.

Until the administration can provide appropriate answers as to how it intends to mitigate the aforementioned concerns, we will continue to oppose this arms transfer and do everything we can to ensure that these F-16s will not be handed over to the Turkish government.

With information from: APA MPA, ertnews.gr