US National Guard | From the Capitol corridors to underground parking – What the new US president said about the unacceptable events
Defence Redefined
Published on 23/01/2021 at 13:58 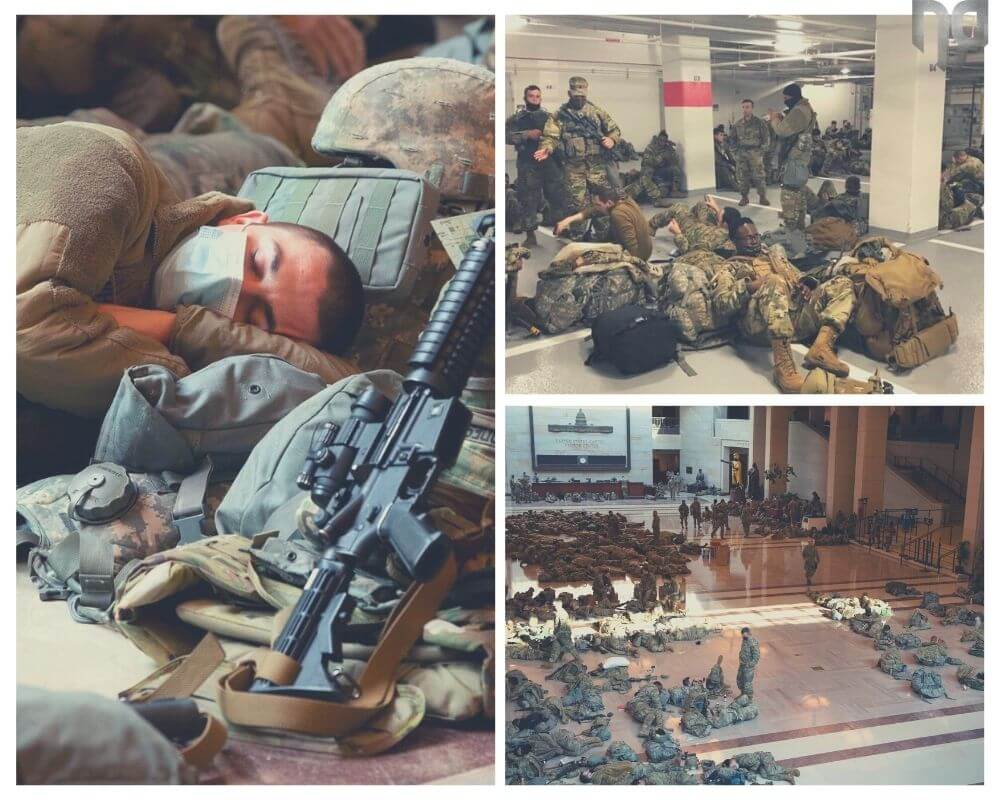 After the disturbing images of the US National Guard troops, literally lying on the floors of Capitol Hill, new images from an underground car park turned into a “dormitory” for the military, sparked outrage in the US.

National Guard troops protecting the U.S. Capitol set up cots over the weekend after recent video showed them resting on the floor. https://t.co/JpbSoVvVi7 pic.twitter.com/qKQ1zvxgJw

Nearly 26,000 National Guard troops were deployed to Washington DC across the country after the 6th of January riots to ensure a safe inauguration for Joe Biden.

Also read: USA | Armed protesters and 25,000 National Guard soldiers in the streets ahead of the Biden inauguration – VIDEO

The special security operation announced by the US Secret Service for the inauguration ceremony of the president ended on Thursday at noon.

Remember all those photos of National Guard members snoozing in the Capitol building?

Well, they've since been kicked out of the Senate office buildings and are being forced to sleep in congressional parking garages now https://t.co/Cg6v4GmNHb pic.twitter.com/mbgJKqESmb

Hundreds of soldiers were suddenly evicted from the Capitol and forced to look for a new place to sleep, including nearby congressional parking garages. The US military, according to international media, does not have access to toilets and sockets to charge the troops’ devices. Apart from that, the place is crowded and people are exposed to exhaust fumes. This decision left many troops with a feeling of disappointment and humiliation.

REPORT from the parking garage where National Guard troops were re-assigned to take breaks instead of the US Capitol. Good news is they are allowed back & are packing up here. We brought hot soup that we are giving as they get onto buses & will serve back at the Capitol as well! pic.twitter.com/yb2cUk1XLF

“It’s f**ked up because it just shows how politicians really feel about the National Guard,” one of them told Task & Purpose. “Leaving our families for the last two weeks to come down here … it’s certainly important and historic, but the day after inauguration you kick us literally to the curb? Come on, man.”

“The next time DC calls, we will let it go to voicemail,” a soldier interviewed by Military Times joked.

Hundreds of Guard soldiers relegated to the Senate garage, breathing in exhaust fumes and covid. Story coming in a bit pic.twitter.com/8OW4frePOh

The new US President Joe Biden called the chief of the National Guard Bureau on Friday to apologise and ask what could be done, according to US media reports.

First Lady Jill Biden also visited some of the troops to thank them personally, bringing biscuits from the White House as a gift.

“I just wanted to come today to say thank you to all of you for keeping me and my family safe,” she said.

Also read: USA | Four dead in the incidents at the US Capitol – VIDEO

Many politicians have expressed concern about the living conditions of soldiers, some of whom have also been infected with the coronavirus.

A US official, speaking anonymously to Reuters news agency, said on Friday that between 100 and 200 of those deployed had tested positive for Covid-19. The figure, however, has not been publicly confirmed.

Chuck Schumer, a Democrat and the new Senate majority leader, said that the move was “an outrage” and pledged it “will never happen again”.

Ron DeSantis, Florida’s governor, was among those who said he had ordered guards from his state to return home following the controversy.

“This is a half-cocked mission at this point and the appropriate thing is to bring them home,” he told Fox News on Friday.

Infamous US House of Representatives member and activist, Alexandria Ocasio-Cortez, also said on Twitter that her office is open to any member of the Service who needs a place to rest and even sleep on the couch.

Yeah this is not okay.

My office is free this week to any service members who’d like to use it for a break or take nap on the couch. We’ll stock up on snacks for you all too.

(We’re in the middle of moving offices and it’s a bit messy so don’t judge, but make yourself at home!) https://t.co/JyEvC4kg6o

However, we still do not know the reasons why the global superpower with a defence budget of $ 705.4 billion for 2021 has not been able to deploy proper field camps or even to provide adequate living spaces for its members.