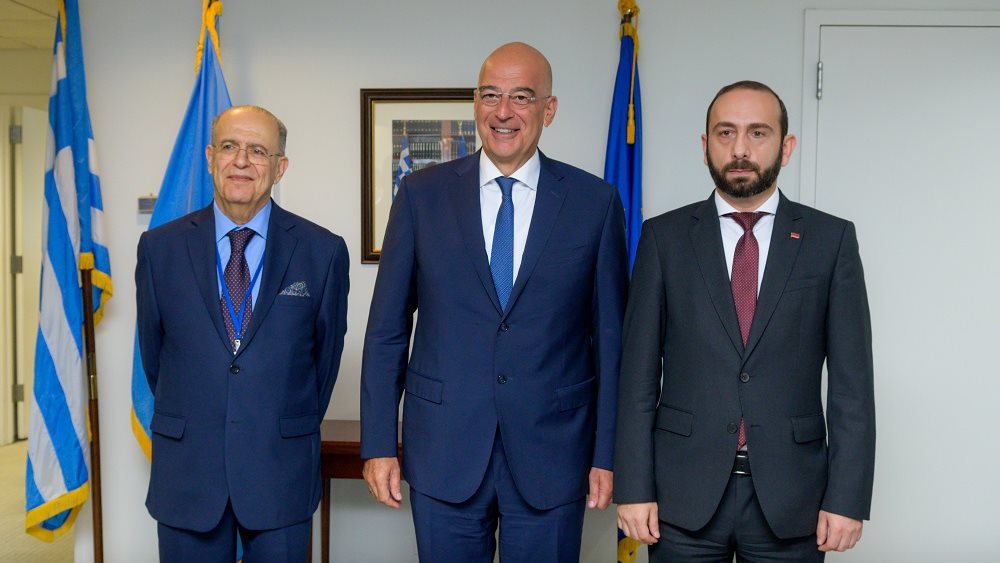 A Greece-Cyprus-Armenia trilateral meeting was held in New York, as part of the High-Level meetings of the 77th UN General Assembly.

During the meeting, Greek Foreign Minister, Nikos Dendias, had the opportunity to discuss with his Cypriot and Armenian counterparts the escalation of Turkish rhetoric, the prospects for resolving the Cyprus issue as well as the recent bombing of Armenian territory by Azerbaijan and the EU-Armenia relations.

Any revisionism, wherever it comes from, whatever country it derives from – and, in fact, with the attempt to use energy as a weapon against certain states and to attempt changes on the ground – will find them opposed.

Greece and Cyprus are always side by side with one axis and one common principle: adherence to International Law, to the rights of independence and territorial integrity of all states, and, of course, to the International Law of the Sea, concluded Mr. Dendias.

This was followed by a bilateral meeting between Nikos Dendias and the Cypriot Foreign Minister, Ioannis Kasoulidis, in order to continue the ongoing coordination and close cooperation between Greece and Cyprus on all current issues, in view of the contacts that the two Ministers will have on the sidelines of the UN General Assembly.

In this meeting, Nikos Dendias conveyed Greece’s satisfaction with the lifting of the US embargo on the sale of arms to the Republic of Cyprus.

“The US Secretary of State, Antony Blinken, but also Senators Menendez and Rubio should be thanked. Yet I would like to say that in essence, this is a reward for the consistent attitude of the Republic of Cyprus all these years. A reward for the existing perception of total cooperation against any form of aggression,” said Mr. Dendias. The two Ministers also expressed their concern over Erdogan’s threats.

Mr. Kasoulidis declared himself satisfied with the lifting of the arms embargo in Cyprus, while he expressed the solidarity of the Republic of Cyprus towards the Armenian people who, as he said, are suffering once again.

The Greek Foreign Minister stated that together with the Greek Prime Minister, Kyriakos Mitsotakis, he will hold a total of 40 meetings with the ultimate goal of deepening existing relations, but also to explain to all interlocutors the constructive role that Greece plays in its wider region – in the Balkans and the Eastern Mediterranean – but also to promote the great national issue of Cyprus.