INTERNATIONAL RELATIONS
Ukrainian War | Ukraine’s reconstruction at the heart of a two-day international conference in Lugano, Switzerland
Defence Redefined
Published on 04/07/2022 at 17:28 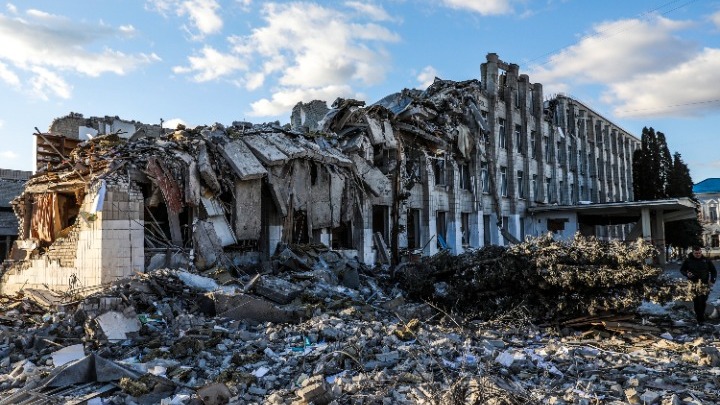 Ukrainian President, Volodymyr Zelensky, is expected to highlight today the enormous reconstruction task ahead of his country after the Russian invasion, during a two-day conference in Lugano, Switzerland.

“The task is truly colossal,” he admitted yesterday, Sunday, referring to the conference which is held with the participation of international institutions as well as the private sector. The Swiss hosts had hoped that the Ukrainian President would also attend the meeting, but he will eventually take part – as he very often does – virtually.

The task will be difficult. The end of the war, which broke out on February 24 with the Russian army’s invasion of Ukraine, remains uncertain, despite heavy economic and military aid given to Kyiv by its allies and a slower-than-expected Russian advance.

The Ukrainian Prime Minister, Denis Smigal, the Speaker of Parliament, Ruslan Stefanchuk, and a delegation of 100 people arrived in Lugano on Sunday.

European Commission President, Ursula von der Leyen, Czech Prime Minister, Petr Fiala – whose country has held the EU’s rotating presidency for this semester – and his Polish counterpart, Mateusz Morawiecki, will be in Lugano to draw up a sort of Marshall Plan for the reconstruction of Ukraine.

According to APA MPA, the conference was scheduled before the outbreak of the war and initially aimed to focus on the reforms that should be made in Ukraine, mainly in terms of dealing with endemic corruption.

Also read: Russia to Lithuania | “Our response to Kaliningrad will not be merely diplomatic”

The event in Lugano will not be a pledging conference, where each of the participants announces the provision of resources for Ukraine, but it is mainly aimed at defining the principles and priorities of a rebuilding process.

For Robert Mardini, director-general of the International Committee of the Red Cross, it is crucial to give “a positive perspective to citizens”, as he explained to the Swiss state broadcaster RTS.

The Kyiv School of Economics has estimated the cost of the damage caused so far to Ukrainian buildings and infrastructure at nearly $104 billion. The country’s economy is estimated to have already lost $600 billion, according to some estimates. The European Investment Bank is expected to propose the creation of a new fund for Ukraine, which is set to reach 100 billion euros, competent sources said.

Britain, one of the countries that is very active in helping Ukraine, will mainly support the reconstruction of the city and region of Kyiv, following Zelensky’s request, the Foreign Office confirmed yesterday, Sunday. London also plans to work with Kyiv and its allies to host a conference on Ukraine’s recovery in 2023 and set up an office in the British capital to coordinate the reconstruction work.