The Russian forces have suffered a major blow, as one of the most emblematic warships of Russia, the Moskva cruiser, which is involved in the war in Ukraine, has been severely damaged.

Satellite images affected by major storms in the Black Sea could not yet confirm the ship’s impact or current condition, but analysts said a fire on such a ship could lead to a catastrophic explosion that could sink her.

Yet, the information from Russia and Ukraine about what is really happening is different. According to sources from Ukraine, the ship has already sunk, something denied by the Russian Ministry of Defence.

Also read: NATO | One step before Finland joins the alliance

Specifically, according to the latter, the Moskva cruiser is still sailing. The main missile armament has not been damaged, while the crew of the cruiser was evacuated on the ships of the Black Sea Fleet in the area.

The Ministry of Defence added that the ignition source has been identified and there are no more fires, while the ammunition explosions have stopped. Specialists are now working on towing the ship to port and on determining the causes of the emergency.

According to the Russian state news agency TASS, the damage was caused by a fire that broke out on the cruiser which in turn caused the explosion of the ammunition on board.

There are a few pieces of ammunition that could cause serious damage to the hull as a result of a fire. This would be a P-1000 “Vulcan” anti-ship missile with a warhead, in the usual 500 kg version, or one of the missiles of the S-300F system, a naval version of the S-300 that could have exploded inside the launcher.

On the other hand, Ukrainian officials claimed earlier that the Russian cruiser was hit by Neptune anti-ship missiles. “Neptune missiles protecting the Black Sea have caused extensive damage to this Russian ship,” said Maxim Martchenko, the Ukrainian governor of the Odessa region (south). 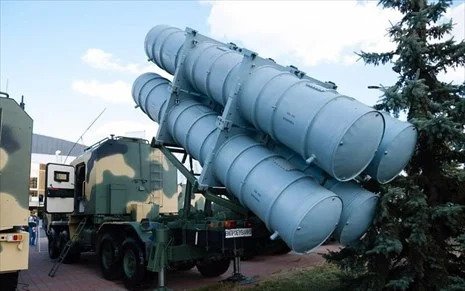 Ukraine conducted the first flight test of the Neptune coastal anti-ship missile in June 2020. Neptune first appeared at a weapon systems exhibition in Kyiv in 2015 and joined the arsenal of the Ukrainian Navy in 2021.

The Neptune coastal defence system includes a USPU-360 portable launcher with four canisters, a TZM-360 transport/refueling vehicle and a command vehicle. As for the missile, it is a guided anti-ship cruise missile. The design of Neptune is based on the Soviet subsonic missile Kh-35 and features upgraded electronic equipment and a longer range than the Russian missile in question.

During the flight, the missile initially moves at a height of 10-15 meters from the surface of the land or the sea, but as it approaches its target it descends (sea-skimming) to 3-10 meters to avoid detection by enemy defence systems.

A recent piece of information that is circulating is even more interesting, as it concerns the involvement of Turkish Bayraktar TB-2 Unmanned Aerial Vehicles in the operation to neutralize the emblematic Russian cruiser Moskva.

The use of Bayraktar is believed to have been part of a tactical deception and distraction, as the Russian warship crews focused on the Ukrainian TB-2s, the Ukrainians launched more than one cruise missiles with a greater chance of success.

The Soviet-made cruiser was put into service in 1983, when she was called Slava (“Glory”). The ship’s name was changed (to “Moscow”) after the dissolution of the former Soviet Union. The cruiser was deployed in the second half of 2015 in the eastern Mediterranean to protect the Russian Khmeimim airbase in Syria, according to TASS. 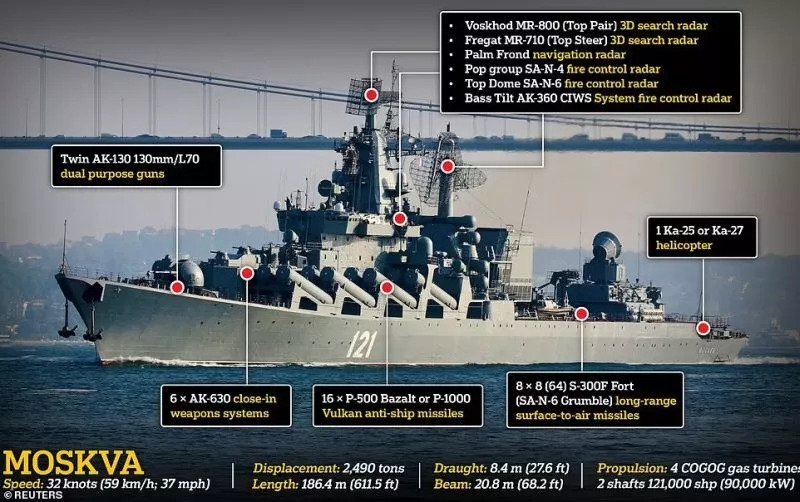 Her role is clearly the surface war against the US Aircraft Carriers’ Strike Groups, with secondary anti-submarine capabilities, but also strong anti-aircraft defence capabilities.

The ship’s air defence is provided by 64 S-300F Fort missiles with a range of 90 km mounted on eight-cylinder vertical launchers, by two 4K33 OSA-M systems, while the close-in air defence is based on six CIWS AK-630 systems, which have a 30 mm six-barrel cannon.

Her loss – regardless of the reason – is a blow to the morale of the Russian Armed Forces and to the international status of Russia, which respectively strengthens Ukraine and NATO at various levels. At the same time, the incident is “smearing” Putin’s profile, undermining international prestige and challenging the status of the Russian Armed Forces.

It is worth noting that if the 12,000-ton Moskva sank, it would be the largest wartime sinking since World War II, while the Russian fleet currently suffers a large “gap” in the Black Sea region’s air defence system.

The “coincidence” with the blow to the Russian flagship 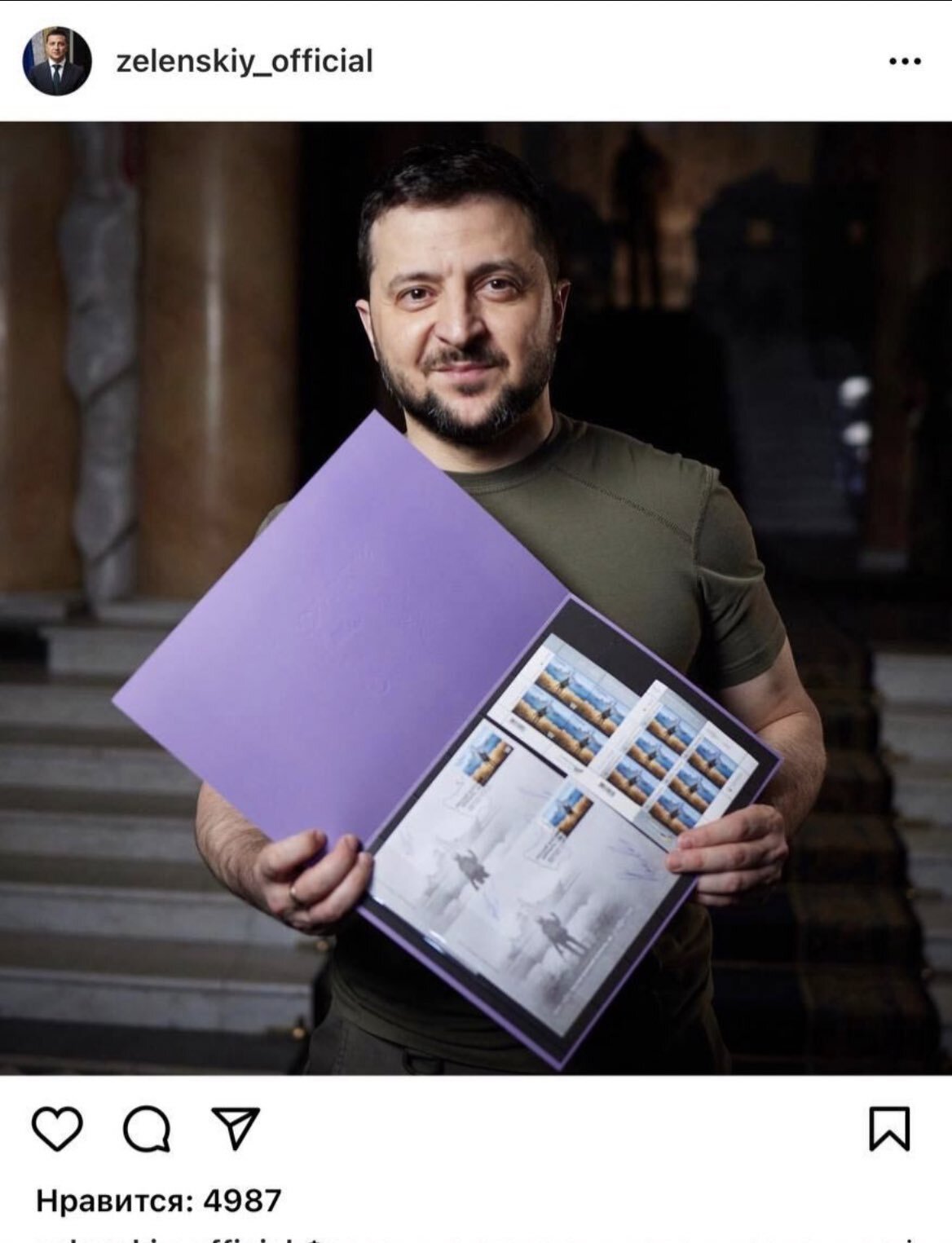 On the morning of the same day that the Russian ship was hit, the Ukrainian President, Volodymyr Zelensky, presented the new stamp of the country, in honor of the heroic resistance of the border guards, which represents one of them raising his finger towards Moskva! 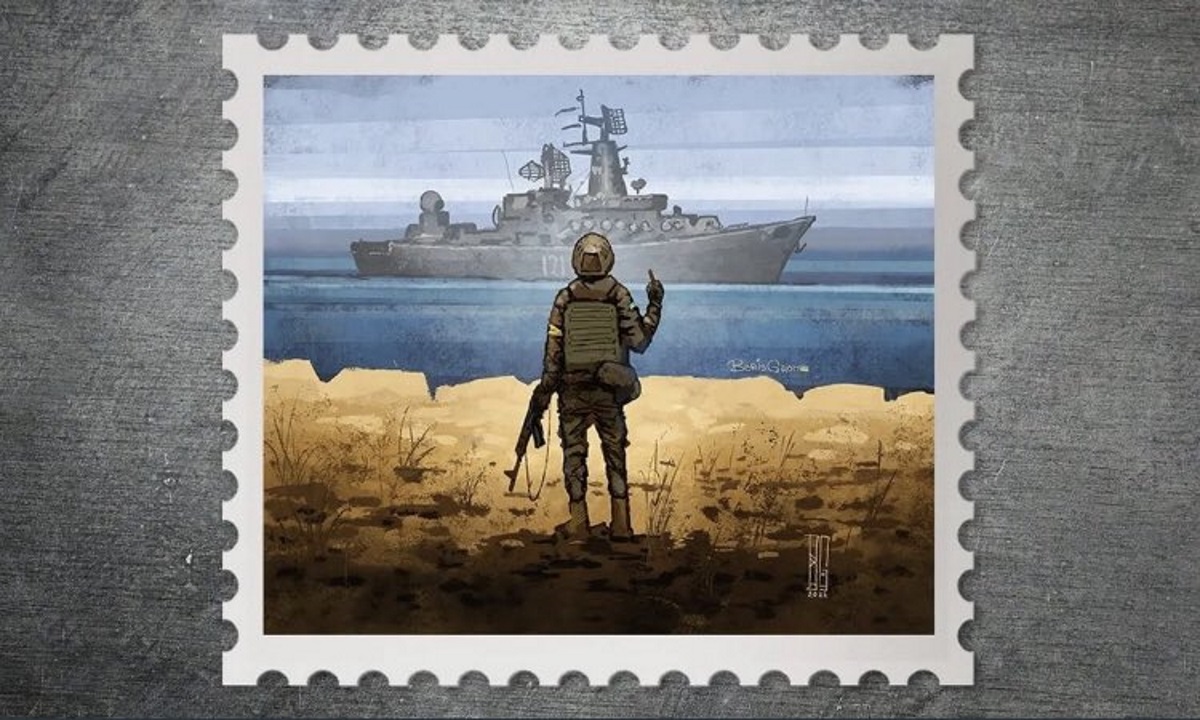 Also read: UN | Some 1,500 civilians have been killed in Ukraine so far