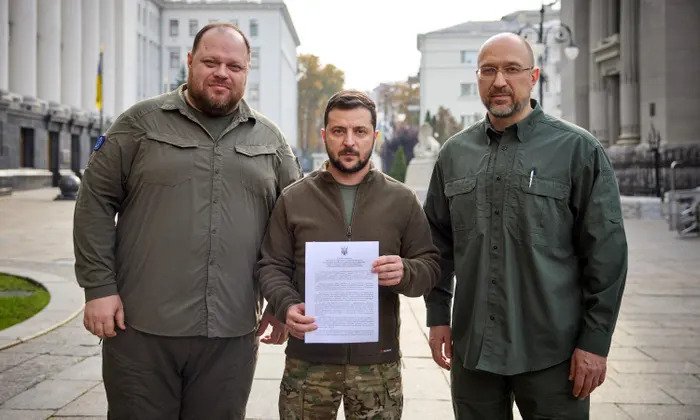 In his speech shortly after his Russian counterpart signed the annexation of the occupied Ukrainian territories, Zelensky stated that they are taking the decisive step, signing Ukraine’s application for accelerated accession to NATO.

What exactly is meant by “accelerated” NATO membership remains unclear, since the participation of a country in the North Atlantic Alliance requires the unanimity of the member-states.

In his statements, the Secretary General of the Alliance, Jens Stoltenberg, pointed out that the Allies support the right of Ukraine to choose which path to follow, but reminded that the decision should be taken unanimously by all 30 members of the Pact.

Zelensky said Ukraine has de facto demonstrated its compatibility with Alliance specifications, as they are a reality for Ukraine, on the battlefield and in all aspects of the interaction of the two.

It is noted that during these seven months since Russia invaded its neighboring country, Ukraine has replaced its Soviet-era weapon systems with NATO equipment, a process that is still ongoing.

Zelensky on Friday discussed with his country’s military leadership the further plan to liberate the Ukrainian territories occupied by the Russians. He said via Telegram that they also discussed the issue of arms supplies for the country’s Armed Forces as well as possible further plans by Russia after its invasion of Ukraine.

In the talks, which took place as President Vladimir Putin prepared to declare the annexation of Ukrainian territories seized during Russia’s invasion of Ukraine, Reznikov said Austin had reaffirmed Washington’s intent not to recognize the referenda held in the four Ukrainian provinces which Kyiv and the Western governments called illegal and coercive.

Finally, in a speech on Friday night, Volodymyr Zelensky announced that his country’s government plans to nationalize all Russian assets on Ukrainian territory.

Since the beginning of the Russian invasion, Ukraine has been confiscating and freezing the assets of natural and legal persons on its territory. In July, for example, a court in the Kirovograd region froze the assets of four Russians, the value of which exceeded $200 million.

The court found that the Russians had business rights in three related companies. All three had committed money laundering acts. The names of the Russians are not mentioned, Euronews reports.