INTERNATIONAL RELATIONS
Turkey | Erdogan meets with officials of the Libyan leadership in Ankara
Defence Redefined
Published on 04/08/2022 at 15:15 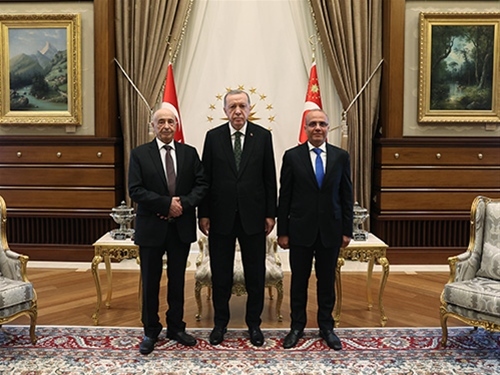 Recep Tayyip Erdogan had a meeting with officials of the Libyan leadership in Ankara, which seems to be intensifying the attack of friendship towards the African country.

In particular, the Turkish President welcomed the member of the Presidential Council, Abdulal al-Lafi, and the President of the House of Representatives of Libya, Aguila Saleh, who attended constructive talks in Athens a year ago.

Al-Lafi, in a post on Twitter, said that at their meeting in Ankara they agreed to avoid escalation and ruled out a military solution.

“We met today, in Ankara, with President Erdogan in the presence of the President of the House of Representatives, Councilor Aguila Saleh. We discussed the political developments and agreed to preserve the unity of Libya, to speed up the holding of elections through the necessary legislation, through a strong government, underlining that a military solution is ruled out,” he said.

In turn, Saleh, according to Libyan press reports, emphasized the “historic ties between the Turkish and Libyan people” and the desire “to keep all channels of dialogue open” in order to ensure peace and stability in Libya.

He explained that the priority of the new government, which won the confidence of the House of Representatives, is to ensure the holding of parliamentary and presidential elections in the country, stressing the importance of Turkey’s support to Libya to ensure peace and stability.

It is worth noting that Saleh met about a year ago with the Greek Minister of Foreign Affairs, Nikos Dendias, in Athens.

The Greek Foreign Minister had thanked Saleh for his stance in favor of holding fair elections in the country and especially in favor of the removal of all foreign military forces and mercenaries from the Parliament.

The Turkish presidency announced Erdogan’s meeting with Al Lafi and Saleh, stating that “during the meeting the interlocutors agreed on the importance of maintaining the unity of the Libyan territory, speeding up the electoral process through the necessary and agreed legislation, emphasizing that a military solution is ruled out and that the cessation of any form of escalation that prevents a civil and democratic state to be built.”

Libya risks slipping back into chaos as armed group clashes now take place daily, even in the capital Tripoli, while infighting and realignment of alliances are causing concern in Greece as Turkey tries to seize the opportunity to consolidate its position further.