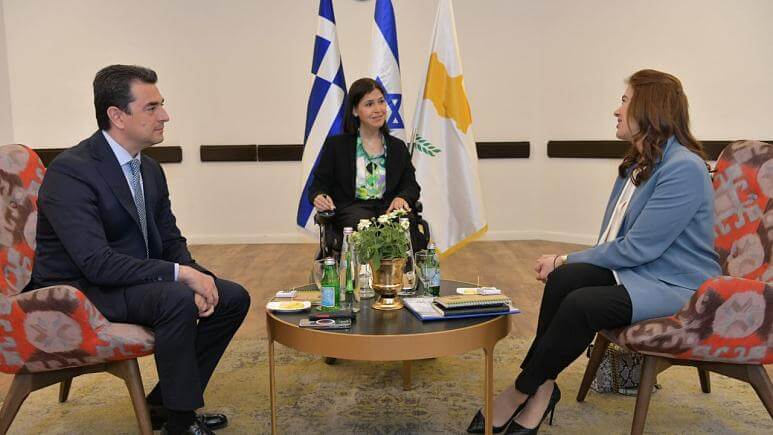 The effects of the international crisis on the energy market, the progress in the implementation of new infrastructure that will increase energy security in the Eastern Mediterranean region, and the prospects of supplying Europe with natural gas from the region’s deposits were discussed in the Tripartite Meeting of the Ministers of Energy of Greece – Cyprus – Israel. The meeting was held today, April 11, in Jerusalem with the participation of the Minister of Environment and Energy, Costas Skrekas.

In particular, according to information from the Ministry of Energy, Mr. Skrekas discussed with his counterparts from Israel and Cyprus, Karine Elharrar and Natasa Peleidou respectively, about the effects of the international energy crisis which has escalated since the Russian invasion of Ukraine.

The three Ministers also discussed the deepening of the tripartite strategic partnership and the emblematic projects promoted in the Eastern Mediterranean region, which will enhance energy security and contribute to the diversification of energy supply sources and routes – such as the EuroAsia Interconnector project aiming at Greece-Cyprus-Israel electricity interconnection and the EastMed gas pipeline.

The Tripartite Summit considered the possibility of transporting Liquefied Natural Gas (LNG) by ships from the Eastern Mediterranean to European markets, utilizing the gas liquefaction facilities available in Egypt. The Ministers also agreed to investigate the construction of an LNG station in Cyprus for the optimal exploitation of the natural gas fields of the Eastern Mediterranean.

After the Summit, Mr. Skrekas said: “With my counterparts from Israel and Cyprus we discussed ways to strengthen our strategic cooperation in energy, which has become even more important after the Russian invasion of Ukraine which feeds the worst energy crisis in decades.

By exploiting the gas fields of Israel and the Eastern Mediterranean, countries can make a significant contribution to diversifying energy sources and routes and to making Europe independent of Russian fossil fuel imports. We talked about the emblematic projects we are promoting in the region, which will enhance the adequacy of supply and can lead to a gradual de-escalation of high energy costs. Such projects are the Greece-Cyprus-Israel electricity interconnection, the EastMed gas pipeline, and the possibility of transporting liquefied natural gas from the Eastern Mediterranean to European markets, with the utilization of the Egyptian facilities and the construction of a new LNG station in Cyprus. These projects will benefit our countries, the wider region, and Europe, as they enhance energy security and our cooperation with our strategic partners while promoting security, prosperity, and stability in the wider region.”

Israeli ambassador on the EastMed

It is the national interest of the countries in the region that will determine the decisions for projects such as the EastMed, stressed in an interview with the Athenian / Macedonian Press Agency the Israeli ambassador to Greece, Yossi Amrani, explaining that the issue is now more critical because of the war in Ukraine and that we must immediately ensure that energy needs are met.

Specifically, in terms of the EastMed, he reiterated what he said in a discussion at the Delphi Forum that the main aspect of the relevant decisions is “the interests of the countries of the region” and these countries will make “through their own direct communication – bilaterally, trilaterally and beyond – the right decision to serve their national interest.”

Responding to the criticism that the pipelines are time-consuming and mainly costly projects, the Israeli ambassador notes that we should not rule out anything and that in the end “what has to be decided is the national interest and the interest of energy diversity in Europe and how it is better served.”

Also read: KYSEA | Extraordinary meeting on country’s energy security in the shadow of the Ukrainian crisis

Regarding the EastMed gas pipeline, Nikos Dendias said that it is “alive” using the expression “alive and kicking”. He stressed that from the beginning the precondition was the financial viability of the project and added that Victoria Nuland raised the issue of financial viability and the issue of time horizon. So, as she noted, the US Undersecretary does not say that the EastMed is dead as a project, but that it is useless in the period of detoxification.

He went on to say that the sly thing about those who say the EastMed is dead is the underlying geopolitical argument. In this regard, he stressed, the US side supports the EuroAsia Interconnector, the transmission of electricity, which has exactly the same direction as the EastMed, and concluded that there is no geopolitical argument against the latter,, but an economic argument of reflection. Commenting on the US Undersecretary’s report in favor of LNG, Nikos Dendias said that it is understandable, as the US is selling LNG, and added that it is natural for a US Secretary of State to be in favor of selling it.

At the same time, on Friday, from the 7th Delphi Economic Forum, the Commissioner for Economic Planning and Budget, Johannes Hahn – in addition to supporting the development of more APA – was clearly in favor of building a pipeline that will transport gas from Egypt to Europe through Greece and of its financing by the European Union.

The pipeline will be supplied from two sources; on the one hand, from the deposits of Egypt, and on the other hand, with LNG that will be transported from Cyprus and Israel, where it will be liquefied and then channeled through the pipeline to Greece and Europe.