SECURITY
Thrace | Commencement of the implementation of the new Liquefied Natural Gas terminal station in Alexandroupolis
Defence Redefined
Published on 03/05/2022 at 09:00 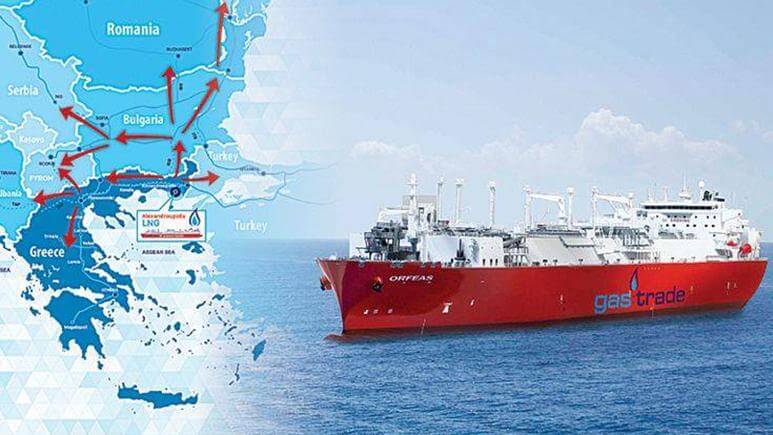 The implementation of the terminal station of Alexandroupolis Independent Natural Gas System starts officially at noon on Tuesday.

According to Euronews, the project includes the construction of a floating station for the receipt, storage, and regasification of Liquefied Natural Gas LNG (FSRU), at a distance of 17.6 km southwest of Alexandroupolis and 10 km from the nearest coast. The station will be able to deliver 5.5 billion cubic meters of natural gas per year.

With the new terminal, about to start its operation in December 2023, the following are achieved:

The inauguration ceremony will take place at 2:30 pm on Tuesday at the Customs Warehouse. The importance of the project is reflected in the presence at the port of Alexandroupolis of the President of the European Council, Charles Michel, the Prime Ministers of Bulgaria, Kiril Petkov, of Northern Macedonia, Dimitar Kovacevski, and the President of Serbia, Aleksandar Vuc.

The Kopelouzos group, Gaslog Cyprus Investments Ltd, DEPA Emporias SA, Boulfartrabsgaz EAD, and DESFA SA participate in the construction company Gastrade. The Prime Minister has already announced in Parliament that a second floating liquefied natural gas storage and regasification station will be built, with the same capacity, in the Thracian Sea.

Also read: Meeting on energy efficiency | “Greece is and will remain energy secured”

The ceremony will end with the signature of the Prime Ministers of Greece and Bulgaria.

Prime Minister, Kyriakos Mitsotakis, spoke about the importance of the new Alexandroupolis terminal at a recent Cabinet meeting and, after saying that Greece is already assisting its friends and neighbor Bulgaria in the energy sector, he noted: “On Tuesday, together with other Balkan leaders, I will be in Alexandroupolis, at the new liquefied natural gas storage and gasification station.

A very important infrastructure project, which, in combination with other initiatives will have enabled us – in less than 20 months – to fully diversify our sources of supply in Natural Gas, not only for our country, but also for the whole Balkan Peninsula.

Greece, therefore, quickly and very methodically, becomes an energy hub of the region, but, at the same time, a strategic gateway for the entry of energy resources to southeastern Europe as a whole.”