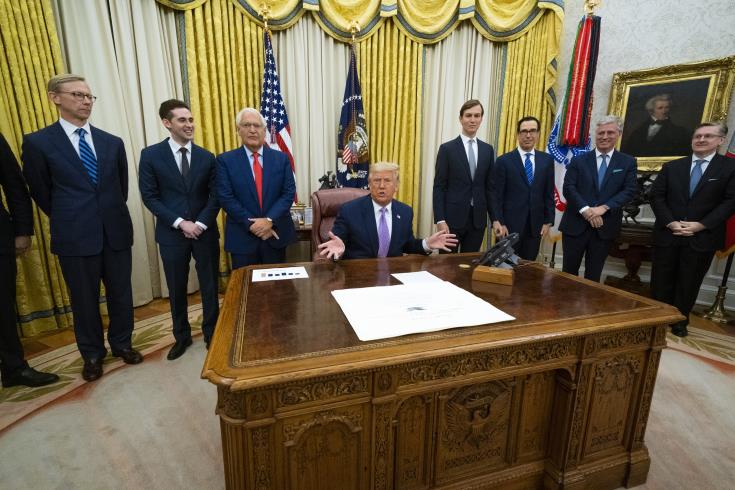 In the wake of yesterday’s historic agreement of Isreal with the United Arab Emirates, through which the normalization of bilateral relations was achieved, Nabil Abu Rounteina, one of the main advisers of the president of the Palestinian Authority, Mahmoud Abbas, said:

“The Palestinian leadership rejects and denounces the tripartite, sudden announcement by the UAE, Israel and the US.” Rudeina added that the agreement was a “betrayal of Jerusalem, al-Aqsa and the Palestinian cause.”

The Palestinians also demanded that the Arab League be convened as a matter of urgency to discuss recent developments.

Hamas said in a statement that the normalization of Israel’s relations with the United Arab Emirates “does not serve the Palestinian cause” and is a “blank check” for the continuation of the “occupation” of Palestine.

“This agreement must be rejected and condemned. It does not serve the Palestinian cause, but it is considered a continuation of the denial of the rights of the Palestinian people,” Hamas spokesman Hazem Qassem told AFP.

“Hamas believes that we should support and help the (Palestinian) people and not enter into relations with the occupier,” as many Palestinians call Israel, the official added.

Egypt, the only Arab country together with Jordan that have diplomatic relations with Israel, welcomed the agreement, which provides for the establishment of embassies on both sides, close cooperation on investment, energy, environmental protection and the development of a coronavirus vaccine, as well as a commitment on the part of Israel that it will not annex Jewish settlements in the occupied West Bank.