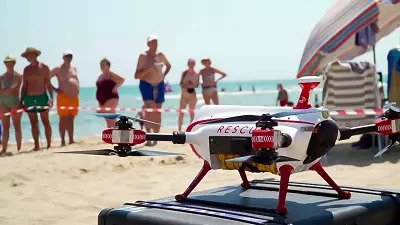 A pioneering drone lifesaving system used on Spanish beaches has saved the life of a 14-year-old boy who was struggling to stay afloat off a beach in Valencia, its operators announced.

The drone dropped a life vest into the sea that kept the child afloat just when he was about to sink, until a lifeguard team arrived a few minutes later, APA MPA reports.

“When we arrived we saw a child in very bad condition, with no energy to stay afloat, so I sent over a life vest,” said Miguel Angel Pedrero, the drone pilot on behalf of General Drones which provides the technology.

“Because of the strong waves, it was a difficult maneuver, but eventually we managed to give him the life vest and he was able to float until the lifeguards reached him by jet ski.”

General Drones, which started in 2017 to provide services in a city in the Valencia region, now has 30 pilots. Its drones are now used on 22 beaches in Spain providing a rapid response in critical situations before lifeguards can reach the incident site.

“These extra seconds are vital in some cases and allow rescue teams to approach the person more calmly and carefully,” explains Miguel Angel Pedrero.