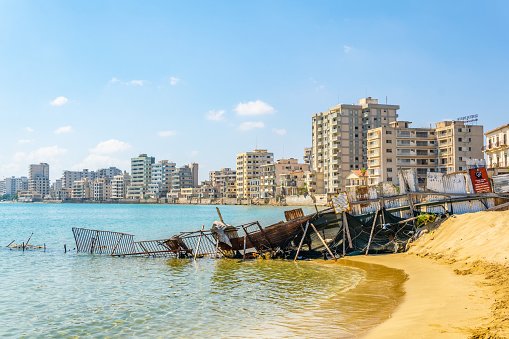 Greece welcomes the statement made by the Security Council President on Varosia, which explicitly condemns the Turkish and Turkish-Cypriot leadership’s stance on the declassification of the enclosed area of ​​Varosia.

The important differences with the previous statement, however, are that for the first time there is an explicit reference to the condemnation of these announcements and not merely an expression of “deep concern”.

“The statement stresses that the Security Council requests the overturn of all actions that have taken place in Varosia since last October and it also underlines that one-sided actions must be avoided, actions that come against the Council’s resolutions and may escalate the tension. Furthermore, the Council states the need for respect and implementation of its resolutions, including the transfer of Varosia under UN administration. The importance of this point lies in the fact that the Security Council considers that the illegal Turkish actions have an impact not only in Cyprus, but also the UN itself.

Finally, the Security Council reiterates that the settlement of the Cyprus issue should be based on a bi-communal bi-zonal Federation, as defined in its relevant decisions, thus rejecting, once again, any solution proposed by the Turkish side beyond this context,” underline Greek diplomatic sources.

In Athens, it is noted that the introduction of the above wording is a result of the close coordination between Greece and the Republic of Cyprus. “The contacts of the Prime Minister Kyriakos Mitsotakis with the President Nikos Anastasiadis are noted, but also the continuous coordination between the Minister of Foreign Affairs Nikos Dendias with his Cypriot counterpart Nikos Christodoulidis, both during the visit of the Foreign Minister to Nicosia the day before yesterday and during their telephone conversation held yesterday. The active contribution of the Permanent Representation of Greece to the UN is also evident, which was in constant contact with the Members of the Security Council, some of whom, such as the USA, France, China, Russia, India and Ireland played particularly constructive roles in the relevant consultations. Along with the above actions, Athens and Nicosia continue their coordination in order for the issue to be raised within the framework of the European Union Council,” the same sources conclude.