ARMAMENTS
SCORPION | The Rheinmetall lifting device for the BOXER – VIDEO
Defence Redefined
Published on 22/09/2022 at 17:20 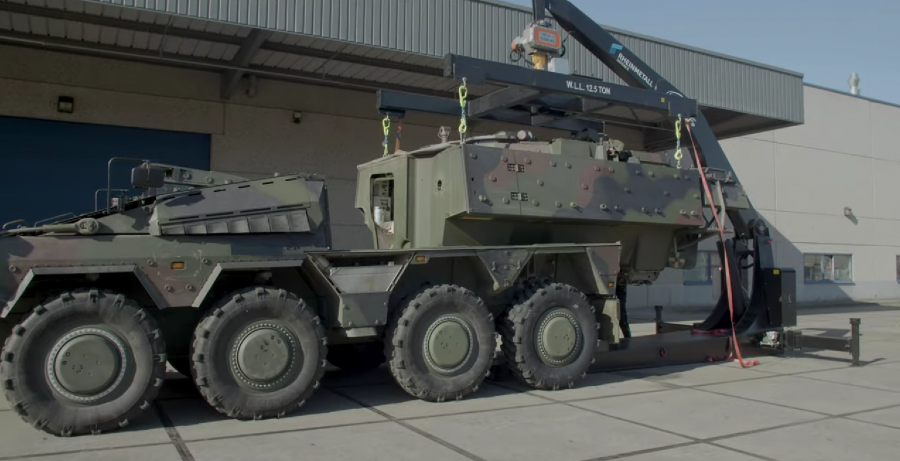 The German company Rheinmetall released a VIDEO showing the SCORPION lifting device participating in maintenance and repair work on the BOXER vehicle.

Rheinmetall’s Scorpion lifting device is a transportable jig that can be used for maintenance and replacement of combat vehicle parts, in this case the Boxer vehicle. Powered by electricity, it is easy to transport and use. The company states that it has low maintenance costs and does not require special infrastructure or tools during operational use.

The Boxer multi-role Infantry Fighting Vehicle (IFV) has been in service since 2011. Several versions of this vehicle for a variety of missions have been showcased, while the IFV version was unveiled at Eurosatory 2014. It is produced by the ARTEC GmbH group, a subsidiary of Krauss-Maffei Wegmann GmbH, Rheinmetall Military Vehicles GmbH and Rheinmetall Defense Nederland B.V. Other versions of the vehicle include the basic Armored Personnel Carrier (APC), the Command Post version as well as the Ambulance, Combat Reconnaissance Vehicle, Vilkas, Geniegroep, Cargo, Driver Training Vehicle, Repair and Recovery versions with other versions currently being trialed.