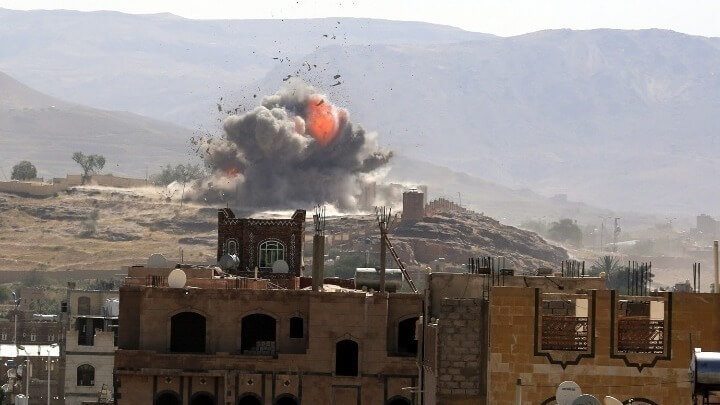 The Saudi-led military alliance, which has been embroiled in the Yemeni war, today launched attacks on areas controlled by Houthi rebels.

The alliance said in a statement that it had launched airstrikes in the Houthi part of the Yemeni capital Sanaa and in Hodeidah, a port city on the Red Sea.

The statement said that the aim is to protect global energy sources from enemy attacks and secure the supply chain and that the operation will continue until its goal is achieved. The operation is still in the early stages and the pro-Iranian Houthi rebels will suffer the consequences of their hostile behavior, the same statement underlined.

Saudi media reported earlier that the military alliance intended to deal immediately with the sources of the threat, after first warning the civilian population to stay away from oil sites or facilities in Hodeidah.

On Friday, Yemeni Houthi rebels launched attacks on oil facilities in Saudi Arabia. According to the alliance, a distribution station of the oil company Aramco was hit, resulting in a fire in two tanks, without causing any casualties.

Shortly afterwards, the alliance said it had intercepted and shot down two drones that had been launched against the Kingdom of Saudi Arabia from oil facilities in Hodeidah, Yemen. The military alliance also said it would not target civilian areas and avoid collateral damage to oil facilities.

The Al Masirah television network, which is close to the Houthi, reported that allied fighter jets had launched raids on Hodeidah, with residents reporting on Reuters attacks on the outskirts of the city. According to Al Masirah, the target of the aircraft was the port of Salif, a building of the electricity company and oil facilities in Hodeidah.

Sanaa residents told Reuters that the building housing the offices of the oil company Safer, in the southern part of the Yemeni capital, was bombed.

Saudi Arabia, the world’s largest oil exporter, had warned days ago that it would not be responsible for any disruptions in world oil supplies as a result of the Houthi attacks that have intensified over the past three weeks.