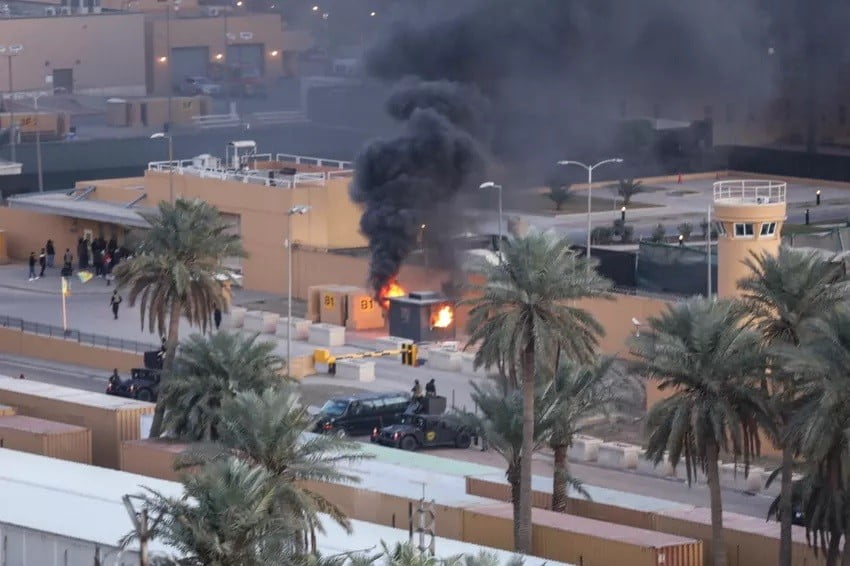 Seven rockets were fired last night at targets in Baghdad, particularly the US embassy, ​​which apparently ended a month-long truce by pro-Iranian Iraqi armed groups. The attack resulted in the death of a little girl.

The resumption of hostilities came as the new US Secretary of Defence, Christopher Miller, announced that Washington would withdraw 500 US troops from Iraq, reducing its power in the country to 2,500.

Four rockets landed in the so-called Green Zone, where the US embassy is located, while three others in districts of the Iraqi capital, killing a little girl and injuring five other civilians. The bomber struck shortly after noon following the telephone conversation of Iraqi Prime Minister Mustafa al-Qadimi and US Secretary of State Mike Pompeo.

#BREAKING: At least 4 rockets fired at US Embassy in Baghdad, comes after US acting defense secretary announces partial withdrawal of US forces from Iraq
pic.twitter.com/XjCES6qfB6

The two men discussed, according to Kadimi’s office, “the future of cooperation between Iraq and the international coalition under the US,” which was developed in Iraq in 2014 to counter the Islamic State (IS) jihadist organization. A coalition spokesman confirmed last night that the US embassy had been attacked, refusing to comment on the use of the US C-RAM system to intercept rockets.

Dozens of rockets have been fired against the Green Zone this year, but this system has not allowed them to hit the embassy building. In mid-October, pro-Iranian armed groups in Iraq announced that they would stop attacking the US embassy, ​​provided that Washington announced the withdrawal of all its troops by the end of the year. The armistice was declared against the backdrop of heightened diplomatic tensions.

Shortly before his announcement, Pompeo had sent an ultimatum to Iraqi leaders: if the rocket launches did not stop, Washington would simply withdraw all its diplomats and soldiers from Iraq. Even today, despite the victory of Democrat Joe Biden in the US presidential election, experts note that the government of Republican President Donald Trump has all the necessary documents ready to proceed with the closure of the US embassy in Baghdad.

For Washington, the nearly 90 rocket attacks in recent years – against its embassy, ​​Iraqi military bases where Iraqi military contractors are stationed – are primarily the work of Kataeb Hezbollah (“Army of God”), the most radicalized by pro-Iranian organization in the country. For many of the attacks, completely unknown organizations have claimed responsibility, which are just pseudonyms of pro-Iranian armed groups, according to experts.

Each time, these organizations demand the withdrawal of US “occupying” forces, something that the Iraqi parliament demanded earlier this year. In January, 48 hours after the assassination of Qasim Suleimani, a top Iranian general, and Abu Mahdi al-Muhaddis, an Iraqi ally in Baghdad, Shi’ite lawmakers called for the withdrawal of all foreign troops located in the territory of Iraq.

The government of that time, however, objected that it was simply managing the current affairs and was not able to implement such a measure. Kadimi’s government, which took office in May, has claimed to give a period of “three years” to the US so as to withdraw its troops.

The US deployed strong forces in the country in 2014 to counter the IS, following a first withdrawal of troops from Iraq in 2011, which they took over in 2003. A Hezbollah spokesman was quoted as saying, according to Reuters, that although the group has not set a deadline, if US troops remain on Iraqi soil, there will be more attacks.

a rocket crash .on the us embassy in baghdad iraq pic.twitter.com/TJmGzmigvj

Yesterday’s attack, if confirmed to mark the end of the pro-Iranian militant ceasefire, will further increase the pressure on Prime Minister Kadimi.