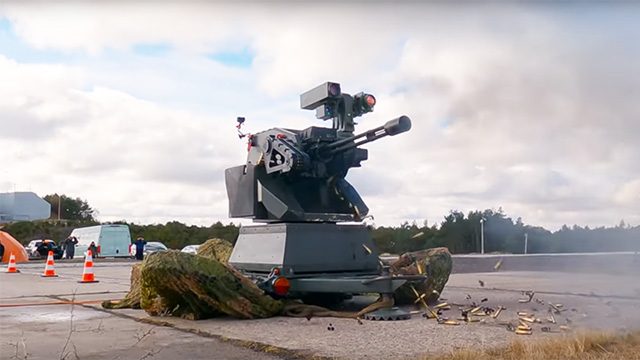 The Polish defence company Zakłady Mechaniczne Tarnów presented an anti-drone system that is based on the multifunctional RADA MHR radar and the WKLM Gatling type 12.7 mm gun.

The RADA MHR radar has the ability to track not only larger aircraft, but also those of the “nano” category or the so-called micro-objects. Depending on the size of the UVA, RADA has a different range of tracking: if the drone is in the “nano” category, the radar can track the target at a distance of up to 3 km; if it falls in the “micro” category the distance goes up to 5 km and for the Miniature class the distance is at least 10 km.

The MHR is a reliable multi-mission radar for a variety of air-defence missions such as Counter-UAS, Very Short-Range Air Defence (VSHORAD) and Counter Rocket, Artillery, and Mortar (C-RAM).

This pulse-Doppler, software-defined, S-band radar platform incorporates, among others, an AESA antenna and GaN amplifiers with advanced 4D processing capabilities. This radar is the choice for many air-defence applications such as the Stryker A1 IM-SHORAD.

The WKLM 4-barrel Gatling-type 12.7 mm machine gun can fire up to 3600 rounds in one minute. The machine gun is connected to both radar and an Electro-optic system (EOS) including a day/night (thermal) camera and a rangefinder that can automatically lock the weapon system on the target.

In addition to the aforementioned connected devices, the weapon system features a gunner station.

The system can be used to protect critical infrastructure, buildings, command posts etc. It can also be installed on mobile platforms.

The system operates in three modes:

Watch a video with the system in action below: