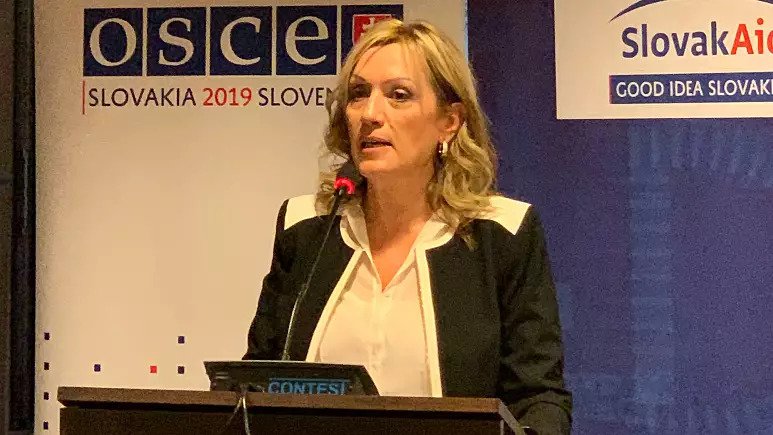 The Vice-President of the Parliamentary Assembly of the Organization for Security and Co-operation in Europe and head of the Cypriot delegation, Mrs. Irini Charalambidou, was re-elected Vice-President until 2025, receiving most votes among her fellow candidates.

The secret online ballot took place on the last day of the 29th Annual Meeting in Birmingham, United Kingdom, during the Session of the Organization.

The four vacant Vice-President seats were contested by seven candidates, including Mrs. Charalambidou. The result is considered a significant success, as the voting was held under adverse conditions for Mrs. Charalambidou, because of synergies taking place in order for her not to be re-elected.

At the initial stage of collecting signatures for the nomination of the best candidates for the office in question, Mrs. Charalambidou received the support of parliamentarians from a significant number of countries to whom she expressed her sincere thanks.

Also read: OSCE | Inspections with the participation of Cypriot officers

In fact, in her later statements, Mrs. Charalambidou said that Turkey continues to ignore the international community despite its clear appeals, ignoring international legitimacy.

Referring to the current developments regarding the Cyprus issue, Mrs. Charalambidou criticized the Turkish provocation, in particular the upcoming visit of Turkish President, Recep Tayyip Erdogan, to the occupied territories on July 20, the anniversary of the Turkish invasion, during which, as she pointed out, he intends to make announcements on the further opening of Varosia.

Mrs. Charalambidou, as mentioned, also informed the Members of the Commission about the wave of mass “naturalizations” of Turkish settlers in the occupied territories and about the strong protests of the Turkish-Cypriots about these methods, which aim, as she said, to alter the demographic character of Cyprus.

She even referred to the reactions that took place in the occupied territories against Turkey’s attempt to silence three journalists of a certain newspaper who exposed the issue of naturalizations and called on the head of the Turkish delegation to answer how these actions are consistent with the freedom of the press.

Regarding a report by the aforementioned Turkish MP about “Greek-Cypriot administration”, Mrs. Charalambidou finally emphasized that the Republic of Cyprus is an internationally recognized state, a member-state of the European Union, whether Turkey likes it or not, with the President of the Assembly pointing out that the internationally recognized names of the participating States of the Organization should be used.